Islamists' message to Israel at New York City rally: "The mushroom cloud is on its way!"

Investigative Project on Terrorism (IPT) Newswire - April 21, 2006 : The Queens-based Islamic Thinkers Society (ITS) held a rally yesterday outside of the Israeli Consulate in Manhattan. Members of the Islamic Thinkers Society are easily identified by their Khilafah flags and provocative signs as well as rhetoric against homosexuals, Jews, Christians, Danes and others, depending on the hot button issue at the moment. Yesterday's rally was held in response to Monday's Tel Aviv bombing that killed 9 and injured scores. While carrying signs including "Islam will Dominate" with a picture of an Islamic flag over the White House, the small but loud group of men chanted threatening slogans (video of the rally will be posted on the Counterterrorism Blog soon):

We are not your average Muslims, We are the Muslims of Was al Sunnah

We will not accept the United Nations, they are the criminals themselves
They get paid by the Israeli and the US government to do their job.
We don't recognize United Nations as a body
We only recognize Allah

* * *
No wonder they call you sons of apes and pigs because that's what you are.

* * *
Another mushroom cloud, right in the midst of Israel!
Takbeer!! Allahu Akbar!

The Islamic Thinkers Society (ITS) addresses the crackdown by the British authorities on Al Muhajiroun and its counterparts on the ITS website: 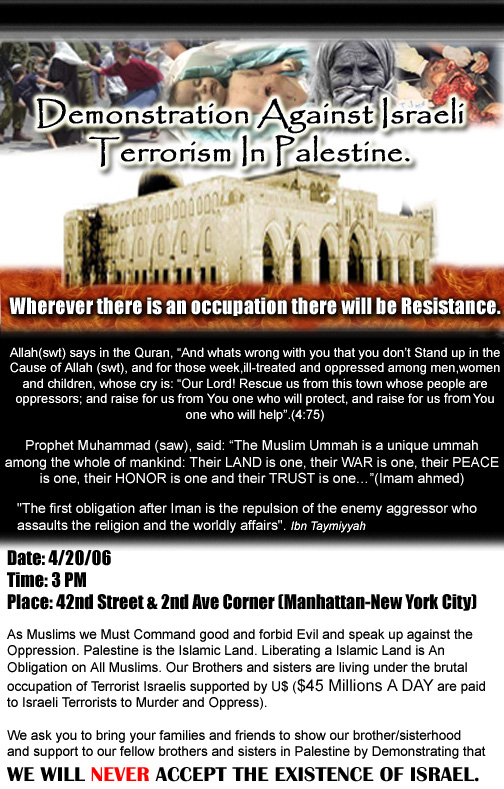