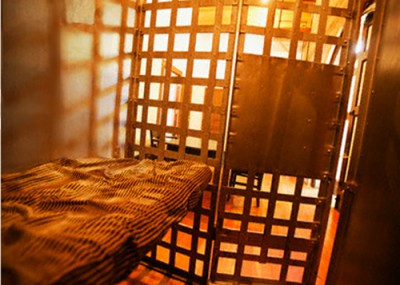 Life in prison is difficult, especially for 20 Muslim inmates at a high security unit housing 30 people in total. They miss their families, sometimes squabble among themselves and struggle to maintain hope during long days.

That's the message offered in an article published this month by the Muslim Link, an online and print bi-weekly newspaper which serves the Washington and Baltimore metropolitan areas.

Take 48-year-old Adham Hassoun, who "can joke 24 hours a day. But behind this humor hides a great concern for the Muslim Ummah," the article says. He also "is ready to help whenever called upon, and will leave behind everything which is important to him to do that, unless he is watching Stargate on the SciFi Channel."

Hassoun also is "a co-defendant of the well-known Jose Padilla, and is serving a 15 year sentence on terrorism charges," the article says. But Hassoun's conviction stems from support for al-Qaida, and his 2007 convictions for conspiracy to commit murder abroad and provide material support to terrorists included "actively recruiting mujahideen fighters and raising funds for violent jihad." In prison, though, he's good at dispute resolution, "for he holds in his heart immense mercy for his brothers."

The article, purportedly written by an inmate of the Communications Management Unit (CMU) in Terre Haute, Ind., emphasizes the prisoners' positive characteristics, concluding with a mailing address for people to write letters of support. "It is because of the sacrifices of these few that many still live in peace," it says. "It is by the virtue of their sincerity, supplication and prayer that insha Allah Islam will be victorious. Indeed it is by the virtue of their sacrifices that they are honored as the few among the few in the CMU."

According to the group that established the newspaper,"[s]everal elected officials read the Muslim Link to keep abreast of issues important to their constituents, while some governmental agencies partner with the Muslim Link to ensure their public announcements and services reach all segments of society." In addition, the Muslim Link boasts that it is "the premier source for information about the Muslim community in MD, DC and VA," and the paper won media awards for its reporting.

Among the prisoners featured in the article:

There's nothing wrong with providing moral support to prison inmates, despite whatever crimes they may have committed. But the article published by the Muslim Link minimizes their wrongdoing, or casts them as victims incarcerated for merely trying to help needy people. Instead, the article says, "readers will get a firsthand account of who these prisoners are and, since the day they were snatched from their loved ones, how they were able to maintain their sanity. Perhaps, if the world gets to know these prisoners and prays for them, Allah will bring an immediate end to their ordeal."

This is a jike, of course.

Look Jihad Jimmy et al. The word terrorist does not translate as comic, or Mr. Nince Guy, or I was just trying to help my poor cousins in difiicult circumstances. The mark of a terrorist is someone who refuses to take responsibility for being what he/she is; a terrorist is someone who knowingly plans and spreads terror which included all manner of murder, torture, and the like. I am an American and you are in my face, so to speak. Believe me, your hopes of world domination are the fundamentals of a doctrine gone to seed. You will bring destruction upon yourselves. Somewhere in the mix, you will have to come up against millions of Veterans who know what it means never give an inch. May you reap what you sew.