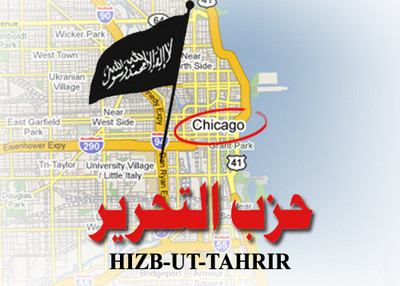 A radical Islamist group which claims a presence in nearly 50 countries is so confident it can help establish a global Muslim government – or caliphate – that it distributed a draft constitution during a recent conference outside of Chicago.

It calls for the death penalty for apostates and for creating a government department dedicated to jihad.

HT is an international movement to establish a global Islamic state, or caliphate (Khilafah). Although it is officially committed to nonviolence, HT preaches a virulent brand of hatred for the United States, and for Western democracy in general. Its alumni include such violent Islamists as Khaiid Sheikh Mohammad, mastermind of the 9/11 attacks, and the late Iraqi jihadist Abu Musab Zarqawi. Hizb ut-Tahrir has been described as a "conveyor belt" of terror.

At the conference, activists portrayed Islam as the only real force in the world standing up to the United States and the West. With Soviet communism gone, the West is now confronted with the threat posed by Islam, said a speaker identified as Reza Imam. He has served as a spokesman for the organization.

"And they see the return of Islam," he warned. "And this, brothers and sisters, is the shaking [of] the thrones." Islam's foes "see the coming revival of Islam, and they know what that means and they know what it means for their policies," Imam said.

The pamphlet, entitled "Khilafah State Structure: Introduction to the Constitution," contains charts illustrating how a caliphate government would function along with a draft constitution.

The caliphate government would establish an "Internal Affairs Department" which would include a division of "Apostasy."

Waging jihad would be a top priority for the government. The caliphate cabinet includes a senior-level "Private Secretary" for jihad. The "Military Department" – which appears to be a cabinet-level agency –would be headed by a "Field Marshall," who appoints a "Director of Jihad," his second in command. Included within the Treasury department would be something called a "Department of Jihad."

The Treasury would be divided into two divisions: one handling revenue, which includes a "War booties Agency," and the other covering expenditures, which includes both a "Dept. of Jihad" and a "Director of Jihad Office" on its organizational chart. 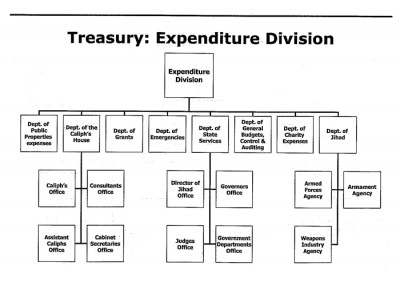 Articles 51 through 55 of the draft constitution would establish an "Amir (military leader) of Jihad" who would supervise holy war-related activities in government agencies.

The group believes that this year's revolutions in Egypt, Tunisia, Libya, Yemen, Syria and other states offer Muslims an opportunity to throw off the shackles of Western colonialism.

"No longer are the Muslims afraid of these regimes who have oppressed the masses," reads a flyer for the conference that appears on the HT website. "Will the Muslim world rid itself of Western colonial interference? Will these events lead to the application of Islam and the re-establishment of the Khilafah (caliphate) State?"

Arab rulers are pretending to be legitimate leaders just as Soviet Communist Party leaders used to do, Imam told the conference.

For the West, the "front line" in the struggle against Islam is ensuring that the "tyrants" in the Muslim world remain in power, Imam said. Speakers cited Syrian dictator Bashar Assad. Libya's Muammar Gaddafi, Palestinian Authority President Mahmoud Abbas, and Pakistan Army Chief of Staff Ashfaq Parvez Kayani as examples of Muslim leaders who must be replaced.

The Pakistani Army announced last month that it arrested Brigadier Ali Khan and four majors in an investigation of Hizb ut-Tahrir's infiltration of the military there. Khan, assigned to Army General Headquarters in Rawalpindi, is the most senior Pakistani military officer known to have been arrested for alleged involvement with radical groups since 9/11.

While Hizb ut-Tahrir has struggled to win followers in the United States, its name has come up in connection with several recent terror-related arrests.

Farooque Ahmed, 34, was arrested last October and charged with plotting to blow up Washington, D.C. metro stops and a D.C. hotel frequented by members of the military. Authorities found Hizb ut-Tahrir literature when they searched Ahmed's suburban Virginia home. In April, he pled guilty to terror-related charges and was sentenced to 23 years in prison.

Antonio Martinez, a 21-year-old Muslim convert who also goes by the name of Muhammad Hussain, was arrested in December and charged with plotting to blow up an Army recruiting center near Baltimore. He reportedly followed the teachings of Omar Bakri Muhammad, a Muslim Brotherhood member who founded HT in England.

At Hizb ut-Tahrir America's June 26 conference, speakers attacked President Obama as an enemy of Muslims. "Obama visits the Middle East and our [Muslim] public rulers rush to shake his bloody hands. They send up their armies to dance for him," one speaker said. "They roll out red carpets to welcome the butcher of Iraq."

Under the caliphate, Muslims would not be forced to live "under what 'Sheikh Obama' or Assad or Erdogan believed" but under the rule of Islam, a speaker identified as Abu Atallah declared.

Middle Eastern leaders "and their masters in the West" have been "shaken to the core," said Reza Imam, who pointed to statements by former President George W. Bush and Donald Rumsfeld warning of the dangers posed by the establishment of a caliphate.

"They see their hard work being undone," he said. "It's like a dreaded, fearful occurrence for them – that Muslims want to unite and live under Islam."

"It's criminal to them," Imam continued. "And this is why their thrones are shaken. They're terrorized by this – simply that Muslims want to obey Allah."

HT seeks to re-establish the caliphate that had existed during the Ottoman Empire, abolished by Turkish leader Kemal Ataturk in 1924. Once it is in place, "our problems would disappear and the forces of Satan would be pushed back," Abu Atallah said. Once the caliphate is established, the Al-Aqsa Mosque in Jerusalem "would be taken back from the Crusaders (Israel)," Atallah said. Asked whether Sunni/Shiite animosity would be an obstacle to establishing a caliphate, another speaker dismissed the intra-Muslim rivalry dating back more than 13 centuries as "something the West has instilled in us."

Audience members responded enthusiastically to the attacks on the United States and quoted writings from columnist Patrick Buchanan portraying Islam as ascendant and the West in decline, interrupting speakers time and again with shouts of "Takbir" and "Allahu Akbar." The speakers responded by joining the chants themselves.

Because of today's revolutions in the Arab world, the West "is trembling with fear – as it should be," one speaker said. "Bullets were no match for the ummah's (Muslim nation's) power."

How powerless we in the West have become all because of our freedom and liberties that include giving venues and safety to even these vile attacks from organizations that are planning our downfall. How ironic !!

Under the US laws Sedition is classified as attempting to destabilize the US govt. However, Hizb ut Tahrir's short term goals (i.e., establishing the Caliphate) do not trigger US sedition laws because they only want a Caliphate in the MUSLIM WORLD not in the US. However, the long term goal of HIzb ut Tahrir, Islamic groups and the Caliphate itself is to spread it's rule by force to convey the Islamic Call and make Allah's word uppermost.

In the words of Muhammad: "I have been ordained to fight people until they say: "La ilaha illallah"."

And in the Qur'an: "Fight them until there is no more fitnah (War against Islam, as well as non-Islam [agreed upon by the scholars of Islamic Tafsir]) and all religion reigns for Allah." (8:39)

Thank you for the article. The time is coming that a major confrontation is about to happen.

If they are public and open with their goals....would that be considered sedition?