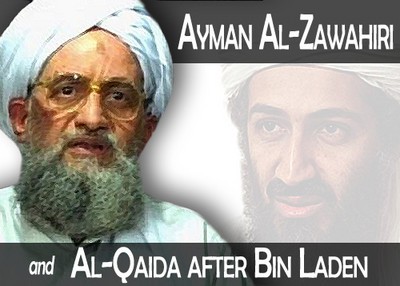 Al-Qaida has announced that Ayman al-Zawahiri, the former No. 2 of the organization, is the new permanent head of the organization. The announcement also functioned as the mission statement for his new leadership, affirming key al-Qaida plans and emphasizing some previously neglected points.

"[T]he best of fulfillment for the pious martyrs… and of Shaykh Mujahid Usama bin Laden… would be to continue on the path of Jihad for the cause of Allah," the group said in a statement posted to the Ansar al-Mujahideen, and translated by the NEFA Foundation. "The General Command for Qaidat al-Jihad Group—after finishing the discussion—announces that Shaykh Dr. Abu Muhammad Ayman al-Zawahiri is undertaking of responsibility of Amir of the group."

As quickly as al-Qaida announced its new leader, the chairman of Joint Chiefs of Staff pledged he will meet the same fate as bin Laden. "There is not a surprise from my perspective that he's moved into that position," Admiral Mike Mullen told journalists. "He and his organization are still threatening us, and as we did both seek to capture and kill -- and succeed in killing -- bin Laden, we certainly will do the same thing with Zawahiri."

Al-Qaida's statement, meanwhile, added a seven-point reaffirmation of its mission, including the liberation of all of Palestine and supporting al-Qaida affiliates.

"[We will carry] Jihad against them with all of our power and encourage the Ummah [Muslim nation]to wage Jihad on them with the hand, the tongue, the heavens, money and deeds and everything possible, in order for all the invasive armies leave the land of Islam and so the Sharia of Allah can prevail on it," the group said.

However al-Qaida's list of affiliated battlefronts contained some interesting omissions and inclusions.

The group pledged that its primary efforts would not end with Iraq and Afghanistan, but that it would bring Sharia law back to Somalia, the Arabian Peninsula, North Africa, and Chechnya. Although al-Shabaab in Somalia and southern Russia's Islamic Emirate of Chechnya are fully independent groups, al-Qaida's inclusion of them shows a broadening of the group's circle of branches.

Missing were references to branches in Southeast Asia, including rebels fighting in the southern Philippines and Indonesia, which U.S. intelligence considers key parts of the central group.

Al-Qaida also declared that its mission would not stop until injustice - which the group interprets as the rule of man-made law - would be removed from all countries. This goal extends even to non-Muslim nations that the group says are victims of the West.

"Our Islamic religion forbade all injustice, against the Muslim or others, with the enemy or the friend," it said. "Our Jihad against the American arrogance is ultimately to remove injustice from them, and it is an efficient effort to rid them from the Western American exploitation that has enslaved them, stole their wealth, and corrupted their environment and lives."

The call for Sharia included an extension of its support for Islamist organizations that are pro-Jihad, but not necessarily fighting. "We offer our hands and open our hearts to cooperate with everyone working on supporting Islam in the Islamic groups and organizations and outside of them… to support the Sharia so the Islamic homelands could be ruling not ruled, leading not led, and commanding not commanded, and until every constitution and law that oppose it are invalidated," the statement said.

The group also reaffirmed key theological perspectives on Islam, particularly the individual duty of jihad. "With the help and grace of Allah, we aspire to call [do Dawa] for the true religion, and encourage our Ummah to prepare and fight, along with our practical enacting of the individual duty of Jihad against the invading disbelievers," it added.

However, the statement did not go as far as al-Qaida leader Anwar al-Awlaki's November 2010 call to kill Americans anywhere they were, without permission from a sheikh of jihad. "Fighting the devil does not need a fatwa (religious edict) or consultation - they are the devil's party," al-Awlaki said at the time, in an effort to incite lone wolf attacks. This assertion went beyond Osama bin Laden's 1996 "Declaration of Jihad Against the Americans Occupying the Land of the Two Holiest Sites," which primarily targeted Americans because of their military bases on Saudi soil.

The new statement calls imprisoned jihadists who are imprisoned "lions in the chains who have to be patient," but the organization pledged not to forget them. At the top of its list was the "Mujahid Shaykh" Omar Abdul Rahman, the "Blind Sheikh" serving a life sentence for his role in the first World Trade Center bombing in February 1993. It also mentioned its remembrance of "our brothers in Guantanamo and Baghram and Abu Ghraib, and America's secret and known prisons and in every 'Guantanamo' the agents of America established under her supervision in the Muslim homelands."

In its latest statement, Al-Qaida also reaffirmed its support for the Arab revolutions, an issue that the group has endorsed before in statements from the al-Qaida-affiliated al-Fajr Media Center. The group called for the revolutions to continue until all semblance of Western civilization had been ejected and replaced by Sharia law. Analysts see such statements as a hollow attempt to capitalize on the generally peaceful and spontaneous uprisings that are viewed as a rejection of al-Qaida's murderous ambitions.

"Change will not be achieved," the statement said, "except with the Ummah's disposal of all kinds of occupation, domination, and military, economic, cultural and judicial control the West enforces on us."