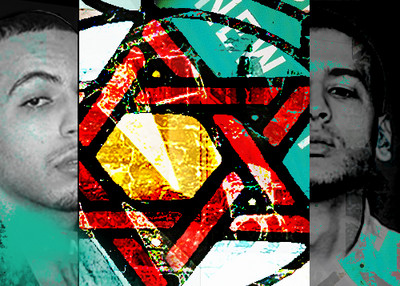 New York police have arrested two men intent on attacking a Manhattan synagogue after one bought a hand grenade, semi-automatic handguns and bullets from undercover officers.

Ferhani bought the weapons from undercover NYPD officers Wednesday evening and was arrested immediately. Mamdouh was picked up nearby.

The suspects were recorded by an undercover NYPD detective discussing their hatred of Jews and desire to kill them. Ferhani said he was "fed up with the way Muslims are being treated around the world," Kelly told reporters Thursday afternoon. "They're treating us like dogs," Ferhani said.

Talk of targeting a synagogue started last month, wrote Detective Steve Pinkall in an affidavit. "Mamdouh also discussed training, and also the importance of paying for things in cash rather than credit cards so they wouldn't get caught like 'this dickhead got caught, the one that put the car in Times Square,'" the affidavit said.

Faisal Shahzad was arrested while on board an airplane trying to flee the country after investigators traced his identity through his vehicle and searching his home.

Ferhani even discussed disguising himself as a Jewish worshipper in order to get inside a synagogue to plant a bomb.

Before his arrest, Ferhani asked about buying a box of grenades and a bullet proof vest.

The case is unusual because it is being prosecuted by the Manhattan District Attorney's office rather than federal prosecutors. New York does have its own anti-terror statutes, but previous cases of this nature were handled in U.S. District Court. For example, Mayor Michael Bloomberg invoked a 2004 plot to bomb targets in the city's Herald Square around the time of the Republican National Convention.

The suspects were arrested and charged in federal court after meeting an informant in hopes of buying weapons.

In this case, no specific synagogue was named and the affidavit makes no reference to any effort to scout targets. The arrests were made Wednesday, Kelly said, because officials were concerned by the suspects' stated desire for more explosives and out of concern that they might elude police surveillance.

New York media outlets report that the FBI passed on the case because it was "aspirational" more than operational.

But, in many ways, the circumstances conform with a series of sting operations the FBI waged against would-be terrorists in the past year. Among them, the November arrest of a man who thought he was setting off a bomb during a Christmas tree lighting ceremony in Portland. FBI agents learned about Mohamed Osman Mohamud when he inquired about contacts who could help him go to Pakistan to wage violent jihad.

Similarly, a Northern Virginia man was arrested in September after scouting subway stations in and around Washington, D.C. for possible al-Qaida attacks. It turned out he was dealing with undercover FBI agents the whole time. Farooque Ahmed pleaded guilty last month to two counts of trying to provide material support to al-Qaida.

Earlier this week, a radicalized convert to Islam pleaded guilty to plotting to blow up a federal building in Springfield, Ill. Michael Finton thought he was detonating a truck bomb in September 2009 when agents arrested him.

A federal judge earlier this month upheld the convictions of four men in a separate synagogue bombing plot. But in doing so, U.S. District Judge Colleen McMahon wrote that an FBI informant came close to entrapping the men. Defense requests to overturn the verdicts were denied, however, because prosecutors still could prove the defendants "were predisposed to commit violent terrorist acts against Jews and American government facilities" before the informant entered the picture.

Cry as they Kill

Why is it that Muslim terrorists always play the "woe is me" card? They act like the victim while they victimize. They make anti-Semitic slurs and spew hatred and say that they are hated. When are we going to actually stop these creatures? I don't hate Muslims--my wife was one and left--she could be killed for that. I do not like Islam. There is nothing about it that makes it likeable if you understand it. Mohammad was not a good man. He was evil and he killed once he had power. He taught and practiced lying to benefit his sick cause. He was probably schizophrenic or suffered from temporal lobe epilepsy--but that doesn't excuse him for the terrible things he has done.