No Holds Barred at Islamist Confab 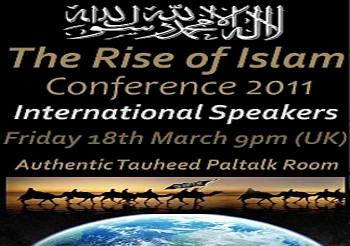 A global assortment of radical Islamists held an online conference last weekend, calling for the destruction of the West and the violent implementation of Islamic law.

It isn't clear how many people tuned in to the Rise of Islam Conference 2011, but many of the speakers are considered fringe elements, even among Islamists. They represented English-speaking Islamist groups from all over the world. Jamaican Islamist Abdullah al-Faisal and British leaders Abu Izzadeen and Anjem Choudary hammered home their views about why and how Islam will dominate the world. But American Abdullah Younus Muhammad, currently living in Morocco, took the spotlight with his open endorsement of al-Qaida's war on the West.

"O Muslims, there is no honor, there is no dignity, there is no victory, unless Islam is a complete system established," said Muhammad, of islampolicy.com. "We do not believe in mass protest movements. We do not believe in each one teach one as the way forward. We believe that when a sufficient amount of Muslims have might to take all the powers that be, they go out and march forth in the way of Allah."

He cited Osama bin Laden's 1996 "Declaration of War against the Americans Occupying the Land of the Two Holy Places" in calling on Muslims in the West to do more.

America considered the defeat of the Soviet army in Afghanistan and the fall of communism to be "a victory over the entire world" and a victory for liberal democracy, Muhammad said. "And it is this system that they continue to try to perpetuate, and to try to force down the throats of people all over the world, that is the true enemy, that is the true empire that Islam is waging a war against today."

In bin Laden's 1996 declaration, he called for a combination of "operations" with political and economic moves, Muhammad said, describing how American Islamists could aid al-Qaida's cause. They should "pay more attention, give more effort to propagation, spend more time promoting and defending the message of the mujahideen wherever they may be … Publish their words; don't just call yourself jihadi and say 'I am allying with them,' speak as if you are speaking on their behalf."

In practical terms he advised that Muslims boycott American goods to open an economic front to coincide with al-Qaida's military front. "If the economic boycott is coupled with the mujahideen's strikes, then the enemy's defeat is imminent, Insha'allah [if Allah wills]. And vice versa, if the Muslims do not cooperate with and support their mujahideen brothers by severing economic deals with the U.S. enemy, then they are paying him money which is the foundation of wars and armies, hence promoting the war and the Muslim suffering from it."

Other speeches, although militant in their own right, paled in comparison.

Abdullah el-Faisal, a Jamaican Islamist militant who has been deported from Kenya and Britain, explained why Islam is destined to dominate the world. "If communism is dead in the grave, what makes you think capitalism will survive? What makes you think capitalism will survive? It can't survive. Allah says … Truth has come and falsehood has vanished, and falsehood is by nature a vanishing thing."

Abu Izzadeen, a British Islamist who once called bin Laden "the only true leader of Muslims" and was convicted of terrorist financing charges, talked about shaking British society through Muslim pressure.

Anjem Choudary, a leading British Islamist who tried to spark a new American movement called "Shariah4America," reinforced the idea of bringing Islamic law to America and the West. "That Rasul Allah [the messenger of Allah] said, that before the Day of Judgment, Islam will enter every single household, whether with dignity or whether humiliation, dignity because they will embrace Islam, and humiliation because they will be Kuffar [non-believers] but they will be under the Sharia."

Supporters of freedom and democracy, he said, ultimately are doomed because of God's will. "The messenger Muhammad (saws) came with the guidance and the Haq [truth], the Deen [religion] of truth, for it to be dominant on all other ways of life, no matter how much the polytheists, the disbelievers, those Kuffar, dislike it or hate it. Our objective, therefore, is the domination of the world by Islam."

We Too Had A Conference

O dreamers of western conquest, you are fools to those who exploit and use you as they wish. Like your political and religious leaders, the time will come when you will cower before them and they before us.

You will soon learn that the ways which you have been accustomed to, will soon be a thing of the past.

We too have a plan, and it doesn' t include the lie you are hopelessly clinging to, as a means to destroy western society. You will remain as you are, exploited fools.

I am human that believes in Human Rights... to protect and support one another as we traverse this planetary divide. There's a whole lot of work yet to be done... I'm not looking for Utopia but not looking for Dystopia either. I know there are a whack of greedy SOB's running the world and a bunch of angry SOB's who want to show them the dark of night. Unfortunately - there are more folks caught in the crossfire: folks losing their jobs and homes while top management increase their bonuses in the process; men, women and children of every culture and faith descimated because others are hell bent on their ideology no matter how much blood runs in the street. Tens of thousands of men, women and children raped and pillaged of their intrinsic birthright and chained into slavery around the world including western civilization.

Only Muslims of the world can bring their religion into the 21st C. I know many of them are adamantly opposed to this group of jihadist terrorists who have hijacked the so-called religion of peace. I know many of them feel oppressed by the infrastructure of a faith that lacks dialogue yet they are true followers of their prophet. They need to rise up and throw out the dirty water that regurgitates filth and spreads disease.

I have no doubt Islamic extremism will get worse before it gets thrown into the abyss forever.

The definition of insanity? Doing the same thing over and over again and expecting different results. (Einstein)

Radical Islam will demand Radical methods to irradicate it. The world needs to change what it is doing or the insanity will spin out of control.