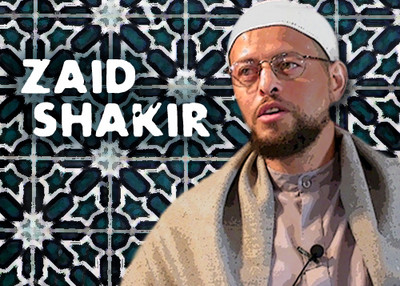 He is a popular speaker at Islamist gatherings and hailed in the New York Times as being among a group of "leading intellectual lights for a new generation of American Muslims looking for homegrown leaders who can help them learn how to live their faith without succumbing to American materialism or Islamic extremism."

But Zaid Shakir's speeches and writings show that he believes America poses the greatest threat to global security and that his country has a brutal and genocidal legacy that informs its current policies. The Investigative Project on Terrorism shows Shakir's repeated condemnation of American history and tactics in the war on terror in a new report.

He is cagey about his views of the 9/11 attacks, stopping short of calling it an inside job, but recommending an author who makes that very argument.

"This article will not examine what actually happened on 9/11," he wrote in 2007, "although the glaring weaknesses and inconsistencies in the official narrative call for such an examination. For those seeking greater clarity concerning the events of that day see David Ray Griffin, Debunking 9/11 Debunking."

Griffin questions whether Islamist terrorists ultimately were responsible for the attacks. The Bush administration had advanced knowledge of the attacks and the collapse of the Twin Towers was most likely caused by explosives placed throughout the towers, Griffin claims.

Shakir is much clearer articulating his opinion of America's response to the attacks. "9/11 has been used by both the government and a significant segment of the Christian Right in this country, along with their allies, to launch a war on Islam," he wrote in an article republished by a website that questions the official account of 9/11. That war on Islam extends to the faith itself, "its beliefs, its Prophet, peace be upon him, and its people."

Shakir, 54, was born Ricky Mitchell and converted to Islam in 1977 while serving in the U.S. Air Force. He is among the founders of Zaytuna College in Berkeley, Calif., which seeks to become "America's first accredited Muslim institution of higher learning." The college seeks "to restore broad-based and pluralistic scholarship to its proper place as a central priority of Muslims."

On other issues related to terrorism, Shakir can be idealistic and naïve. While terrorist groups from al-Qaida to Hamas justify their violence in religious terms, Shakir believes no Muslim can be a terrorist. There's a difference between terrorism, which he said he opposes, and jihad, which he described in a 2001 speech at the Zaytuna Institute as "fighting the combatant forces of the enemies of Islam."

Some Muslims, for example, claim to be hijacking airplanes as part of a jihad. But Islam "doesn't permit us to hijack airplanes that are filled with civilian people, noncombatant people," Shakir said in the same speech. "If you hijacked a plane filled with the 82nd Airborne, that's something else."

The November 2009 Fort Hood massacre in which 12 soldiers and a civilian were killed seemed to fit that into the latter category. Anwar al-Awlaki, the radical cleric who served as an inspiration to Nidal Malik Hasan, said the Army psychiatrist opened fire because he "could not bear living the contradiction of being a Muslim and serving in an army that is fighting against his own people."

In this case, however, Shakir expressed "my deepest condolences to the families of the dead and wounded" and said there was "no legitimate reason for their deaths." It was not, he wrote, related to Hasan's radical Islamist beliefs.

"One of the great tragedies in this situation is to view the crime Major Hasan is being accused of as a specifically Muslim problem." He praised military and political leaders for making similar claims. Even so, Shakir wrote the he believes "that the U.S. war machine is the single greatest threat to world peace."

Worse than the attack was America's anticipated response, he wrote. "Little do those Muslims realize that they are encouraging elements that would bomb Afghan towns and villages with the same insane impunity that was visited on places like Tokyo, Dresden, Hamburg [and] Berlin during World War II."

Similarly, last year's failed car-bombing in Times Square was not an act of jihad, Shakir wrote in a column five days later. Instead, it was "a mirror image of the godless murderous mayhem and carnage this country has inflicted on the innocent civilians of many Muslim countries."

After pleading guilty to the bombing attempt, Faisal Shahzad told the court that "It's a war. I am part of the answer to the US terrorizing the Muslim nations and the Muslim people."

Evil and oppression carried out by the United States could lead to divine retribution, Shakir told a 2004 audience at the "Reviving the Islamic Spirit" conference in Toronto.

Whatever you think, this man is an Air Force veteran who was highly patriotic and willing to make the ultimate sacrifice for his country. This means something to me as I'm having family who are not coming home.

Yet A R Thomson above sez "go back to your Arab Country". What arrogance! He is an American for Christ sake. I just wonder if A R Thomson is a veteran.

Muslims are facing the worlds worst genocide since the Jews faced during Hitler's BBQ. I'm speaking up now as I don't want to feel what Germans felt after WW2.

Just Another Lib-Tard In A Halloween Costume

I knew Ricky when he was in the Air Force. He was one of those guys that just didn't fit in but behaved in such a way that he demanded your attention and acknowledgement in a manner he could deny later. It was all about being obtuse.

In his new life as a Muslim, he hooked up with other dysfunctionals who, for the first times in their pathetic existences, were able to create their own social group for self-validation. It had little to do with any real devotion to Islam but, like so many other "American Muslims" provided the means for the acknowledgement and gratification they all sought, but failed to muster in the real world.

So when you listen to him today (if you have any such inclination), keep in mind that his "devotion" is based soley on his attempt to strike back at a society that rejected him because he simply didn't fit in.

That bolsters my gut feeing that these people who claim to be devout muslims simply have a bad case of penis envy when it comes to anyone in any country that enjoys the fruits of their labor. And their philosophy is basically, "If you've got something I don't have, It's easier for me to destroy what you have rather than to buckle down and work hard so I too can enjoy a better life.

Pathetic.. but not as pathetic as a country whose main-stream media jumps on board with an article to help him spread his disease..

The very fact that he condemns the Forces that protect you, and questions (9/11) give rise to questions unanswered.?.

What ever his Muslim beliefs are, he not wanted in the UK or the USA.

So go back to your Arab Country's,Iran would be a good place to start.