The Administration's Misguided Outreach to MPAC 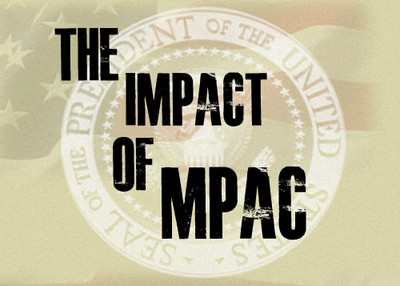 Although the Obama administration came into office promising change, it has continued the misguided Bush administration policies of working with radical Islamist organizations. Exhibit A in the continuation of this failed policy is outreach to the Muslim Public Affairs Council (MPAC), whom administration officials have met with at least two dozen times since taking office.

We have previously detailed how MPAC:

"[R]outinely speaks in defense of designated terrorist organizations, as well as individuals and charities that are supporters of terrorism; opposes U.S. counterterrorism measures as part of a consistent knee-jerk reaction claiming bias and discrimination behind law enforcement efforts; and reflects a blatant and conspiratorial anti-Semitism."

Despite this well-documented past, members of the Obama administration continue to validate the organization as a bridge to the American-Muslim community.

MPAC and its leadership have consistently claimed to be an organization dedicated to tolerance and peaceful dialogue. To that end, Executive Director Salam al-Marayati traveled to Europe at the invitation of the State Department to speak about "religious freedom and free speech," which he called "opposite sides of the same coin of human rights." Despite the veneer of caring about human rights, MPAC has repeatedly used its soap box to spew anti-Israeli and anti-American rhetoric.

MPAC has, for over a decade, been anathema to "religious freedom." Demonstrative of this is an interview conducted on KPCC "AirTalk" Radio in August of 2006, in which al-Marayati argued:

"We're against Holocaust denial, but we're also against people who exploit that as a way of shoving this kind of war propaganda and dehumanization of the Arab peoples and the Muslim peoples as if they have to pay the price for what Nazi Germany did to the Jews back in the 20th Century."

The true nature of the organization most recently revealed itself at an MPAC-sponsored rally in New York City. At a March 27, 2009 protest to Defend al-Aqsa Mosque and al-Quds, participants repeated pro-Hamas chants:

That chant, from the river to the sea, is subtle. But the message is clear – a Palestine extending from the Jordan River to the Mediterranean Sea erases the state of Israel.

While one could write off these statements as simply pro-Palestinian rhetoric, the leadership of the organization has gone so far as to demonize Israel as a perpetrator of war crimes. In an April 2009 newsletter released by the Western New York chapter of MPAC, the President of the organization, Khalid J. Qazi, wrote:

"[O]ne has to ask the question as to how and why the World can stand by while the State of Israel is subjecting Palestinians to a Holocaust in their own home land."

At the organization's 9th Annual Convention on December 5, 2009, Laila al-Marayati, in an attempt to minimize Hamas violence, stated:

"[W]e need to stop talking about Israelis and Palestinians as if they are equals because they are not. We know that. And that rings hollow every time when you talk about they're partners and bringing people, because the Palestinians still are under occupation."

Not satisfied with blaming Israel, MPAC has frequently criticized the United States for its support of the Jewish state. In an August 2001 article entitled Accomplice in Crimes, former MPAC Vice Chairman Aslam Abdullah said that Americans shared responsibility for Palestinian suffering:

"[The United States] is a partner in the killing of people in Palestine. Our administration is responsible for giving the apartheid state a free hand in murdering people and our Congress is supportive of the criminal deeds of the racist state. Our congressmen are accomplice in heinous acts committed in the name of religion and race. The world's only superpower in coordination with the Zionist State of Israel is presiding over the ethnic cleansing of the powerless, resource less, and unarmed Palestinians."

Yet, MPAC continues to be invited to government functions. Most recently, on March 10, 2010, Harris Tarin, MPAC-DC Director, attended a briefing held by the Deputy Assistant Secretary of State for International Organizations, Suzanne Nossel where they discussed U.S. engagement policy with the international community.

What Perez failed to mention is the role that MPAC has played in sowing this distrust. MPAC has taken aim at all U.S. counter-terrorism policies, painting them as part of a broad-based war on Islam. As al-Marayati argued in a 2000 article titled Defining Terrorism for America: Jewish and Muslim Cases and their Readings by the American Public, U.S. policies encourage:

"double standards in opinion—and policymaking vis-à-vis counterterrorism; it also exacerbates tensions in interfaith relations…biases the Middle East peace process, and intensifies the clash of civilizations between Islam and the West."

More recently, al-Marayati continued the trend of claiming that all U.S. counter-terrorism policies are representative of a broader "war on Islam." In an April 2009 editorial in al Watan al Arabi, al-Marayati was quoted as saying:

"There is Islamophobia in the American government too, and this is a problem, since there are people in it spreading fear of Islam and distributing misleading generalizations against American Islamic organizations"

A prime target of MPAC has been the FBI's use of informants and undercover officers. In a February 2009 press release titled "FBI losing Partnership with American Muslim Community," MPAC argued:

"Federal law enforcement cannot establish trust with American Muslim communities through meetings and town hall forums, while at the same time sending paid informants who instigate violent rhetoric in mosques. This mere act stigmatizes American mosques and casts a shadow of doubt and distrust between American Muslims and their neighbors."

Even more incendiary has been the group's double-speak on cooperation with law enforcement. While publicly calling upon its members to remain vigilant and assist U.S. law enforcement officials, that message is undercut by the group's casting informants as agents provocateurs. At a July 2005 conference in Dallas sponsored by the Islamic Society of North America, al-Marayati told the audience that Muslims should not become informants for the federal government:

"[W]e reject any efforts, notion, suggestion that Muslim should start spying on one another. In fact if you look at the Lodi case, the disaster of Lodi is that Muslims were reporting each other to the authorities saying, 'Oh, this person is an extremist' and the other camp saying the same things so both of them got in trouble. Se we are, this is the model not to follow."

And despite these attempts to undermine relations with U.S. law enforcement, MPAC leadership continues to meet with officials from the Obama Administration, including Secretary of Homeland Security Janet Napolitano, Attorney General Eric Holder, and Assistant Director in Charge of the FBI, Steven M. Martinez.

Continuing to work with MPAC is a mistake and the Obama administration must change course immediately. To continue this failed policy of the Bush administration would run counter to efforts at combating terrorism both at home and abroad.

Media It is used so extensively for misinformation and disinformation:ordinary citizens Are confused at best Most people are busy and don't have time like some of us to read extensively I feel the outcome very soon is going to be bad They want war:pushed by iran And now turkey: This is crucial Nato member attacking nato member via stealth flotilla nonsense Kurdestan ? Iran has to do something :to perpetuate own power and while obama /pelosi/brennan are in usa power politics Next pres will be diff :islam watches and knows this:they destroyed bush in media Disgrace on america I truly expect war this year in persian gulf This pressure cannot continue indefinitely without persian gulf/oil. Becoming main focus as this is irans trump card:and goal They would lose "face" in islamic world if don't try ...