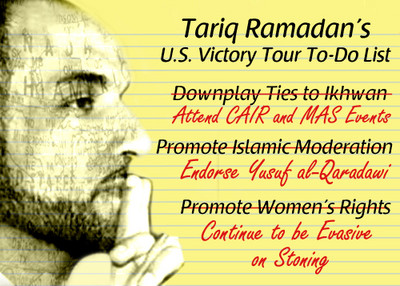 They waited six years for a chance to hear him in person on American soil. Now that they have, many are walking away frustrated from their encounters with Tariq Ramadan, the grandson of Muslim Brotherhood founder Hassan al-Banna.

Ramadan arrived in the U.S. last week and has been speaking in public forums and private fundraisers throughout the country. He was preparing to take a faculty position at Notre Dame University in 2004, when his visa was revoked. U.S. officials cited contributions he had made to an organization that supported the terrorist organization Hamas, a Brotherhood-affiliated group.

Secretary of State Hillary Clinton dropped the ban on Ramadan's entry in January following a court order that would have required that the government prove he knew the charity had Hamas ties when he made his contributions. Allies in the American Civil Liberties Union and in academic circles eagerly awaited the visit that would result.

"Garden-variety European leftism," wrote the New Yorker's George Packer. On CNN, Christiane Amanpour could not get him to "condemn out of hand stoning of women for whatever reason."

The feedback seems to strengthen the hand of Ramadan's critics, who say the Oxford University professor of Islamic studies is polished, but that his claims of moderation are a façade hiding a radical agenda.

"He's been this poster boy for Islamists," Hudson Institute scholar Zeyno Baran told the Investigative Project on Terrorism. Yet "his word choices are so clever that it's difficult to see where he is coming from."

Ramadan "engages in double speak," said Salim Mansur, a professor at the University of Western Ontario and newspaper columnist who has emerged as one of Ramadan's sharpest Muslim critics.

When Ramadan talks to liberal intellectuals, he "quotes Voltaire and says he shouldn't be equated with his grandfather [Al-Banna]," says Mansur. "When he goes to Muslims, he mentions that he is the grandson of Al-Banna and that he is working with Sheik [Yusuf]al- Qaradawi, and any differences between them are 'stylistic.'"

Al-Qaradawi is an influential spiritual guide for the Muslim Brotherhood.

Ramadan has called for "suspending" stoning (the penalty for adultery in many Muslim states) rather than abolishing it. "What does a 'suspension' mean? What about 'moratorium?'" Baran asked. "Why not just end stoning in the 21st century?"

To do so would require Ramadan to go against Sharia law, she said. He isn't willing to do that, so he opts for talk of suspending such practices and achieving a Muslim "consensus" before changing the law.

Judging from some of his initial appearances in the United States, this approach may be catching up with Ramadan. In a speech at Cooper Union in New York City, he seemed poorly prepared and provided analysis that prompted Packer's "garden-variety European leftism" critique. Packer, a journalist who had written sympathetically of Ramadan and regarded him as a moderate, shared the panel with Ramadan and tried to question him.

On CNN, Ramadan sounded evasive as Amanpour peppered him with questions about the mistreatment of women in Islamic states and questioned his claim to be a Muslim reformer.

"Many people, describe you as 'an Islamist in sheep's clothing,'" she told Ramadan, because he fails to take absolute positions against things like the stoning of women.

Amanpour asked about a 2003 debate with then-French Interior Minister Nicolas Sarkozy, in which Ramadan called for a stoning moratorium while Islamic scholars tried to reach a consensus on the issue.

"And Mr. Sarkozy was furious. He said, 'What do you mean a moratorium? Don't you condemn it out of hand? What are you saying - that we just stop it a little bit, discuss it, and then continue it?' "

Why not condemn out of hand stoning of women for any reason? Amanpour asked.

Ramadan accused Amanpour of incorrectly translating his remarks. He then confirmed the substance of her question, saying it was pointless to condemn such practices while the American and French governments are dealing with Muslim "petro-monarchies" like Saudi Arabia.

Ramadan said his position is "let us first go for a moratorium, to stop it right now and then to have a discussion. What is wrong with this?"

He was defensive when asked about his failure to condemn a cleric who had rationalized the use of female suicide bombers, suggesting that he opposed suicide bombings while embracing the goals of the organizations that use them: "My position on this is, the Palestinian resistance or the Iraqi resistance is legitimate. The means should be ethical. You cannot target innocent people. You cannot target civilians. I was always clear."

Amanpour asked Ramadan about his grandfather, Muslim Brotherhood founder al-Banna, and his association with "extremism" and a very strict version of Sharia. Conditions had changed since the 1930s and 1940s, Ramadan said, and he wants to be judged on the basis of his own work – not the actions of his ancestor.

Ramadan has denied any connection with the Muslim Brotherhood. In an interview with New York magazine last week, Ramadan tried to distance himself from the Brotherhood, saying it split in 1949 and "became something completely different. I disagree with what it has become."

Ramadan's efforts are complicated, however, by his U.S. itinerary, which includes numerous speeches before organizations linked to the Muslim Brotherhood.

On Saturday, Ramadan was keynote speaker at a Council on American-Islamic Relations (CAIR) banquet in Chicago. Exhibits in the terror-support prosecution of the Holy Land Foundation for Relief and Development show CAIR was an extension of a Hamas-support network in the U.S. CAIR's Hamas ties appear to be the subject of a federal grand jury investigation.

On Monday, he addressed the Prince Alwaleed Bin-Talal Center on Muslim-Christian Understanding at Georgetown University in Washington, a Saudi-backed charity headed by John Esposito, a longstanding apologist for CAIR and other Islamist groups.

Later on Monday, Ramadan was hosted at a Capitol Hill reception by MAS Freedom, an organization affiliated with the Muslim American Society, another Brotherhood-affiliated group. MAS Freedom Executive Director Mahdi Bray invited Ramadan to be keynote speaker at MAS Freedom's "Standing for Justice" banquet in Boston May 16.

During his Cooper Union appearance - where he spoke before an overwhelmingly supportive audience - Ramadan was on a panel with Dalia Mogahed of the Gallup Center for Muslim Studies, Joan Wallach Scott of Princeton's Institute for Advanced Study, and George Packer of the New Yorker. The moderator was Jacob Weisberg of Slate magazine.

Ramadan opened by congratulating the United States for letting him in, criticizing American foreign policy and urging Muslims to stop worrying about integrating in the West and focus instead on contributing to their new homes.

"Ramadan seemed wrong-footed in those opening remarks. He didn't have a sense of where he was, of his American audience. It was as if he were speaking to disaffected young second-generation immigrants in a working-class mosque…which is how he spends much of his time. Multiple identities, the value of diversity – not exactly news in this city, in this country. Many of his sentences amounted to buzz words strung together, without reaching a point. It seemed a missed opportunity; his first address in America since becoming an international figure, and he hadn't prepared, hadn't thought it through."

Ramadan appeared "much sharper" when the panel and the audience joined the discussion, Packer wrote. Listening to Ramadan for an hour and a half, Packer concluded that Ramadan "is not a philosopher, or an original thinker. He has been cast in that role by recent historical crises and his own ambition – the role of someone whom large numbers of people turn to for insight on a vast range of issues." But what Ramadan has to say about most subjects is "garden variety European leftism."

Packer expressed surprise that none of the speakers who proceeded him at an event sponsored by groups such as the American Civil Liberties Union had said anything about the threats to freedom of speech and expression "in countries where Muslims constitute the majority, or where some Muslims who are in the minority refuse to accept it."

So, the New Yorker correspondent asked Ramadan two questions. One, drawing from a chapter in Paul Berman's forthcoming book, The Flight of the Intellectuals, described the relationship between Ramadan's grandfather, MB founder Al-Banna, and Haj Amin al-Husseini, the Mufti of Jerusalem who was "a Nazi ally who made a series of genocidal broadcasts on an Arab radio program transmitted from wartime Berlin, urging Arabs to rise up and kill Jews."

Ramadan flatly denied his grandfather had ever supported Hitler and said it was necessary to understand the "context" in which the Muslim Brotherhood boss collaborated with the Mufti. According to Ramadan, Al-Banna joined the Mufti because of shared opposition to the creation of Israel, and not because of support for Nazism.

Packer's second question dealt with whether Ramadan believed that rights are inherent in human beings or must be granted by the authority of religious texts. "By the end of the evening, I knew the answer. Ramadan is building a worthy bridge on a rotten foundation," Packer wrote.

Salim Mansur questioned Cooper Union's decision to play host to Ramadan. He noted that in February 1860, Abraham Lincoln delivered an historic address there outlining the case against expanding slavery to America's Western territories. Inviting a pro-Muslim Brotherhood ideologue like Ramadan to speak, Mansur said, is analogous to bringing in the descendant of a slave owner or an avowed segregationist "to speak about freedom."

when is Tariq Ramadan comin to Philadelphia?

"By the end of the evening, I knew the answer. Ramadan is building a worthy bridge on a rotten foundation"