The Arrogance of L.A.'s Sheriff 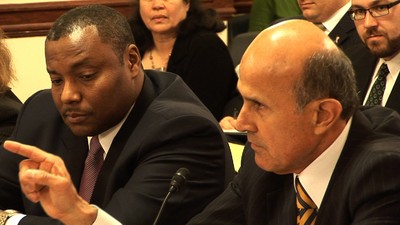 Hey, Robert Mueller, you and the FBI agents you supervise are ignorant and have it all wrong.

According to Los Angeles County Sheriff Lee Baca, those who consider the Council on American-Islamic Relations (CAIR) to be untrustworthy due to a history rooted in Hamas support are "amateur intelligence officer[s]."

Baca met with officials from CAIR and other Islamic organizations Tuesday and reinforced a defiant tone he struck on Capitol Hill last week. He was asked about his close relationship with CAIR, including numerous appearances at fundraisers for the group, during a House Homeland Security subcommittee hearing on disrupting domestic terror plots. "At what point," asked U.S. Rep. Mark Souder (R-IN), "do you start giving legitimacy to organizations that fund Hamas?"

Baca erupted, hollering at Souder. In his emotional response, Baca misunderstood that another part of Souder's question was directed at a different witness and Baca personalized it. His voice booming, he testified that "CAIR is not a terrorist-supporting organization. That is my experience. That is my interaction. And if you want to promote that, you're on your own."

Questions about the wisdom of associating so closely with an organization suspected of having ties to Hamas were unacceptable challenges to his patriotism, Baca added, noting his service in the U.S. Marines.

So, Director Mueller, never mind all the evidence the FBI has gathered showing CAIR's founders were part of a Hamas-support network in the U.S. in the early 1990s, or the internal documents showing CAIR was created as an arm of that network. And tell that grand jury in Washington, D.C. that is investigating CAIR to stop wasting its time.

The Sheriff knows better. He lectured Souder, saying, "I understand your fears better than you probably do. I've been in public office for 12 years, and I've been in law enforcement for 45. I object to your characterization of me. Attacking people personally in public office is what's the very thing that helps spur radicalism, because it defeats the strategies that you weren't listening to earlier, because you didn't come on time."

Souder, who seemed to be caught off guard with the ferocity of Baca's response, noted that he was at the hearing from the start. He did not characterize Baca in any way, but asked about the wisdom of Baca's relationship with CAIR.

Given the bluster, it's not clear what Baca does know about the organization with which he so eagerly partners.

CAIR founders Nihad Awad and Omar Ahmad appear on this internal telephone list (Ahmad's name is listed as Omar Yehya) for the Hamas-support network – called the Palestine Committee – and they've never offered a public explanation for that. Nor do they explain what they were doing at a 1993 gathering of Hamas supporters in the United States called to discuss ways to "derail" U.S.-led peace efforts between Israelis and Palestinians.

Baca hasn't explained why this is of no consequence to his law enforcement agency. His meeting Tuesday drew reporters from local television affiliates and the Los Angeles Times, but their stories lack any reference to the paper trail that prompted Souder's question and that might challenge the sheriff's insistence CAIR is clean.

The FBI cut off communication with CAIR in 2008, later explaining that "until we can resolve whether there continues to be a connection between CAIR or its executives and HAMAS, the FBI does not view CAIR as an appropriate liaison partner."

Then last month, Assistant Attorney General Ronald Weich wrote that trial testimony and exhibits in the Hamas-support prosecution of the Holy Land Foundation in Dallas "demonstrated a relationship among CAIR, individual CAIR founders, and the Palestine Committee. Evidence was also introduced that demonstrated a relationship between the Palestine Committee and HAMAS, which was designated as a terrorist organization in 1995."

The Los Angeles Times failed to mention that, but did quote Baca saying, "When you attack CAIR, you attack virtually every Muslim in America."

It's a mystery what that claim is based on. CAIR's membership rolls are relatively modest for a national organization claiming to speak for millions, and the group admits those numbers have dropped.

This is one of the more troubling aspects of Baca's stand because it reflects a monolithic view of an incredibly diverse population. And the Los Angeles Muslim community is one of the most diverse in the nation. There is a large Iranian population – largely composed of Shiites, a considerable Afghan population, along with African-American Muslims, a robust Somali community, Muslims from the subcontinent, Nigerians, Malayan Muslims, Indonesians, and Arab Muslims.

A community as ethnically and religiously diverse as the Los Angeles Muslim community should be represented by an equally diverse set of community leaders and organizations. Baca, however, insists on working solely with CAIR and the Muslim Public Affairs Council. Arab-Americans are overly represented in the California (and national) leadership for both of these organizations, reflecting an ethnic bias. Diversity is important for reasons both principled and practical.

But to Baca, the American Muslim community is of one mind and speaks with one voice.

His certainty about terrorism and the factors which drive it also pertain to the social sciences. In the Times article, Baca decried "this constant uninformed chatter about religion being a factor in terrorism." He said he knows better because he's read the Quran and worked with Muslim Americans:

"God has nothing to do with mentally ill people committing terrorist acts. If a mentally ill person is using Christianity, Buddhism, Islam, Scientology to say 'This is part of why I'm doing this,' I say, 'Well, guess what, don't act like you're God, you don't have God's authority.'"

Psychiatrists and sociologists who have studied terrorists reach a decidedly different conclusion. For one, mental illness rarely is a factor. In addition, religion can play a significant role in the radicalization process, as evidenced by the influential preaching of American-born cleric Anwar al-Awlaki in a string of recent terrorist attacks.

In an email response to the Investigative Project on Terrorism, University of California-Santa Barbara religious studies Professor Mark Juergensmeyer said his research has found that religion cannot be separated from many terrorist movements:

"[T]he absolutism of religious ideas and the religious image of cosmic war is frequently a factor in acts of terrorism carried out in the name of religious causes. I have interviewed dozens of people who have been involved either directly or as supporters of violent acts (including those related to Hamas, al Qaeda, Christian militia, Jewish extremist groups, and Buddhist, Sikh, and Hindu militant groups); none seemed pathologically abnormal to me (though I am not a psychologist). In all cases however, whatever social and political grievances they had were exaggerated through religious images."

Juergenson, director of the Orfalea Center for Global International Studies, detailed his research in his book Terror in the Mind of God in 2000 and has updated it since.

In the book, he writes:

"But more often it has been religions – sometimes in combination with other factors, sometimes as the primary motivation – that has incited terrorist acts. The common perception that there has been a rise in religious violence around the world in the last decades of the twentieth century has been borne out of those who keep records of such things. In 1980, the U.S. State Department roster of international terrorist groups listed scarcely a single religious organization. Almost twenty years later, at the end of the twentieth century, over half were religious."

Baca has made it clear he thinks he knows better than federal law enforcement officials who possess internal documents; that he is getting all the insight he needs from self-appointed spokesmen; and that terrorism is a mental health problem.

Have you read the mission statement of CAIR? They state: CAIR's vision is to be a leading advocate for justice and mutual understanding. and to enhance understanding of Islam, encourage dialogue, protect civil liberties, empower American Muslims, and build coalitions that promote justice and mutual understanding. If you were thinking instead of speaking off the top of your head, you would first look on the web and find out that there are a lot of religious organizations that do what CAIR is doing and from all different religions. Before you judge, understand.

What motivates Baca? Could it be promises of political support, campaign money, something else? His opinion and his vicious attacks on those holding a contrary view do not sound like they are based on his experience or training. He has said nothing to show that he is qualified by experience or training to set forth the opinion he provides. Would his opinion be accepted by a Court after voir dire examination? Probably not in my opinion.

He rails against amateur intelligence chatterers. but is he one of them?

Thanks for posting this clip in which Souder clearly misrepresents a "brochure" as being Sheriff Baca's, then denies he said it 2 minutes later. Souder is a greater threat to this great country than those he slanders.

Baca Must Be Mentally Ill

Sheriff Baca must have some kind of mental problem if he believes that anyone or any organization can represent or speak for all Muslims. He also overreacted when he read too much into a legimate question and responded inappropriately. What hidden love of CAIR would stir such a fervor? To paraphrase The Bard, "Methinks the sheriff doth protest too much." It is also a fact that most Islamic terrorists are religious fanatics. The only truly mentally ill suicide bombers are those that are extremely simple minded, and being used and murdered like fodder by their evil and cowardly 'handlers."

Are You Smarter Than A 5th Grader ?

Is there a Council on American Buddist Relations or Hindu or any other world religion? Why does Islam deem it necessary, to have a council in order to relate to American society.