The Creeping Homegrown Threat
The arrest of seven North Carolinians on conspiracy charges shows, says Steve Emerson, how the U.S. is becoming like Europe, where homegrown terror plots get stopped—or not—seemingly every week. 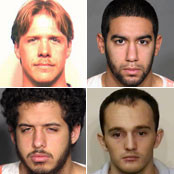 This week's arrest of seven North Carolina residents, including Daniel Boyd and his two sons, on charges of supporting terrorism and conspiracy to commit murder abroad, showed how the problem of homegrown Islamic terrorism is far more rampant than the media or the public is aware of. Just look at the major cases in the past year alone:

The Boyd case in North Carolina proves that radical Islamic ideology transcends economic class problems as has been claimed by pointy-headed sociologists. The Boyd family was white, had a middle-class existence, and had the economic opportunities afforded all Americans—just like most of the terrorists cited above—and yet chose to engage in jihad to the point that Daniel Boyd was willing to send his two kids on suicide missions to Israel.

That the FBI stopped all these plots is amazing, but they will never continue to bat a thousand. One of these days, the jihadists will succeed.

In the end, the mainstream media refuses to recognize that the "mainstream" Islamic groups are actually radical organizations that teach and imbue their followers with a hatred of the United States and Israel. These groups front as civil-rights groups, but in fact are radical Islamic groups whose constant message disseminated to the millions of Muslim followers is that the U.S. is an evil country engaged in a war against Islam. Once that message takes hold—and after all, these groups control the mosques, the Islamic newspapers, the Islamic schools, and the Islamic leadership from which American Muslims and converts get their ideas about the world—it is not a huge leap for some of them to become committed to violent jihad.

We are talking about a situation that is far more rampant than government leaders want to admit because the Islamic groups routinely throw the term "racist" at anyone who claims there is radicalism in the Muslim community. Two years ago, a poll was taken of American Muslims: 29 percent of young Muslims approved of suicide bombings. And those 29 percent are the ones that admitted their views. How many more would not tell the pollsters what they really thought?

The U.S. is becoming more like Europe, where homegrown Islamic terrorist plots get stopped (or sometimes succeed) nearly every week. It's because of the message that today's Islamic religious leadership hammers home: that the West is the enemy of Islam, that Christians and Jews are involved in a conspiracy to subjugate Islam. And so what is the logical result of these teachings? Many young Muslims hate the West. And of that number who hate the West, a certain smaller percentage—like the Boyds—are willing to take matters into their own hands and carry out jihad.

We have a major problem on our hands that no one is addressing, especially the Obama administration. After all, the Obama administration won't even use the term "radical Islam." If we cannot name our enemy, how in God's name are we supposed to defeat the enemy? This past week, Attorney General Eric Holder and Homeland Security Secretary Janet Napolitano gave widely heralded speeches using the term "homegrown terrorism" for the first time. But which homegrown terrorism were they referring to? White racists? The Aryan Nation? The KKK? Eco-terrorists? A close look at their rhetoric shows that the only time they used the word Islam was in referring to the city of Islamabad. In other words, we have met the enemy and he is us.

The problem is not all Muslims. Far from it. It is radical Islam, just like German Nazism and Italian fascism were pinpointed as the devils in World War II. And in Christianity and Judaism, there are Christian and Jewish terrorists, terms no one is afraid of using.

Documents obtained last year by the Investigative Project on Terrorism through a Freedom of Information Act request show that it was the Bush administration, lead by Homeland Security Secretary Michael Chertoff, that initiated the policy of prohibiting the use of the terms "Islamic terrorism," "Islamic militants," or "Islamic radicals"—or even the use of the word "jihad." These censorious vernacular prohibitions were the product of advice given by several Islamic advisers hired by Homeland Security, including Eboo Patel, founder of the Interfaith Youth Core, and Reza Aslan. The administration's reasoning here was the embodiment of appeasement; the goal: to protect Islam from any negative connotations. Islam today suffers from negative connotations not because of biased and selective media, as Aslan and others contend, but because so many acts of terrorism are committed by Islamists and so many of today's Islamic leaders rationalize these acts.

For Islam to restore its image as a tolerant religion will require Islamic leaders to admit that Islam has a problem, that the anti-women Sharia, the code of Islamic law, as interpreted by Islamists, is racist, that Islamic radicalism does in fact exist and is not the crude or Islamophobic imagination of writers like myself. The courageous Zuhdi Jasser, a Muslim leader from Phoenix, already admits this and more. We need more of him—not the apologists like Aslan who try to cover up for Islamic radicalism. Aslan's recent comments at a panel about the film The Stoning of Soraya M.—the story of an Islamic woman stoned to death by virtue of her husband conspiring to use the Sharia as an excuse to falsely accuse her of infidelity when in fact it was he who was guilty of infidelity—were simply "outrageous" according to those who heard him speak. After saying, "I guess it's up to me to put this into some sort of historical context," Aslan obfuscated by asserting (incorrectly) that "many cultures" struggled with the issue of stoning.

In the end, homegrown Islamic terrorism is not going to stop; it is manifestly going to be abetted by a demonstrably counterproductive campaign of prohibiting the term "Islamic terrorism" from being uttered. If we cannot describe who our enemy is in the hopes of discrediting them, how are we ever going to defeat them?

Steve Emerson is executive director of the Investigative Project on Terrorism and author of five books and countless articles on terrorism. His most recent book is Jihad Incorporated: A Guide to Militant Islam in the U.S.

Islam vs. the West

I am a new reader of this website, but Mr. Emerson in this piece seems to underestimate the threat of Islam to our Nation, it's values and way of life.

The problem is not just radical Islam, and it's terror-prone avatars: it is Islam as practiced anywhere in the world. Islam is simply incompatible with Western civilization. There there may be moderate Moslems, but there is no moderate Islam. Routinely proscribed or inhibited in Moslem countries is free speech, Christianity and rule of law, without which ingredients you will not create or sustain a society consistent with America's founding principles.

George Orwell wrote of the propensity of people to refuse to see what is in front of their faces. What is is front of our faces it the greatest threat to the existence of our way of life that we have ever been confronted with--and it is not just from bombers and other militants.

Our leadership class continues to refuse to confront (or even name) the problem.

The forewarned should be forearmed