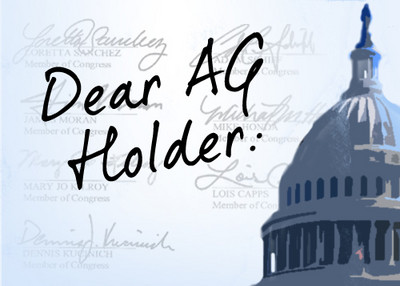 An aide to U.S. Rep. Adam Schiff (D-Burbank) contacted the Investigative Project on Terrorism to report that Schiff's name and signature appear erroneously on the letter to Attorney General Eric Holder. After reading about the letter in this story, Schiff wrote his own letter to Holder in which he said "I never saw or approved the letter and my signature should not have appeared on the correspondence."

According to the aide, a staffer from U.S. Rep. Loretta Sanchez's office brought the letter to Schiff's office and said Schiff approved having his signature added to it. Schiff, the aide said, never agreed to that. The aide said he did not know whether Schiff participated in any earlier discussions about the letter and could not explain why Sanchez's office had the impression that was on board.

The aide could not say whether Schiff, a former federal prosecutor, agreed with the concerns outlined in the letter or what issues he may have with its content. "He still hasn't seen the letter," the aide said. The request to have his name removed was out of principle since Schiff had not agreed to it.

The IPT asked to speak to Schiff directly, but that request was denied.

The original story appears below:

Seven House Democrats have written Attorney General Eric Holder invoking a list of grievances from radical Islamist groups and asking that Holder meet with representatives from those groups to hear their concerns, the Investigative Project on Terrorism has learned.

The grievances include the use of convicted felons as informants in mosques, alleged religious profiling of Somali Muslims in Minnesota and elsewhere and allegations that the FBI is working with foreign governments to question American citizens who are terror suspects. In the letter, the representatives said:

"These concerns raise legitimate questions about due process, justice, and equal treatment under the law. We hope you will meet with American Muslim leaders to ensure that core American values are respected for all Americans, regardless of race, ethnicity, or faith. For your convenience, we have attached a contact list of American Muslim leaders."

These issues have been pushed by radical Islamist groups for months. The letter's close tracking of the interest groups' positions indicates that their officials dictated its terms for the members of Congress to sign. In fact, the nine entities all are listed in exactly the same sequence in this release from the Council on American Islamic Relations (CAIR). The April 2009 release also cites two of the same issues as in the letter to Holder.

Schiff also serves on the House Judiciary Committee and the Permanent Select Committee on Intelligence.

Many of the groups listed for Holder to meet have radical histories and agendas. For example, the Islamic Circle of North America adheres to similar ideology as the Jamaat-i-Islami, which calls for Islamic revolution and creating an Islamist state in Pakistan. In the U.S., ICNA aggressively proselytizes among non-Muslims. The Muslim Public Affairs Council argues that Hizballah should not be a designated terrorist organization.

Three other groups listed for contact have direct roots in the Muslim Brotherhood, an international movement based in Egypt which seeks the creation of a global Islamic state, or Caliphate. Those groups include the Islamic Society of North America (ISNA), the Muslim Students Association, the Muslim American Society's Freedom Foundation, which is run by a convicted felon and the Council on American Islamic Relations (CAIR).

While CAIR claims to condemn terrorist attacks, it has not been able to specifically condemn Hamas suicide bombings or Hizballah bombings of civilian communities In a 2000 interview with Al Jazeera (translation here), CAIR Executive Director Nihad Awad defiantly refused to criticize Hamas or Hizballah:

"We do not condemn nor will we condemn any liberation movement inside Palestine, or inside Lebanon. If they want us to condemn a liberation movement inside Palestine, or Lebanon, they must condemn Israel dozens of times at all levels at all times. We will not condemn any organization. We are not under anyone's hammer. We are in the country of freedom. Why should we renounce principles?"

This is the leadership Holder is asked to meet. As reporter Mary Jacoby recently noted (free registration required):

CAIR "has been working to stoke tensions in local Muslim communities over FBI investigative tactics. CAIR is angry at the FBI, because the bureau embarrassed it. How? By cutting off contacts with CAIR's national leadership last year. Why did the bureau do that? Because evidence in a major terrorism-support prosecution in Texas showed CAIR's origins as a propaganda arm of Hamas."

Indeed, a letter from an FBI congressional liaison states that the Bureau can't rule out an ongoing "connection between CAIR or its executives and HAMAS" and would cut off outreach communication with the group until it can.

Letters like the Democrats' letter to Holder representing constituents' concerns are not unusual and are "part of the propaganda war that goes on beneath the surface all the time and part of their efforts to undermine law enforcement," said Bob Blitzer, who led the FBI's domestic terrorism section in the 1990s. He said he encountered "a couple hundred" letters of this nature during his career. Each is handled seriously because members of Congress signed the letters.

Many of the representatives who signed this letter have a history of supporting CAIR. For example, Kucinich sent a video message praising the organization to the CAIR-Chicago 4th Annual Banquet on February 23, 2008:

Sanchez has repeatedly attended annual CAIR banquets in Anaheim. Likewise, Honda spoke at CAIR's 2006 national banquet in Virginia, where called his hosts "the civil rights group that will speak on behalf of the community." Capps is included on a page of laudatory statements about CAIR, saying "I applaud CAIR for its important role in advocating for civil liberties, enhancing the understanding of Islam, and condemning acts of terrorism."

Moran is included on the same page, saying "It is through the activities of groups like CAIR that cooperation—rather than competition—between the various faiths can be achieved." Honda is quoted saying "CAIR's commitment to social justice and civil rights for all Americans will help our country to ensure that respect and tolerance exists for people of all religions and ethnicities."

In their letter, the representatives accept the claims of defendants in two criminal cases unqustioningly, despite sworn testimony to the contrary.

In Irvine, Cal., Ahmadullah Niazi, has been indicted on immigration charges. His brother-in-law has served as Osama bin Laden's security coordinator and Niazi is accused of lying about communication with him and a visit to Pakistan to see him. He also told an FBI informant that he considered bin Laden to be "an angel" and repeatedly discussed bombing buildings in California.

Niazi's supporters say he was entrapped by an agent provocateur and emphasize the informant's criminal record for forgery. They point out that Niazi even went to authorities in 2007 to report that the informant was discussing terrorist plots. In sworn testimony during Niazi's bond hearing in February, FBI agent Thomas Ropel III said Niazi went to authorities only after learning of a separate terror-indictment involving an informant and collaborated with CAIR official Hussam Ayloush to accuse the informant of being the terrorist.

Niazi then lied repeatedly about his conversations with the informant. For example, Niazi claimed that he and the informant had discussed jihad once or twice, when agents already possessed "at least 15 to 20 such conversations."

Agent Ropel: "We had discussed conducting terrorist attacks and blowing up buildings. We had discussed Mr. Niazi or anybody talking about sending money overseas and Mr. Niazi said none of those things were ever discussed between himself and this individual. And we had personally listened to recordings in which Mr. Niazi had instigated these conversations with that individual."

Judge: "He instigated the conversations?"

Agent Ropel: "Yes, Mr. Niazi did, specifically regarding these statements."

Another case involving informants four New York men were arrested after planting what the defendants thought were bombs outside New York synagogues. Their indictment alleges they also wanted to shoot down U.S. military planes.

The informant issue raised in the letter isn't expected to generate much excitement. It is "normal" to see informants in criminal investigations have felony records of their own, said Barry Sabin, former Deputy Assistant Attorney General for the Criminal Division.

There are guidelines and layers of supervision to ensure the sending informants into houses of worship are necessary investigative steps. That's a point FBI Director Robert Mueller made in testimony March 25 before the Senate Judiciary Committee:

In Minneapolis, CAIR has complained of religious profiling in the investigation and urged people not to meet with the FBI without an attorney present. This has triggered a backlash from some members of the Minneapolis Somali community, who have repeatedly demonstrated against CAIR for, in their view, hindering law enforcement efforts to stop the recruitment of young men to return to the African nation to engage in jihad. At least 20 young men are believed to have traveled from Minneapolis to Somalia in the past year, with one killing himself in a suicide bombing attack. Three other young men from Minneapolis have been shot and killed in Somalia in the past two months.

Two men have been indicted in connection with facilitating travel for the young men to Somalia, where they were to join up with the al-Shabab terrorist group.

These are among the grievances for which Holder is being asked to devote his attention. That the representatives would accept at face value the claims of an organization the FBI has concluded is not "an appropriate liaison partner" is disturbing. CAIR has documented roots in a U.S-based Hamas support network. Among secretly recorded wiretaps in evidence in the prosecution of the Holy Land Foundation for Relief and Development are conversations including two CAIR founders about deceiving Americans about their political ambitions and the outright declaration that "war is deception."

Before carrying their water again, the politicians may wish to find out whether the war ended.

This is some scary stuff. It is time we recognize that our government has become an oligarchy and these Democrats see Islamists as allies in reducing the American people to serfdom. We need to wrest control of our government away from people who despise America and fawn over any who hate us.