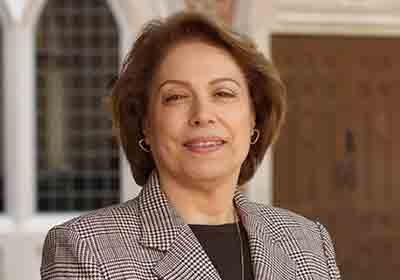 In June 2011, Azizah Al-Hibri was appointed as a member of the U.S. Commission on International Religious Freedom, which makes policy recommendations regarding international violations of religious freedom to the president and Congress.[1]

Al-Hibri is a law professor at the T.C. Williams School of Law at the University of Richmond and the founder of KARAMAH, a human rights issues group made up of female Muslim attorneys. [2] Her work focuses on women's rights in Islam, human rights and the relationship between Islam and democracy.[3]

As the following memo explains in detail, Al-Hibri previously sat on the board of the American Muslim Council (AMC) with Abdurahman Alamoudi, who was later convicted on terrorism charges for his role in a plot with U.K.-based al-Qaida linked operatives to assassinate then-Saudi Prince Abdullah. Her group KARAMAH has been heavily critical of government raids which led to Alamoudi's arrest and the charges against him.

Al-Hibri once implied the 1993 World Trade Center bombers were innocent, citing bias in the justice system against them. She has also scolded members of Congress for using the term "radical Islam." She opposed counterterrorism legislation during 1995 testimony before Congress, voicing complaints about its effects on charitable giving to Muslim organizations.

In the wake of the 9/11 attacks, Al-Hibri said that the attacks shouldn't be used to give Egyptian luminary Sayyid Qutb, whose works inspired al-Qaida and encourage Muslims to take up arms against the United States, a bad name.

From 1991-98, Al-Hibri served on the National Advisory Board of the American Muslim Council (AMC).[4] During her time with AMC, Al-Hibri served alongside radical AMC Executive Director Abdurahman Alamoudi.[5]

In 2004, Alamoudi pleaded guilty to several charges related to a plot to assassinate then-Saudi Prince Abdullah, including concealing financial transactions with Libya from the IRS, making false statements on a naturalization application, and violating terrorism-related sanctions prohibiting travel and commerce with Libya.[6]

As part of a statement of facts submitted with his plea, Alamoudi admitted to working with two other operatives whom he understood to be conspiring to carry out the assassination plot.[7]

Alamoudi was sentenced to 23 years in prison.[8] In July 2011, that sentence was reduced by 79 months due to Alamoudi's post-conviction cooperation with federal prosecutors on other terrorism-related cases.[9]

In June 1995, Al-Hibri gave testimony regarding the Comprehensive AntiTerrorism Act of 1995 before the U.S. House Committee on the Judiciary.[10]

The bill, which imposed stricter punishment for terrorism-related activity, was proposed on the heels of an Executive Order signed by President Bill Clinton.

Clinton's January 1995 order designated Hamas as a terrorist organization that threatens to "disrupt the Middle East peace process."[11] In the wake of the Oslo Accords, a peace agreement between Israelis and Palestinians, which Clinton helped broker, Hamas, the Palestinian Islamic Jihad and others launched a series of terrorist attacks in hopes of disrupting the budding peace process.[12]

The AntiTerrorism Act of 1995 made membership in a terrorist group a reason for the denial of a U.S. visa, prohibited material support to foreign designated terrorist organizations and created special deportation proceedings for foreign nationals where there is evidence that they might have been involved in terrorism activity, in addition to adding and revising many other counterterrorism measures.[13]

In her testimony, Al-Hibri took issue with the use of secret evidence for alien removal and fund raising limitations.

"Under this fund raising provision, the Good Samaritans and charitable organizations are criminally prosecutable if the President decides to designate a hospital receiving their donations as a terrorist affiliated hospital," Al-Hibri complained in a written statement. "The designation may be based on a tenuous belief that the hospital treats a large number of individuals who are members of a politically disfavored group and on an even more tenuous conclusion that the hospital therefore engages in terrorist activity," the statement continued.

"Our concern is that this section of the bill will be used and will be effective not in preventing terrorism – but in preventing fund raising for political viewpoints that are unpopular," she wrote.

Al-Hibri urged for the provision be eliminated from the bill altogether.

Regarding secret evidence, Al-Hibri wrote, "We find it extremely unlikely that a proper defense can be prepared when an attorney cannot release to her client the evidence against her.…In our rush to protect ourselves from terrorism, let us not trample on our principles."

Also while serving with AMC, Al-Hibri authored an article questioning the convictions of the 1993 World Trade Center bombers in a summer 1996 issue of the Islamic Society of North America (ISNA)'s publication Islamic Horizons:

"Many of us believed that the defendants in the World Trade Center case were innocent but had no chance of getting a fair trial because the system was loaded against them. Still, we must admit, these defendants were not lynched or tortured (at least not by the Americans). In fact, they were accorded a trial similar, at least in form, to what others in this country are accorded."[14]

Al-Hibri continued, explaining how this "anti Muslim bias" has worked its way into the court system:

"But we must also realize that this alleged loading of the system did not take place in court. Rather, it took years to achieve outside the court. In part, it was based on pervasive media reporting on Islam and Muslims that was based on ignorance at times and on prejudice at others. As a result, mass bias against Muslims was generated in this country and has been able to alter people's perceptions of who Muslims are. This bias did not alter procedural justice. The procedural system of justice was formally preserved, but substantive justice may sometimes be denied, as a result of bias."

In the weeks after the September 11th attacks, a National Public Radio (NPR) anchor asked Al-Hibri for her reaction to Osama bin Laden's involvement. "I don't know that it was confirmed. I know that there are suspicions that they belong to a loose network of terrorists that work with bin Laden," she responded.[15]

During the NPR interview, she also placed blame on the United States for the attacks. "And because in the view of some the U.S. is backing these regimes that are not democratic, the hostility transfers not only to their country, but to our country as well. And I think, therefore, when we talk about the situation, we should not focus as much on religion."[16]

Al-Hibri also defended Muslim Brotherhood luminary and al-Qaida inspirational scholar Sayyid Qutb. "I want to say that we should not give …the work of the Egyptian scholar Sayyid Qutb a bad name because of what these individuals are doing," she said.[17]

Al-Hibri's comments ignore the influence that Qutb's writings had in shaping al-Qaida ideology.[18] Qutb believed that people have the choice of either submission to Islam or jahiliyya, a condition of unbelief. For the Egyptian thinker, this also translated into the belief that Muslims have the obligation to take up arms against non-believers.[19]

Qutb was also well-known for his disenchantment with the West, which developed during the late 1940s. Milestones, one of Qutb's best-known writings, portrayed the United States as an oppressor engaged in an ongoing struggle against Muslims. It emphasized that Muslims should fight the enemy, the United States.[20]

"If materialism, no matter in what form, is given the highest value, whether it be in the form of a 'theory,' such as in the Marxist interpretation of history, or in the form of material productions, as in the case with the United States and European countries," wrote Qutb, "and all other human values are sacrificed at its altar, then such a society is a backward one, or, in Islamic terminology, is a 'jahili society.'"[21]

In another chapter in Milestones, Qutb instructs members of the Islamic movement to use violence to rid the world of such societies.

"This [Islamic] movement," said Qutb, "…uses physical power and Jihad for abolishing the organizations and authorities of the Jahili system which prevents people from reforming their ideas and beliefs but forces them to obey their erroneous ways and make them serve human lords instead of the Almighty Lord."[22]

A fall 1993 issue of The AMC Report included a picture of Al-Hibri and a caption that read: "Above Azizah al-Hibri (left) protests when House Foreign Affairs Committee Chairman Lee Hamilton (middle) voices his concern over what he termed 'violent, radical Islam.'"

The AMC article continued, "Azizah al-Hibri, a member of the AMC advisory board, warned that the very insinuation that Islam could be 'violent' or 'radical,' which is often made recklessly, is what contributes to the anti-Muslim prejudice in America."

In 1993, Al-Hibri formed KARAMAH, and continues to serve as the group's executive director.[23]

Laila Al-Marayati, wife of Muslim Public Affairs Council (MPAC) leader Salam al-Marayati, previously served as Secretary of KARAMAH from 1996-1997.[24] At an MPAC 2009 conference, Laila al-Marayati tried to minimize Hamas violence. "We need to stop talking about Israelis and Palestinians as if they are equals because they are not," she said. "We know that. And that rings hollow every time when you talk about they're partners and bringing people, because the Palestinians still are under occupation."

KARAMAH has been used as an outlet to criticize the FBI's 2002 Operation Green Quest raids in Virginia, which eventually led to the prosecution of Alamoudi, Al-Hibri's colleague at AMC.[25]

During the March 2002 raid, the FBI searched several homes, businesses and charities linked to the SAAR Foundation in Northern Virginia as part of an investigation into "a criminal conspiracy to provide material support to terrorist organizations by a group of Middle Eastern nationals living in Northern Virginia."[26]

The SAAR network was a group of non-profit and for-profit groups which investigators suspect has served as a front for terrorist organizations including the Palestinian Islamic Jihad (PIJ) and Hamas.[27]

An affidavit in support of a search warrant for these groups named them the "Safa Group." [28] Two well-known Islamic organizations, the International Institute of Islamic Thought (IIIT) and the FIQH Council of North America, were identified as a Safa Group companies by the U.S. Customs Service (USCS) case agent. [29]

No Safa Group entities like IIIT were indicted on terrorism charges as a result of the investigation. Information uncovered in the investigation, however, did lead to the prosecution and subsequent guilty plea of Abdurahman Alamoudi, Al-Hibri's colleague at AMC.[30] Please see section above for more on Alamoudi.

Al-Hibri organized a meeting around the time of the raids during which Muslims claimed that they had been targeted because of their faith.[31] An account of the meeting published in the Richmond Times Dispatch noted, "Muslims who live and work in Northern Virginia fear that the country's war on terrorism has become a war on American Muslim institutions."[32]

[12] Matthew Levitt and Dennis Ross, 2006, Hamas: Politics, Charity and Terrorism in the Service of Jihad: "Origins of the Hamas Dawa," Harrisonburg, Va: The Washington Institute for Near East Policy, pg. 14.