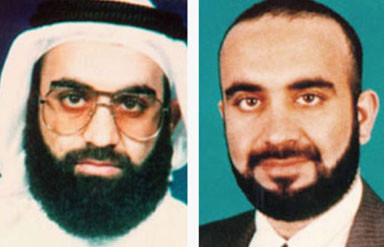 Khalid Sheikh Mohammed, often referred to as KSM, is a high-ranking Al Qaeda operative, identified by the 9/11 Commission Report as "the principal architect of the 9/11 attacks." He is also suspected of being involved in some of the most significant terrorist plots over the last two decades, including the 1993 World Trade Center bombing, a plot to assassinate the Pope during his trip to the Philippines in 1995, Operation Bojinka (a plot to blow up US airliners over the Pacific in 1995), an aborted 2002 attack on Los Angeles' U.S. Bank Tower, the 2002 Bali nightclub bombings, a suicide bomb attack on a synagogue in the Tunisian resort island of Djerba in 2002, the failed bombing of American Airlines Flight 63, and the kidnapping and murder of Wall Street Journal reporter Daniel Pearl in 2002. Many of these plots were conceived by KSM's nephew and infamous terrorist, Ramzi Yousef. KSM was finally captured in 2003 in Karachi, Pakistan.

KSM was born in the Baluchistan region of Pakistan and spent some of childhood in Kuwait. He was educated in the United States, graduating from the North Carolina Agricultural and Technical State University in 1986 with a degree in mechanical engineering. The next year, KSM went to fight against Soviet troops in Afghanistan. In the 1990s, KSM turned his attention towards anti-American activities. In 1996, KSM was indicted on terrorism charges in the United States District Court for the Southern District of New York. By 2001, he was put on the FBI's list of twenty-two Most Wanted Terrorists. KSM is currently being held at the prison camp in Guantanamo Bay.