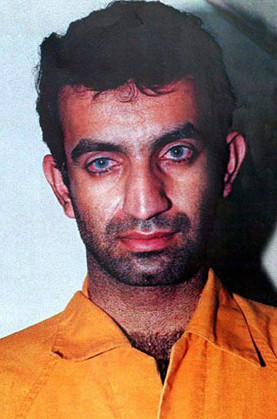 Ramzi Ahmed Yousef was born to Pakistani-Palestinian parents in Kuwait in 1968. His career as a terrorist took off in 1991 when he established ties with elements from the Philippine terrorist group, Abu Sayyaf in 1991 and proposed bomb attacks in the United States. He eventually met with the leader of Abu Sayyaf, Abubakar Janjalani, and discussed his ideas in detail.

Yousef flew to the United States in September 1992 along with Ahmad Ajaj, a Palestinian from the West Bank. Upon landing at JFK airport, Ajaj was detained by immigration authorities, as he presented a blatantly counterfeit Swedish passport. Inspecting Ajaj's luggage, immigration officers discovered that he was carrying bomb-making manuals and decided to hold him in Immigration and Naturalization Service (INS) detention until shortly after the World Trade Center bombing. Yousef, who claimed to be Iraqi, immediately asked for political asylum and was also briefly detained. Due to overcrowding in INS's holding cells were overcrowded, Yousef was released pending an asylum hearing. As soon as he was released, Yousef moved to an apartment in Jersey City and made contact with the New York–based militants who helped him execute his plan. He also continued to communicate with Ajaj, who managed to participate in the planning while in detention. Ramzi Yousef's original goal was to detonate several explosive devices in various Jewish neighborhoods in Brooklyn. Yousef ultimately changed targets to a single larger explosion at the World Trade Center.

On February 26, 1993, Yousef and his accomplices drove a rented van into the garage beneath one of the towers. Yousef set the bomb and they drove out of the garage in another car before it exploded. Six people were killed and over a thousand were wounded, but the explosion did not bring down the towers, as Yousef intended. He later told interrogators that he had intended to topple one building and have it crash into the other, with the goal of killing 250,000 people.

Khalid Sheik Muhammad, Yousef's uncle, was successful in al Qaeda's next attempt in the World Trade Center in 2001, using a plan originally conceived by Yousef. Hours after he fled the World Trade Center, Yousef was on a flight to Pakistan and was involved in a failed assassination attempt on Pakistani Prime Minister Benazir Bhutto only five months later. The following year he may have been involved in the bombing of a Shiite religious shrine in Iran that killed 25 people. Later in 1994, Yousef returned to the Philippines.

On January 6, 1995, a Manila police station received a late-night call regarding a suspected minor explosion and fire in an apartment building. The first officers dispatched were told that it was an accident caused by people playing with fireworks. The apartment building was close to an intended site of a pending papal tour, which led the local police commander to probe further. The police found an abandoned apartment with hot plates, wiring, and stores of chemicals. Upon returning downstairs, the police encountered the doorman, who identified one of the persons who had rushed from the apartment. The man identified himself as Ahmed Saeed and claimed to be a pilot. The doorman pointed to another man across the street smoking a pipe and talking on a cell phone and identified him as another apartment occupant. Saeed suddenly bolted and in the confusion before he was recaptured, the second man disappeared. The second man was Ramzi Yousef. Saeed, who was actually Abdul Hakim Murad, provided investigators with a gold mine of information and a shocking picture of the plot. Fingerprints found in the apartment confirmed that one of the other occupants was indeed the 1993 World Trade Center bombing leader, Ramzi Yousef. Materials found in the apartment confirmed that an assassination attempt on the pope was also in the making. Further details laid out on Yousef's laptops and computer disks described diabolical plans, code-named "Bojinka" (slang for explosion), to detonate time-delayed bombs on eleven US long-haul flights over the Pacific. The presence of Casio watches and references to timers caused investigators to press further. They learned that Yousef had been responsible for an earlier explosion on a December 11, 1994, flight from the Philippines to Tokyo in which a Japanese man was killed when an explosive device planted by Yousef detonated under his seat.

Investigators learned that Yousef's plans extended beyond remote detonation of bombs aboard planes. Murad had received extensive pilot training in the United States. He attended training in New York, Texas, and North Carolina in preparation for suicide attacks against specific US targets. What was missing, Murad explained, were trained pilots. Ramzi Yousef, no doubt using one of his twenty-plus aliases, escaped back to Pakistan. It was later learned at Yousef's trial that Murad's capture occurred because Yousef had sent him back to get the laptop with its incriminating evidence. Yousef himself had followed, at a distance, when Murad failed to return.

In February of 1995, close to two years after the bombing of the World Trade Center. Ramzi Yousef was captured in Pakistan. Yousef received a life sentence for the Bojinka plot and 240 years for the 1993 WTC bombing.