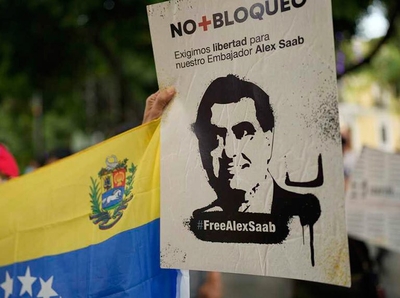 "Saab is a prisoner of war, of the U.S. imperialism war against Venezuela, free Alex Saab," said Maduro, who claims that Saab was his special envoy to Tehran for humanitarian purposes. The diplomatic immunity and a request for Saab's release will be discussed in a Dec. 12 hearing in Miami.

Saab was extradited there in 2021 following his 2020 money laundering arrest in Cape Verde while en route to Iran.

According to the U.S. Department of Justice, Saab was not a diplomat, but Maduro's bagman who helped Venezuela and Iran evade U.S. economic sanctions. In 2019, U.S. Treasury Department sanctioned the Colombian businessman over a food aid corruption scheme and illicit gold exports to Turkey and the United Arab Emirates.

"Alex Saab engaged with Maduro insiders to run a wide scale corruption network they callously used to exploit Venezuela's starving population. They use food as a form of social control, to reward political supporters and punish opponents, all the while pocketing hundreds of millions of dollars," said Treasury.

Furthermore, some Middle Eastern media outlets have referred to Saab as a "Hizballah man," indicating that his primary affiliation was with the Lebanese Shia terrorist group rather than the Venezuelan government.

A recent report by the U.S. cybersecurity firm Insikt Group revealed that the São Paulo Forum resolution is part of a robust influence operation by Venezuela and Iran to free Alex Saab.

Iran and Maduro fear the Colombian businessman will disclose their illicit activities to U.S. authorities. Furthermore, leveraging Saab's network and power, Iran might expand its influence in Latin America.

"Iranian and Venezuelan entities have sought to increase anti-American sentiment in Latin America through disinformation that claims the U.S. is unjustly sanctioning, kidnapping, and illegally detaining Saab," said the report.

Saab allegedly helped Venezuela buy gasoline additives, components, and received technicians from Iran in exchange for $500 million in Venezuelan gold in early 2020, after U.S. sanctions against Iran and Venezuela escalated.

The gold was transferred to Tehran on Mahan Air planes blacklisted by the Treasury Department. Mahan has a history of transporting operatives, weapons, equipment, and funds for the Islamic Revolutionary Guard Corps Quds Force (IRGC-QF) and Hizballah.

In addition, international intelligence sources told Colombia's Semana magazine that 12 to 17 Mahan Air planeloads of weaponry landed in Venezuela in 2020. In addition, two Iranian army ships tried to reach Venezuela before being intercepted by the U.S. military. The Iranian flights carried 1,050 missiles, 400 bombs, 500 rockets, and 35 radar systems, the magazine stated, citing Venezuelan Defense Ministry documents. According to arms analysts, Iran wanted the weapons in South America to threaten reprisal against the United States if it attacked Iran or its Middle Eastern allies.

The devastating effects of Alex Saab's lobbying for Maduro in Iran continue even while he is in prison.

The Venezuelan government signed a long-term cooperation agreement with Iran this summer, reinstating weekly flights between the two countries. Although the stated goal was to promote tourism, the planes likely transport drone components and other military equipment. The Iranian kamikaze drones deployed in the Russian conflict in Ukraine, allegedly made in Venezuela and transported on these aircraft, are also the outcome of Saab's mediation work in Iran.

"Alex Saab is the iceberg's tip," Venezuelan journalist Nelson Bocaranda told the Investigative Project on Terrorism (IPT). "Behind him are the corrupt dealings of Chávez and Maduro with Iran, including the trafficking of arms and drones and the exploitation of Venezuelan gold mines. "Saab's network has made him a tremendous facilitator for the government."

Partners in the shell companies with which Saab negotiated with Iran included his Lebanese father, Luis Saab Rada, who died in 2021. The Colombian press accused him of being a member of Black September, the Palestinian terrorist organization responsible for the murder of 11 Israeli athletes at the 1972 Munich Olympics.

The family connection likely facilitated Alex Saab's relationship with Iran, which is defending him with a robust disinformation effort.

During a press conference in August 2021, Iranian Foreign Ministry spokesman Saeed Khatibzadeh condemned the United States' extradition of Saab, claiming that it violated "all accepted principles governing the work of diplomats around the world, and can be a dangerous innovation in international law and relations between countries."

According to the Insikt Group report, Al Mayadeen, a pro-Hizballah media outlet based in Lebanon and a proxy for the Iranian government, is spreading disinformation about the Saab trial. Articles claimed that "U.S. is using torture methods against Saab."

"The Saab influence campaign is an example of how Iran is expanding its ideological and political influence in Latin America through narrative warfare," said the report.

"Credible rumors swirling that the White House wants to trade Alex Saab to Venezuela. By recognizing his sham claim to be a diplomat, they would sabotage the court case against him. It took years to build the sanctions package & indictment, & to secure arrest & extradition," Billingslea wrote.

If the judge recognizes Saab's diplomatic immunity, the case will legally be dismissed. Otherwise, the Biden administration might opt for the pardon, as suggested by former U.S. Special Representative for Venezuela, Elliot Abrams.

The U.S. government, which has not issued a statement on the matter, might also seek a prisoner swap similar to one made in early October. Two of Maduro's wife's nephews, who were jailed for years on drug smuggling convictions in the United States, were exchanged for seven American prisoners in Caracas.

Saab's potential release will not address all of Biden's difficulties.

"Saab is and will always be a highly talented financial operator of the Maduro government, which does business with crime, murderers, and those who operate illicit trades," said Bocaranda.

Furthermore, Venezuela cannot satisfy the oil needs of the United States, which would operate in the country together with Tehran.

The Venezuelan refining industry is dependent on Iran, which has exported 6.8 million barrels of crude oil this year. Furthermore, in October, the Islamic Republic inaugurated its first overseas refinery in Venezuela, El Palito, which refines 100,000 barrels of Venezuelan crude oil per day.

Saab's freedom would transform him into an even more powerful agent for Tehran, a Trojan horse in Latin America. Negotiations have stalled over Iran's 2015 nuclear agreement with the United States and other nations to limit its uranium enrichment in exchange for sanctions relief.

If the deal fails and U.S. sanctions would not be lifted, Saab and his network might give Iran more ways to evade them in Latin America.