Artists Under Fire
The BDS War against Celebrities, Jews, and Israel

To read an interview with author Lana Melman, click here. 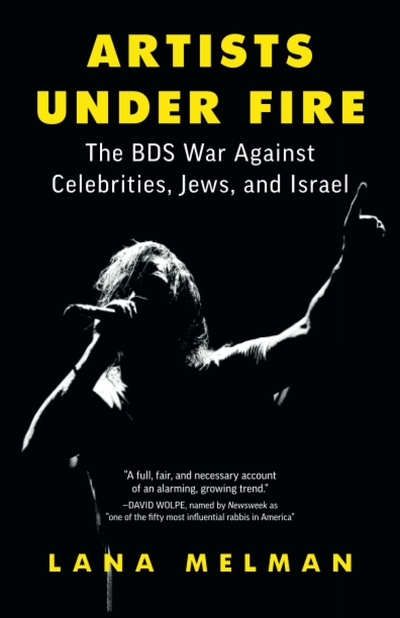 The announcement came earlier this month on social media: the folk band Big Thief would not be performing as scheduled in Tel Aviv. It was a complete reversal of the band's statement only a week earlier, when it announced its determination to "remain open" to views about Israel and the Boycott, Divestment, and Sanctions (BDS) anti-Israel movement, and "to love beyond disagreement."

It was also just the latest in a long line of cultural events canceled, muted, or destroyed by one of the most powerful and effective anti-Jew movements since the Holocaust.

In Artists Under Fire (Lioncrest, 2022), author and activist Lana Melman lays out clearly and succinctly just how big a threat BDS and its cultural boycott of Israel have become – not only to Israel, and not even only to Jews worldwide, but to the flourishing of the arts everywhere. As Melman writes, "The BDS campaign against Israel seeks to use the celebrity of artists as a tool to destroy Israel and stir up hate against Jews worldwide ... They want international artists to shun performances in Israel and international venues to rescind invitations to Israeli artists. Their rhetoric reeks of classic antisemitic tropes, demonizes Israel, and is stirring up jew-hatred worldwide."

Part of the problem, the author explains, is the general acceptance of the BDS movement's self-defensive argument that it is not anti-Jewish, but "merely" anti-Israel, a protest against the country's politics, not its people. Melman isn't buying it. "We are told antizionism is about Israel, but in fact, it is an attack on Jews – and many Jews either do not see that or are bullied into not accepting what they see," she writes. "Antizionism is antisemitism. It traffics in modern-day blood libel (the false allegation that Jews murder Christians during their rituals) and anti-Jewish conspiracy theories about money and power. It demonizes Israel and creates an environment that makes Jew-hatred more acceptable worldwide. And it singles out the Jewish homeland for criticism and reproach disproportionate to its errors."

Just how dangerous this is, and how much damage BDS has already done, turns out to be worse than you might think. "Numerous polls conducted in recent years have shown a direct correlation between antizionism and antisemitism, with large segments of the population echoing the false accusations circulated by BDS," Melman explains in Artists Under Fire. "An Action and Protection League (APL) poll collected five hundred thousand data points from a total of sixteen thousand people in sixteen EU countries from December 2019 to January 2020. One-fourth of those polled equated Israelis to Nazis and agreed that this justifies an international boycott of Israel...and 21 percent expressed their belief that 'there is a secret Jewish network that influences political and economic affairs in the world.'"

No wonder antisemitic attacks have grown worse and more frequent in most of Europe, as well as in the United States, in recent years.

Much of this antisemitism comes not, as many would expect, from neo-Nazis and extremists on the far right, but rather, from so-called 'progressives" and "social justice warriors" on the left. It often attaches itself – ironically enough – to "wokeness," a movement theoretically based on supporting the rights of minority groups.

That Israel is the world's sole Jewish state (despite a population that also includes Muslims, Christians, and others), encircled by 14 Muslim countries – many of which have made no secret of their desire to wipe Israel's Jews from the face of the planet – "woke" BDSers nonetheless view Israeli Jews as the oppressors, and Palestinian Muslims as their victims. "Proponents of the cultural Boycott, Divestment, and Sanctions campaign against Israel claim their cause is human rights and their methods are nonviolent," Melman writes. "They have mastered the language of the enlightened left, but scratch the surface and you will see that their tactics – along with their messaging – are anything but peaceful."

Indeed, BDS refuses any possibilities for peace in the region. "There is no declaration in favor of a two-state solution. In fact, there is no call from BDS for a democratic Palestinian nation that would live in peace and security with Israel," Melman writes.

It was a scathing message. And throughout Artists Under Fire, Melman similarly tears the mask off the BDS movement, its organizers and its adherents, exposing not just their hypocrisy, but their true intent: "BDS does not seek to educate," she writes, "it seeks to intimidate."

Yet that intimidation does more than just threaten the lives and well-being of artists, several of whom – including singer Lana del Rey – have backed out of performances in Israel for fear of their own safety. It represents a deeper political and cultural threat. "The threat to freedom of expression anyway is a threat to that freedom everywhere," Melman asserts. "BDS is creating a handbook for the repression of artistic expression in democratic societies. The world looks away at great peril."

While Melman focuses on performing artists – particularly musicians such as anti-Israel activist Roger Waters of Pink Floyd and Patti Smith – the censorship and anti-Israel boycott goes further. Other artists whose anti-Israel, pro-BDS stances have motivated their antisemitic activism include graffiti artist Banksy, actress Susan Sarandon, writers Alice Walker and Sally Rooney, and more. True, their freedom of expression has not been affected by their own choice not to participate in Israeli culture – refusing, for instance, to perform there or have their books translated into Hebrew, or in Banksy's case, outright supporting militant Palestinian propaganda with antisemitic imagery. But as lawyer and Times of Israel columnist Craig Emanuel has written, "The actions taken by the BDS movement and similar organizations are not only a threat to the collaboration of international artists and entertainers. They also create roadblocks between people from different cultures who share something in common, and who want to be able to engage in open and honest discussions regarding cultural, political and even religious differences that can lead to the possibility of better understanding issues that are frequently misunderstood."