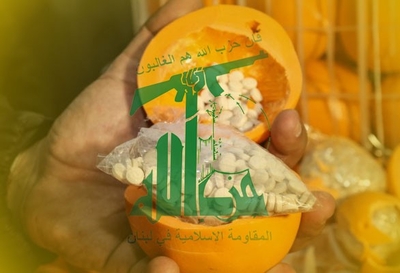 Trade in the amphetamine-type stimulant Captagon in the Middle East grew exponentially in 2021, to top $5 billion, posing an escalating health and security threat, a report this month from the New Lines Institute revealed.

Hizballah, Iran's proxy in Lebanon, is one of the pivotal actors, along with Syrian President Bashar Assad's family and high-ranking members of his regime. "Lebanon has served as an extension of the Syrian captagon trade, a key transit point for captagon flows, with Syrian government-connected Hizballah leaders participating in the trade's expansion," said the report's authors, Caroline Rose and Alexander Söderholm.

Analysts believe drug trafficking is a key Hizballah revenue source, providing it with hundreds of millions of dollars annually.

Confronted with severe economic limitations due to U.S. sanctions, the coronavirus pandemic, and Lebanon's economic collapse, Hizballah appears to be increasing its reliance on illegal activities, especially Captagon smuggling, to fund its operations. In June 2021, a Europol study warned that Hizballah operatives were suspected of "trafficking diamonds and drugs" and laundering the proceeds through European countries.

"The key difference between Hizballah's business operations and those of other criminal syndicates is that amassing wealth is not itself the end goal, but a means to promote the revolutionary political and military ambitions of Hizballah and its patrons in Tehran. The same networks that generate income also provide the infrastructure for terror attacks," said Emanuele Ottolenghi, senior fellow at The Foundation for Defense of Democracies.

Counterfeit Captagon, originally a German name for the medicinal drug Fenethylline, proscribed by the United Nations in 1986, is produced in Syria and in Lebanon's Hizballah-controlled Beqaa Valley. From there, it is smuggled out towards the Gulf market or through the Syrian port of Latakia, a Mediterranean port that has since become a hub of containerized Captagon shipments.

In recent years, Hizballah has gained control of a portion of the 15 Syrian large-scale Captagon production centers, most notably in Damascus, along with military units of the 4th Division, which is overseen by the Syrian president's brother, Maher al-Assad. In Lebanon, Hizballah operatives are estimated to run 20 small Captagon plants.

Its expanding markets pose "a concerning health risk in the region as well as a geopolitical risk to the U.S. and its partners' regional security interests, said the report from New Lines, a Washington-based think tank focused on security and geopolitics.

Captagon, also called the "jihadists' drug," or "chemical courage," is highly addictive and helps people to stay awake for long periods. It also can provide a false sense of bravery and inhibit a user's ability to reason.

"The trade's role as a revenue source for state and non-state actors such as the Syrian government, Hizballah, and state-affiliated militias has fueled malign activities that have exacerbated insecurity, encouraged corruption, and empowered authoritarian behaviors," said the report.

The April 2021 arrest of Hizballah operative Hassan Muhammad Daqo, dubbed the "Emperor of Captagon in Syria and Lebanon," did not slow this disaster. A Syrian businessman with Lebanese citizenship, Daqo was involved in the largest drug bust in Malaysia's history: 94.8 million Captagon pills worth $1.26 billion.

"This man is a tool in the hands of Hizballah," said former Hizballah member Salah Mansour, noting Daqo's business grows as he carries out Hizballah's orders.

Daqo's arrest did not slow the Captagon trade and ongoing interdiction efforts. Saudi Arabia banned Lebanese fruit and vegetable imports last May following the seizure of more than 5 million Captagon pills hidden in a pomegranate shipment.

The Syrian Observatory For Human Rights (SOHR) reported earlier this month that a group of smugglers with Hizballah ties transported a large quantity of Captagon pills and marijuana into Jordan.

Criminal activities such as drug trafficking are an essential component of Hizballah's fundraising. According to Ottolenghi, "open-source studies suggest that involvement in illicit activities generates roughly 30% of Hizballah's annual operating budget of roughly $1 billion, and that Iran provides the rest. But a closer look at Hizballah's narco trafficking operations suggests its proceeds from criminal activity may far exceed prevailing estimates."

Hizballah operatives have long been involved in cocaine trafficking in Latin America, with other actors such as the Calabrian Mafia 'Ndrangheta, described by the Organized Crime and Corruption Reporting Project as "one of the largest and most sophisticated criminal organizations in the world." Captagon enabled it to establish ties with the Neapolitan Mafia Camorra, as revealed by the large July 2020 Captagon seizure at the Port of Salerno. Authorities found 84 million pills worth more than €1 billion. In 2019, 33 million pills worth almost €600 million were seized in Greece.

Hizballah officially denies any involvement in drug trafficking to preserve a conservative image, particularly in the face of growing domestic opposition with political rallies and anti-corruption campaigns. Hassan Nasrallah, Hizballah's secretary general, and other political leaders have shifted blame to tribal leaders and political barons in the region.

But a senior Hizballah official is among the suspected smugglers. The Israel Defense Forces (IDF) says Khalil Yusif Harb, runs a drug and weapons smuggling operation along the Israel-Lebanon border. Harb has a long history within Hizballah's leadership, having served as chief of special military operations and as controller of its Yemen operations. The U.S. State Department issued a $5 million reward in November 2018 for information on Harb, describing him as a close Nasrallah adviser. The U.S. Treasury designated him as a terrorist in 2013. 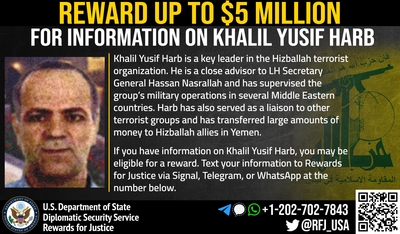 However, the Washington Institute for Near East Policy's interactive database contains hundreds of government documents and court records connecting Hizballah operatives to drug trafficking, money laundering, and other criminal enterprises worldwide and a timeline of terrorist attacks financed with such illicit proceeds. A recent example was a Hizballah plot to assassinate a former Israeli intelligence official in Colombia, reportedly to avenge the January 2020 death of Islamic Revolutionary Guard Corps (IRGC) Quds Force leader Qasem Soleimani.

Iranian and Hizballah smuggling operations continue to supply the Houthi militia in Yemen. Shipments of weapons, ammunition, fuel and drugs including Captagon, were seized in Yemen between July 2016 and July 2021, an Almasdar Online investigation found.

While Captagon is reportedly used to instill bravery among Yemen's Houthi fighters, arms enable them to launch attacks on Yemeni cities. Additionally, weapons allow them to target key infrastructure within Saudi Arabia and the United Arab Emirates such as the Aramco oil facilities in Jeddah at the end of March and threaten international shipping lines in the Red Sea.

Captagon is not exclusively a Middle Eastern phenomenon, but its use has expanded into the Mediterranean, generating security issues that require regional and international response.

Preventing its illicit operations from expanding like a hydra demands a concerted effort by law enforcement, intelligence agencies and governments similar to Hercules against a monster that survives on drugs and crime.