A Terror Supporter Goes to Washington 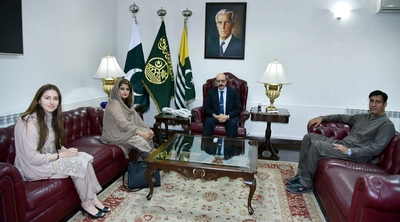 A former president of the Pakistani state of Azad Kashmir, Masood Khan, has been named as Pakistan's ambassador to the United States.

Certainly, appointing a new ambassador makes sense. After all, Pakistan's image is perhaps at its lowest point. Its role in aiding the Taliban has been acknowledged and discussed in parliaments and press outlets all across the world, particularly following the collapse of the Afghan government and the revival of a brutal theocracy.

A brief glance at Khan's history as a former official of the foreign service of Pakistan, and subsequently an ambassador to both the United Nations and China, might give an impression of great statesmanship and the cautiousness that usually goes along with such offices.

But Masood Khan is not a harbinger of détente. He is a dangerous radical with a long history of working with Islamists in the West and jihadists in the East. His appointment is evidence of an increasingly dangerous Pakistani regime, which is working to coopt and support Islamists all around the world, including in the United States.

Examples of Khan's jihadist links are shamelessly plentiful. In July 2021, while serving as president of Azad Kashmir, Khan provided a "special message" on the "fifth martyrdom anniversary of Kashmir's most beloved freedom fighter," Burhan Wani. A commander of Hizbul Mujahideen, a designated terrorist organization under U.S. law, Burhan Wani persuaded Kashmiris to "join the holy war" against India, offering the "promise of a fulfilled life hereafter."

At the commemoration event, Masood Khan declared: "We grieve today for Burhan Wani. . . . He lives on . . . in our hearts. He sacrificed his life for a cause." Pakistani media reports add that Khan claimed Wani was a "role model for the freedom fighters across the globe" and that "the liberation of Kashmir and a defeat of India is the writing on the wall."

Wani is not the only Hizbul Mujahideen jihadist regarded favorably by Khan. In June 2017, following the U.S. State Department's decision to designate the terrorist organization, mainstream Pakistani media reported that the "AJK President expressed full support for Hizbul Mujahideen." Khan further declared that U.S. sanctions against the terrorist group's leader, Syed Salahuddin, were "unjustified." Salahuddin is also the chair of the United Jihad Council, a Kashmiri umbrella group for terrorists backed by the Pakistani regime.

In addition, official press releases published by Khan's Presidential office includes unabashed praise of other Hizbul Mujahideen leaders. In 2020, one such statement reported:

Paying homage to top Hizbul mujahideen commander, Junaid Sehrai, and his associate, Tariq Ahmed for offering the supreme sacrifice of their lives for the freedom of their motherland, President Khan said all the martyrs and their sacrifices are an asset for the liberation movement. He reiterated the Kashmiris' resolve to accomplish the mission of their martyrs at all costs.

Hizbul Mujahideen is not the only terrorist organization that Khan is willing to embrace. In 2019, Khan, alongside senior officials of the Pakistani government, took part in the All Parties Kashmir Solidarity Conference in Islamabad. Indian media revealed that Khan shared the stage with Fazlur Rehman Khalil, founder of Harkat-ul-Mujahideen (HuM), which the U.S. State Department designated as a terrorist organization in 1997. In 2014, the U.S. named Khalil himself as a Specially Designated Global Terrorist. The Treasury Department notes that Khalil "maintained a close relationship with al-Qaida, including with Usama bin Laden (UBL) prior to his death. Khalil was a key member of UBL's International Islamic Front and a cosignatory of UBL's first fatwa issued in 1998 calling for attacks against the United States."

The Center for International Security and Cooperation at Stanford notes that Khalil's HuM was freely based in Pakistan and has "received support from Pakistan's Inter-Services Intelligence (ISI) since its formation." The group was "repeatedly reported to be in close contact with Osama Bin Laden, and engaged in bombings, hijackings, kidnappings and executions of Indian soldiers, government officials, civilians, and foreign tourists."

It doesn't stop there. Masood Khan is also a supporter of the violent South Asian Islamist movement Jamaat-e-Islami, whose killing squads helped the Pakistani military carry out acts of genocide against Bangladeshis in 1971. Statements published on the official website of the president of Azad Kashmir feature excerpts of speeches Khan has given at Jamaat-e-Islami demonstrations and events, in which he "paid tributes to Jamaat Islami Pakistan for playing an active role in Pakistan and Azad Jammu and Kashmir."

These are far from the only examples. Khan has favorably compared Kashmiri "freedom fighters" to the Taliban and is a supporter of Aafia Siddiqui, a convicted terrorist operative known as "Lady Al-Qaeda."

Khan's extremist sympathies are not just limited to his home region. The new ambassador has also worked with terror-tied Islamists outside of Pakistan. In 2019, journalist Abdullah Bozkurt tweeted photos of Masood Khan "visiting Turkish intelligence linked charity outfit #IHH that is accused of sending arms, supplies to al-Qaeda linked jihadist groups in #Syria & #Libya . IHH runs operations in Kashmir area." Branches of the IHH have been designated as terrorist organizations in Germany, the Netherlands, and Israel.

As the cause of Kashmir gains ground as a rallying cry for Islamists, Khan has become an important figure for many radical organizations and individuals all around the world. Even Islamist operatives across the West have enjoyed close contact with Masood Khan. While Khan served as AJK president, for instance, extremist charities such as Helping Hand for Relief and Development (HHRD) repeatedly enjoyed praise from him and his official office, which declared its commitment to "cooperation" with the group.

HHRD is a leading American proxy for Jamaat-e-Islami. In 2017, HHRD openly partnered with designated terror group Lashkar-e-Taiba, which carried out the deadly 2008 Mumbai attacks in which 166 were murdered. HHRD also funds and partners with Jamaat-e-Islami's welfare arm, Al-Khidmat Foundation, which is closely involved with the Kashmiri jihadist organization Hizbul Mujahideen, and which proudly boasts of funding Palestinian terrorist group Hamas for its "just jihad."

Masood Khan's contact with Western Islamists is likely also driven by the Pakistani regime's agendas. Under Imran Khan, the Pakistani government has worked particularly hard to increase its influence within American Islam.

In 2019 the Pakistani prime minister addressed a conference organized by a leading American Islamist organization, the Islamic Society of North America (ISNA), in which he urged American Muslims to "approach your members of Congress [and] senators" to discuss the ostensible evils of India and raise the question of Kashmir. In 2018, the Canada Revenue Agency suspended a branch of ISNA after the organization transferred $136,000 (Canadian) to Kashmir, where it is suspected to have fallen into the hands of Hizbul Mujahideen.

Since Khan's 2019 speech, Pakistani-regime entities and officials of Imran Khan's PTI political party have been vigorously campaigning for Islamist causes within the United States, in partnership with American proxies of Jamaat-e-Islami. In Houston, PTI officials — one of whom was directly appointed by Imran Khan as his government's representative in the United States — established the International Humanitarian Foundation (IHF), which — in close collaboration with domestic American Islamist organizations and other Pakistani-regime-linked lobbying groups and community organizations — organized enormous protests against the visit of Indian prime minister Narendra Modi, spending hundreds of thousands of dollars on advertising and employing lobbyists in D.C.

The IHF partnered with a dozen American Pakistani and Islamist organizations to carry out its work, including the Houston-based 501(c)3 Friends of Kashmir, which claims partly to work out of the Pakistani consulate in Houston and frequently collaborates with senior PTI officials. In October 2 of this year, Friends of Kashmir hosted an event with Shehryar Khan Afridi, a senior PTI official and former cabinet minister in Imran Khan's government.

Led by an activist named Ghazala Habib, Friends of Kashmir is also openly aligned with jihadist causes. In 2017, the group organized an event with terrorist operatives Yasin Malik and Shabir Shah, both of whom were arrested by Indian police in 2019 because of ties to designated terrorist organization Lashkar-e-Taiba. Habib herself is reported to have been an appointed representative of both the late jihadist leader Syed Ali Geelani and Asiya Andrabi, founder of the jihadist organization Dukhtaran-e-Millat. Masood Khan has expressed praise for both.

In fact, Masood Khan appears to have operated on the edges of all these initiatives. He is a close associate of Ghazala Habib. Khan has often posted photos and comments about his meetings with Habib, including at his personal residence in Pakistan. 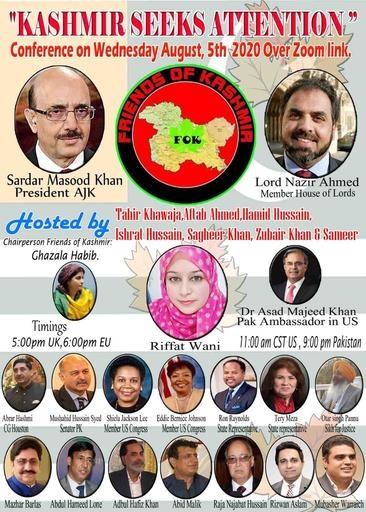 In 2020 Khan was listed as a star speaker of an event organized by Friends of Kashmir, in collaboration with the Pakistani embassy, and which also featured American congressmembers, suspected Pakistani ISI agents, Islamist operatives, and Pakistani-backed Sikh separatists.

Other examples of Khan's Western Islamist friends include his contacts with American Islamists aligned with the Turkish regime and anti-Hindu Indian-American Islamists, as well as U.S. Jamaat-e-Islami TV channels.

Curiously, although many publications have noted the appointment of Masood Khan as Pakistan's new ambassador, there has been no discussion of his ideological leanings and his long history of radical affiliations. Within Pakistan, commentators expressed surprise that Khan was chosen but framed him as a "veteran diplomat" who reflected Islamabad's desire to present Pakistan's "standpoints" in an "improved manner" with "lucid talking points."

What are these "standpoints," then? Islamabad's long support for the Taliban is driven by a lot of factors, including tribal links as well as the politics of Deobandi Islam (the underlying theology behind both the Taliban and significant sections of Pakistani society). But, as former Pakistani ambassador Husain Haqqani has pointed out, many of Pakistan's activities also revolve around an obsession with undermining and attacking India, and control of Afghanistan has been seen as crucial to those efforts. Now, with a Taliban regime in power, senior Pakistani politicians are increasingly discussing the use of the Taliban to "liberate Kashmir."

In August 2021, Syed Salahuddin, the Pakistani-backed leader of Hizbul Mujahideen (the same terrorist organization supported by Ambassador Masood Khan) called for assistance from the Taliban, declaring: "I pray to Allah that he strengthens the Islamic Emirate of Afghanistan so that they may support Kashmiris against India."

Masood's appointment will serve not just to advance Pakistan's influence within American Islamism but also to assist Pakistan's Islamist-driven foreign policy against India. As the former leader of Pakistani Kashmir, he is the obvious choice for a spokesperson to divert attention away from Pakistan's reprehensible role in Afghanistan and toward the question of Kashmir — denouncing India and justifying Pakistani-backed jihad.

Masood Khan is the latest example of a renascent theocratic Pakistan. His tenure in D.C. will empower radicals in both the U.S. and South Asia. He is an open supporter of U.S.-designated terrorists, dressed in the niceties of international diplomacy. Although foreign ambassadors are rarely rejected by Western countries, the Biden administration should at least consider this option for Masood Khan.

Sam Westrop is director of Islamist Watch, a project of the Middle East Forum.