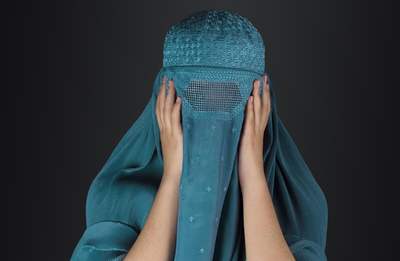 In Bamiyan province, through which the Silk Road once flourished and the towering statues of Buddha once stood, an Afghan woman's naked body has just been found. She had been raped and tortured to death.

Her shamefully naked corpse was meant to terrify other women and to serve as a warning about what can be done to them simply because they are women. It is also a statement of the contempt in which women are held by those Afghans who kill them.

The woman who told me about this atrocity referred to the Taliban as "wild animals wearing human masks." She, and hundreds of other endangered and educated women, all live in hiding. They exist in a permanent state of terror. The women understand that it is far too dangerous for them to venture out.

However, one of these women had a medical emergency last week. She had to risk going out to see her doctor. Luckily, the Taliban only beat her badly; they did not kill her.

A mother tells me that her "main problem is with my kids who have never seen such barbaric behavior before. They are continually asking us what we must have done wrong to account for having to hide. They are being seriously mentally harmed. I have no good answers for them."

There's more, much more. A young man was shot to death in Badakhshan last week for listening to music. At the end of October, the Taliban shot three people to death for playing music at a wedding. We know that impoverished and starving families are selling their 9-year-old daughters to strangers for food money; and, I've been told that criminals are offering money for human organs.

The Taliban have been hunting house by house, in district after district, for known women's rights activists. Suddenly, a woman—a friend, a colleague, a neighbor—disappears and is never seen again.

Is this the group with whom President Biden believes he can or should negotiate? Contrary to the prevailing "woke" wisdom that America is to blame for all human suffering (I think not) – still, what are our responsibilities to alleviate such suffering – even if we did not cause it? Islamic gender and religious apartheid, as well as tribal shame and honor customs, are indigenous and pre-existed all and any Western influence.

People were appalled by the way in which America left Afghanistan in August. Others believe that we should never have undertaken something that we could not accomplish, namely the westernization or modernization of such a tribal, deeply corrupt, and religious Muslim country.

So, here's a radical question: Did America and Western forces absolutely have to leave?

Here's what Bing West, a former assistant Secretary of Defense, former combat Marine in Afghanistan and elsewhere, and author, has to say on this very point. According to West, military experts advised both presidents, "Don't do it, Sir, don't withdraw."

West criticizes the decision to remain in the country for 20 years. He describes the Taliban as a "cancer inside Afghanistan but not a global scourge as ISIS would like to be." He also criticizes the various American administrations which were far too "ignorant about Islam. We underestimated the influence of the mullahs down to the smallest villages."

Many former soldiers and documentary filmmakers expose the "dark" side of Afghan life. Ben Anderson's documentary This is What Winning Looks Like is very eye-opening indeed. Anderson shows us the unbelievable level and kinds of corruption that is rampant among Afghans: Government officials, villagers, farmers, police chiefs, drug dealers, and the Taliban. Afghan officers are often stoned on heroin, and employ vigilante (in)justice. Those who call them out for raping children, mainly boys, keeping children as slaves, are themselves soon in the cross-hairs.

But once there, Bing West does not think we had to leave. "We fought a Cold War without blinking against Soviet Russia for a long time. Nothing good ever comes of quitting a battlefield. (Doing so) will come back to haunt us. Why withdraw at all? With 16,000 troops from NATO, the EU, Canada, and the United States we could have kept fighting them forever, held onto the airports at low cost... The Taliban would never have been able to take over."

How do I know all this?

I know because my team of feminist "digital Dunkirkers" has been privileged to be in touch with these front-line warriors/potential victims in the war against women which the Taliban and other Muslim terrorist groups are currently waging.

We have been evacuating such women into the West but now, time is running out. The governments of Qatar and the UAE simply will not accept any more Afghan refugees until those who are already there are moved out. And, they will not consider any such refugees for residence or citizenship. Western countries have already reached their quota, and many refuse to take any Afghan refugees at all.

The bottleneck does not just exist in the refugee camps in the Middle East. The entire world either will take no Afghan refugees – or no more such refugees. Desperately hunting for a safe enough country "for now," reminds me of what it might have been like to hunt for countries for Jews before and during World War II.

The problem is not so much with educated Afghan women as it is with the men who accompany them (and without whom the women will not leave).

Afghan men are known for their verbal, psychological, and physical violence towards their own women; and, potentially, towards infidel women and men. They are more likely than women to become jihadists. Even as non-violent refugees, Afghan men are known to be demanding, deceptive, controlling, and greedy.

Why have I put my life on hold for the last five months in order to help evacuate Afghan women?

Once, long ago, I was held captive in Kabul against my will. I've written about this many times. Perhaps I'm rescuing myself again and again. But isn't doing so also a quintessential value of the Judeo-Christian West?

I disagree with West that we could not and did not accomplish every aspect of the mission. Two or three generations of Afghan girls and women did thrive and come into their own professionally – but doing so required foreign boots on the ground. Was this worth the death of a single American Marine?

You decide. I can't.