Speakers at "Hinduphobic" Conference Have History of Anti-Israel Activism 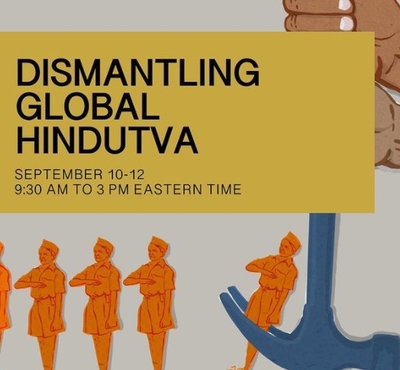 The growing ties between two democracies – Israel and India – has been a target of attacks by Islamists and their supporters.

An upcoming virtual conference scheduled for the Sept. 11 weekend offers an example of just such an adversary.

The conference, which claims co-sponsorship by departments and centers in over 45 universities, including Harvard and Princeton, has drawn condemnation from American Hindu groups as a "Hinduphobic event." An IPT investigation now finds that some of the original featured speakers also share a history of anti-Israel activism and vigorously advocate against India's ties to the Jewish state.

On Aug. 19, the Hindu American Foundation (HAF), an "educational and advocacy organization" about Hindus and Hinduism, wrote to 41 American university co-sponsors asking them to "distance themselves" from the event. Event organizers "trade on the prestige of your institution's name to host, not an academic conference, but a partisan event related to politics in India," HAF's letter to American university co-sponsors said. "The event platforms activists with extensive histories of amplifying Hinduphobic discourse even while denying the existence of Hinduphobia. Many of these activists equate the whole of Hinduism with caste bigotry and other social ills; deny the subcontinental indigeneity of Hindus and Hinduism; and support or minimize violent extremist and separatists movements and deny the resulting genocides and ethnic cleansings of Hindus."

HAF says it received an "overwhelming response," with four universities' officials – Boston College, Dalhousie University, Princeton University, and University of Massachusetts, Boston – saying "their name and logo was used in an unauthorized manner" and they asked event organizers to remove them.

But organizers kept the universities on their list of sponsors, saying specific departments and centers, not the university as a whole, were participating.

HAF sent follow up letters to the universities objecting to their apparent support for what it sees as an inherently partisan political program. It claims more than 10,000 people have signed petitions endorsing their opposition to the event.

Last week, Ohio state Sen. Niraj Antani condemned the event as "a disgusting attack on Hindus across the United States, and we must all condemn this as nothing more than racism and bigotry against Hindus. I will always stand strong against Hinduphobia." The dean of Harvard College repudiated conference organizers for "using the Harvard College/University name and shield logo without permission of Harvard University or any of its subsidiaries." The university is "in contact with the organizers to remove the Harvard College/University name and shield logo from any and all of their advertising and conference materials."

One speaker, writer-activist Meena Kandasamy, blasted Hinduism last December as "a menace to liberty, equality and fraternity. It is incompatible with democracy. Hindu Raj [rule] must be prevented at any cost."

In a poem Kandasamy disparaged Hindu deities calling the deity Rama a "di**head."

Since it is online, organizers could have held this event at any time. But they chose this weekend, the 20th anniversary of the 9/11 terror attacks perpetrated by Islamist terrorists. This decision exposes a certain callousness about both the Islamist threat and the national trauma Americans still suffer.

The event brochure shows Hindu Rashtriya Swayamsevak Sangh (RSS) figures in their customary khaki uniforms being uprooted with the claw end of a hammer. The RSS ("National Volunteer Organisation") is reported to be "the world's largest voluntary non-governmental organization whose ideology is based on selfless service to India." The organization seeks the preservation of "Hindu culture...the life-breadth of Hindusthan ['Land of the Hindus']," according to its website. The organization also has a Muslim wing.

The organization was temporarily banned after an RSS member assassinated Mahatma Gandhi in 1948. Indian secularists and Islamists continue to claim the organization is fascist.

"If someone brands the RSS as a group of Hindu 'radicals,' that will be as inaccurate as it can get," writes Rahul Roushan, CEO of the conservative news site Op-India. "Unfortunately, that's how the RSS is often branded." His interactions with RSS members showed "[m]ost of them preferred an unhurried and persuasive approach towards problem-solving."

But this alternative discourse is missing from the upcoming webinar. Kandasamy describes the Taliban as the "RSS-equivalent in Afghanistan," adding that "when it comes to "fundamentalism, inherent misogyny, brutality-they're the same."

India's ruling party, the Bhartiya Janata Party (BJP) is regarded as the political wing of the RSS.

Krishnan is equally hostile toward Israel.

During 2014 fighting triggered by Hamas rocket fire toward Israeli communities, Krishnan claimed that Hamas's "actions have been less terrorist than Israel itself." She also described "Israel's protocol from 1948 Nakba onwards is the wiping out of Palestine as a state and as a people."

There is no such protocol. Israel may have the military means, but in all the battles since its 1948 creation – what Palestinians call the Nakba – the Palestinian population has grown exponentially.

In May, as Israel tried to ward off yet more Hamas rocket fire, Krishnan called on India and the international community to "impose military embargo on Israel's apartheid regime and stop enabling Israel's brutal siege of Gaza and mass crimes against Palestinians through their support of Israel's military industry."

Her statement was posted on CPI (ML)'s masthead. The communist organization's website features Palestinian Front for the Liberation of Palestine's (PFLP) and other pro-Palestinian resistance propaganda. The PFLP is a U.S.-designated Foreign Terrorist Organization (FTO).

Other conference speakers are also staunch advocates of the anti-Israel Boycott, Divestment, and Sanctions (BDS) movement.

BDS is inherently anti-Semitic because it singles out the world's only Jewish state for treatment not imposed on other states with much worse human rights records, and because it is reminiscent of the Nazis' economic warfare against Jewish-owned companies.

In May, for instance, Krishnan interviewed Omar Barghouti, co-founder of the BDS movement, who has supported "armed resistance" against Israelis and said Palestinians will never accept the Jewish state.

Barghouti invoked India's past support for "liberation struggles, including the struggle in Palestine."

"[That] still can happen again," he said, "Hindutva...this far right ideology that has taken over [the] establishment in India will one day be defeated...just like Zionism, the racist ideology of the state of Israel will be defeated one day with all progressives standing together."

Other speakers at the event – including Anand Patwardhan, Ayesha Kidwai, and Nandini Sundar – signed petitions calling on the Indian government to rescind its recognition of Israel and sever ties with the Jewish state.

A June 15 petition for example, "demand(s) nothing less than the complete de-recognition of Israel by this and all future Indian governments as long as it is a Zionist apartheid state which denies the right of self-determination and the right of return to the Palestinian people." That includes a "complete severing and cessation of all diplomatic, political, military, economic relationship with Israeli government."

Patwardhan, a prominent documentary filmmaker, participated in a 2010 Asian aid convoy to Gaza. The convoy's objectives were to "liberate Palestine," "break the siege on the Gaza Strip," and "destroy the Israeli system of apartheid."

Kidwai, a professor of linguistics at New Delhi's Jawaharlal Nehru University (JNU), has been identified in anti-Israel petitions as "convenor" of the Indian Campaign for the Academic and Cultural Boycott of Israel (InCACBI).

An undated "Public Statement on Palestine by Concerned Indians" signed by Patwardhan, Kidwai, Sundar and others declares that "Zionist Israel is the only state in the world that is NOT a state of its own citizens but is a state of the Jewish people who everywhere have full rights denied to non-Jews in the territories controlled by Israel itself. This means that like apartheid South Africa---which the Indian government never recognized---Israel is an inherently racist and apartheid state."

It is this kind of myopic and bigoted analysis the upcoming conference promises to offer. Titled, "Dismantling Global Hindutva (DGH)," it pushes a one-sided narrative on a hotly debated topic of "Hindutva" that is open to a variety of interpretations.

India's Supreme Court has ruled the term means a "[Hindu] way of life." But critics argue it is distinct from the Hindu faith.

"Hinduism we respect as an inclusive and non-judgmental religion. Hindutva, on the other hand, is a political doctrine based on exclusion," Shashi Tharoor, a prominent leader of the opposition Indian National Congress party said in a November interview.

But Hindutva advocates who view India as a "civilizational republic," not just a post-colonial entity created in 1947 following India's independence from British rule, differ. They describe Indian secularism as "pseudo-secularism" that discriminates against the Hindu majority and seeks to promote communal harmony by conferring special rights on India's minorities, especially with respect to places of worship and educational institutions.

"Rich temples and privately funded Hindu institutions," for example, "have come to be regulated and often effectively controlled by the government, while many minority ones are exempt from various quotas and laws even while they receive subsidies from the government," Harsh Madhusudan and Rajeev Mantri write in their book, A New Idea of India. Because different religions have separate personal laws, "an Indian Muslim man can have four wives, while a Hindu man cannot (and no woman can have multiple husbands)."

The strident "Hinduphobic" and anti-Israel activism of conference speakers should give the co-sponsoring universities pause. An open discussion on Hindutva or legitimate criticism of Israeli policies is welcome, but a bigoted, one–sided conference on "dismantling Hindutva" isn't a search for truth.

"This acceptance of diversity, even when this diversity has contradictory or contested elements, is part of the unity of Hinduism," writes HAF's Mat McDermott. "What we are doing is adding more voices to the discussion, adding pro-Hindu voices to what seems to be a conference built on anti-Hindu sentiment and bias."