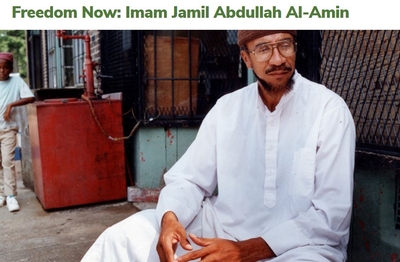 "Violence is a part of America's culture. It is as American as cherry pie."

"If America don't come around, we're going to burn America down." These are the words of a young African American man known as H. Rap Brown. What began as a life involved in the nonviolent civil rights movement spiraled downward to violent crime and murder.

The Islamic Circle of North America (ICNA) would have you think otherwise. Despite overwhelming evidence to the contrary, ICNA's Council for Social Justice is repackaging the story of H. Rap Brown, aka Jamil Abdullah Al-Amin, as a persecuted political prisoner set up by a corrupt justice system.

Nothing could be further from the truth.

Al-Amin is serving a life sentence for the 2000 murder of a Fulton County, Ga. sheriff's deputy and the wounding of his partner. Al-Amin opened fire on Ricky Kinchen and Aldranon English, both black, as they were trying to arrest Al-Amin for theft and impersonating a law enforcement officer. Later, he fired on U.S. Marshals who tracked him down in rural Alabama.

But those leaders never wavered in their commitment to nonviolence. Al-Amin disavowed the philosophy entirely in his words and deeds, first leaving the Student Nonviolent Coordinating Committee in 1968 to join the Black Panther Party.

"If you're asking me if I ever considered him a hero or a valuable contributor to the civil rights movement, my answer is definitely no," Kinchen's brother David said before Al-Amin's trial. "My brother was cut down in the prime of his life ... It's something that I don't think my family will ever get over."

Al-Amin's trajectory to a life a violent crime rapidly increased after he left the Black Panther Party.

He was arrested in 1971 for armed robbery in New York City and sentenced to prison. He converted to Islam while in Attica under the discipleship of another inmate involved in the Dar ul Islam movement.

Founded in the early 1960s in a Brooklyn mosque, Dar ul Islam was an alliance between Orthodox African American Muslim and Middle Eastern clergy. Its theology was heavily influenced by Abu Ala al-Mawdudi, an Islamist and founder of Jamaat-e-Islami (JI). The JI's goal, as stated by Mawdudi, was unambiguous: "the objective of the Islamic 'Jihad' is to eliminate the rule of an un-Islamic system and establish in its stead (sic) an Islamic system of state rule."

After his 1976 release for his armed robbery conviction, Al-Amin settled in Atlanta and became the imam of a local mosque. He went on to become the national leader of the Dar ul Islam movement.

One of Al-Amin's protégés, also a former convict, was Luqman Abdullah. Abdullah went on to become the leader of the Dar ul Islam movement in Detroit. He also became the founder (board member) of Muslim Alliance of North America (MANA). Abdullah was involved in a fundraiser for Jamil Al-Amin at the All Dulles Area Muslim Society, or ADAMS Center, in 2008. There he told the audience that Al-Amin was a political prisoner.

In 2009, a federal grand jury indicted Abdullah for numerous federal firearms violations and thefts. Abdullah opened fire on law enforcement officers who tried to arrest him, and he was killed when they returned fire.

Abdullah preached "offensive jihad, rather than a defensive jihad," said an affidavit filed before he was killed. He vowed never to surrender peacefully if police came for him, telling followers in a 2004 sermon, "Police so what, police die too, Feds die too...do not carry a pistol if you're going to give it up to the police, you give them a bullet!"

ICNA called for an independent investigation into the FBI's handling of the Abdullah case and demanded that prosecutors ignore his religious affiliation, claiming it "will only serve to promote an increase in existing anti-Muslim stereotyping and bias in our society."

Andrew Arena, the Special Agent in Charge of the Detroit FBI office during the Abdullah investigation, described the Dar ul Islam movement as, "a very hybrid radical ideology" that mainstream Muslims "would not recognize."

Dar ul Islam has a long history of violence against police. In 1973, four Dar ul Islam members stormed into a New York sporting goods store to steal firearms. Police arrived before they could escape, and the perpetrators took a dozen people hostage. The siege lasted two days before the hostages were released. During the gun battle, one NYPD officer, Stephen Gilroy was killed, and another, Frank Carpentier, was wounded.

Jamil Al-Amin and his actions were the direct product of radical Islamic teachings that call for violent jihad. It is no wonder that al-Qaida has also called for his release.

This is not ICNA's first foray into championing suspect causes, claiming individuals were set up or unjustly incarcerated.

ICNA believes that convicted terrorists such as Jihad Jane, Daniel Boyd, Aafia Siddiqui – better known as "Lady al-Qaida" – the Lackawanna Six, and the Newburgh Four, along with Jamil Al-Amin, were railroaded by the Justice Department and overzealous police.

Attempting to re-write history seems to be ICNA's forte. This is both deceptive and dangerous.

Thankfully, the U.S. Supreme Court has turned down Al-Amin's appeal of his conviction for murdering Deputy Ricky Kinchen. Jamil Al-Amin is a cold blooded killer, not the civil rights icon ICNA would have us believe.

National Peace Officers Memorial Day was marked last month. Initiated by President Kennedy in 1962, it honors those law enforcement officers who were killed or wounded in the line of duty.