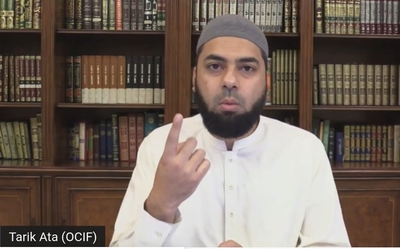 A Southern California imam called Israelis "child killers" and urged Muslims to "sacrifice whatever resources we can in defense of that land," in a talk live-streamed last Thursday on YouTube.

Sheikh Tarik Ata's remarks came after Jews were targeted in at least two antisemitic attacks in Los Angeles. The video remains available on the Orange County Islamic Foundation's YouTube channel, called ShuraTV. Ata is a Foundation board member. He also serves on the Islamic Shura Council of Southern California's board. The Council includes 74 Southern California mosques and Islamist organizations, including local chapters of the Council on American-Islamic Relations (CAIR), Muslim Students Association (MSA) and the Muslim Public Affairs Council (MPAC).

"And so we see our brothers and sisters in Jerusalem defending [the Al Aqsa Mosque]," he said in the live-stream. "... They're putting their life on the line, men and women. Standing, shielding [the Al Aqsa Mosque] from that apartheid regime. The Israeli soldiers. The IDF. The child killers. And they're willing to sacrifice their blood."

Ata claimed he was "not calling people to go and sacrifice themselves, spill their blood to attack anyone," but he repeatedly demonized Israelis and their supporters, while offering some next-level fantasy talk painting Muslims as the only people who treat Jews well.

Ata never mentioned Hamas, nor uttered anything about the terrorist group and its cohorts firing 4,000 rockets toward Israeli civilian communities since May 10. Most of those rockets, as well as the launchers and other components of the Hamas arsenal, are stored or launched in neighborhoods, apartment buildings, schools, office buildings – including those where journalists work – placing every civilian in Gaza, including children, directly in harm's way. Israel's choice is either to retaliate and risk civilian casualties, or let the rocket fire continue, placing its own civilians in danger.

Using civilians as human shields is a war crime under the Geneva Conventions.

The wisdom of firing at a better armed foe, knowing it would draw retaliatory strikes to take out those launchers, wasn't discussed by Ata, either. He made no mention of the estimated 20 percent of Hamas rockets that fell short of its targets, causing an unknown number of the child casualties in Gaza.

His language mirrors what attackers shouted when hunting down Jewish diners in Los Angeles last week.

"At one point before the attack, which later escalated to kicking and punching, a person can be heard yelling, 'Israel kills children!'," the Los Angeles Times reported. A witness said the attackers also shouted "Death to Jews" and "Free Palestine."

In a separate incident Monday night, a man walking home from his synagogue was chased by men in two cars waving Palestinian flags and shouting Allahu Akhbar, Fox News reported.

He also painted a patently false image of Jews finding protectors among Muslims, both historically and today.

"There's only when the Muslims entered that land did you find Muslims, Jews and Christians with equal populations, populations equal in size," Ata said. "Living there peacefully, each religion. Each member of that religion will go to their holy sites, worship in peace and tranquility without worry of oppression, and aggression from a tyrannical force. Only Muslims have done this."

This is manifestly false. Israel agreed to allow the mosque to remain in the hands of the Islamic Waqf, an Islamic trust, run by Palestinian and Jordanian clerics. While there have been tensions and clashes there, it has remained open for prayer.

The Western Wall, revered by Jews worldwide as the only remaining part of the second Temple, was barred to Jews from 1948-67, when Jordan controlled East Jerusalem. The area in front of the Western Wall was used as a garbage dump to humiliate Jews.

Jews were treated relatively well for some major periods under Muslim rule. But they were officially designated as second-class citizens, subject to a dhimmi tax.

"Because again, history shows, history speaks," he said. "Muslims, never oppressed Jews. Muslims never attacked Jews. Muslims were never uncomfortable with Jews. And it's not just history that speaks. Current time speak. You know, there are Jews in Morocco, Jews in Yemen, Jews in Iraq. and Jews in Iran. Do you ever hear about Muslims oppressing them? You ever hear about Muslims attacking them? Not at all."

This is pure historical fiction. According to a World Jewish Congress study, Jews living in Muslim countries were subject to murderous pogroms during the 20th century, along with massive wholesale confiscation of their properties, arbitrary arrests and expulsion. The Jewish population in Muslim-majority states like Iraq, Iran and Yemen dwindled from more than 1 million people in 1948 to less than 5,000 by 2012 because of massive Islamist antisemitism.

It is so safe and loving for Jews in Yemen that the Israeli government launched a secret operation in 2016 to sneak some of the few remaining Jews out of the country. A CNN report described Yemen as "increasingly hostile to the small Jewish population."

It is true that you rarely hear about Jews in Iraq being attacked. There are four, literally, four Jews left in the country. During World War II, writes historian Edwin Black, "Iraq had distinguished itself throughout the Arab world as a top Nazi ally."

He graphically describes a 1941 Nazi-inspired pogrom in Iraq:

Ata, therefore, is ignorant of history or is purposely spreading false information.

Ata's emphasis on "child killers" not only disregards the role Hamas plays in placing children at risk, it also ignores the extraordinary effort the IDF makes to avoid civilian casualties in the first place. Before a building is targeted, warning shots are fired to give people time to get out. Often, building owners and managers are called directly to give them a chance to get the people to safety.

It doesn't always work, as this video shown by Australia's Sky News shows.

"We want to die," said a Palestinian after being warned this week about an impending bombing. "If the children need to die, then they'll die. This is how we reveal your cruelty."

It sure would be good if some religious leader spoke to that guy about the value of children's lives.