Since 2019, Iran helped establish 36 local militias throughout southern Syria, giving it a new means of influence in the area, and future attack options against Israel, a new report by an Israeli research organization finds.

The militias are made up of local Syrian Sunnis and Druze, said the Alma Research and Education Center, which is located in Northern Israel's Galilee region, and is dedicated to researching the security challenges on Israel's northern borders.

Militia members, it said, are acting as paid mercenaries of the radical Shi'ite Iranian-led axis.

The scope of the militia deployment has not been publicly known until now, Maj. (res.) Tal Beeri, director of Alma's research department, told the Investigative Project on Terrorism. The militias' end goal is to establish "Iranian sovereignty" in southern Syria, he said.

Beeri, who spent 20 years as an IDF intelligence officer specializing in Lebanon and Syria, said the militias are deployed from the triangle of borders region, in which the Syrian, Israeli, and Jordanian borders intersect in the south, to the town of Khader further north, and up to the Dara-Damascus highway region. 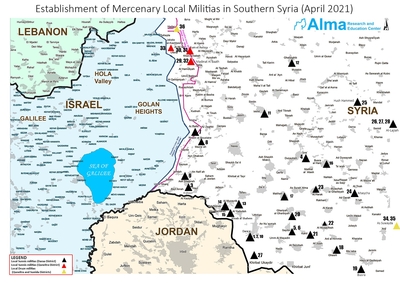 "Usually, when we talk about militias in Syria, we are referring to Shi'ite militias brought in by Iran from Iraq, Afghanistan, and Pakistan. But it turns out that this is not the main force operated by Iran in southern Syria. Rather, it is local militias made up of local residents, who Iran is using as a branch of its radical axis," Beeri said.

The mostly Sunni and minority Druze militias form a key part of Iran's attempt to consolidate its presence in Syria, the report found, and joins Iranian efforts to gain a foothold in the area through a civilian infrastructure (social, religious, and educational bodies), and Hizballah's extensive activities there.

"The militias are active in all southern Syria provinces – Quneitra, Dara'a, and Sweida," said Beeri. "Their loyalty is mostly bought with money, not ideology. The need for economic survival has created this dependence. Many of these people belong to the 'reconciliation group'; former opposition fighters against the Assad regime, who also fought against the Shi'ite axis. Once Assad reconquered the south, they reached agreements with the regime. Today, we see the same opposition elements who fought against Assad and pro-Iranian elements become organic components in the Shi'ite radical axis."

There are about 5,000 militia personnel, each paid approximately $100 per month, though more exact estimates of their size are not accessible, Beeri said.

"They have no ideology. Some of them are former members of the Jaish Khaled Ibn Walid group – the ISIS branch in southern Syria," he noted. "They are the clearest examples of mercenaries whose loyalty has been bought off."

In addition, a fair number of the militia members or their family members received Israeli medical assistance during the Syrian civil war years, via the IDF's Operation Good Neighbor, which ran until 2018.

It is doubtful whether that past will influence their conduct today, Beeri said.

"Their first mission is to maintain a presence and to deter the local population from rising up against Assad and his allies. The message is, 'we are on the ground and you, the local population, can't do what you want,'" said Beeri. "The fact that these are locals, each operating in their own location, is an advantage for them. The local militia is in charge, and this is a particularly important principle in southern Syria."

The second mission is to assist the Iranian-Shi'ite axis's goal of creating a civilian support base in the area, as well as securing institutions that serve this objective. In addition, the militias are tasked with recruiting additional operatives.

When senior members of the pro-Iranian axis arrive in the area, the militias act as their security detail.

In addition, Beeri said, the militias pay a central part in drug smuggling by Hizballah and other Iran-backed groups for profit. This includes amphetamines, hashish, and crystal meth. Some of the narcotics end up in Jordan, and from there are smuggled to Israel via the Palestinian Authority, while others go to Arab Gulf states.

The militias can link up with other armed groups that act under Hizballah's "Golan File" – Hizballah operatives who recruit Syrian locals for the express purpose of forming terror attack cells against Israel. They can also be used by Hizballah's 'Southern Command,' comprised of veteran Hizballah members embedded into the Assad regime's army in southern Syria.

The militias can also cooperate with Unit 840 of the Iranian overseas Quds Force. The unit's objective is to carry out terror attacks, such as the planting of mines on the border of Syria and the southern Golan Heights last year.

"The militia members can be 'borrowed' due to their advantage in knowing the area. They can be activated in a compartmentalized manner, and receive orders to take part in an attack plan," said Beeri.

"The threat the militias pose to Israel is tactical. It's at the level of planting bombs, or firing an RPG," he added. "It is unlikely that they will conduct independent action against Israel. If they act, it will be because of directives from the Iranian axis."

The militias are mostly armed with assault rifles, RPG launchers, mortar launchers, and small artillery guns. They may also have access to guided anti-tank missiles.

In addition, the militias act in support of the Syrian Army's 4th Division, which is under the command of President Assad's brother, Maher Assad, and which is stationed in Dara to deal with instability there.

The directorate is the main intelligence agency active in the Dara'a province of southern Syria, and it is heavily influenced by the Iranian axis, he added.

"When one looks at the general community, we can see that in almost every community in southern Syria, there is the presence of a branch of the radical Iranian axis. It can be in the form of a mercenary militia, a Shi'ite foreign militia, or a Hizballah unit. The deployment is widespread. We are seeing a copying of the Hizballah model from Lebanon to southern Syria, in terms of civilian and military consolidation. This includes the use of tactical human shielding, a central technique that we also see used in Lebanon," Beeri stated.

"An entire military presence is going under civilian cover. It is a disturbing event," he added. "We believe that as time goes by, the activity of UNDOF (the United Nations Disengagement Observer Force, deployed in south Syria to ensure that Israeli and Syrian forces remain disengaged), will see its activities restricted, much like UNIFIL in southern Lebanon."

Russian military police also are present in the area in a minor way, said Beeri, and Russia has some influence on an independent militia that has fought against the Shi'ite axis on occasion. In addition, the Syrian Arab Army has a formation called the Fifth Corps which acts as a Russian proxy.

"There have been some clashes between militias that are not part of the Shi'ite axis and the 4th Division, as well as with the Air Force Intelligence Directorate," Beeri said.

As far as Israel is concerned, while the local militias are not "the enemy" at this time, they are part of the fabric of the radical Iranian axis, and they would enter Israel's sights as soon as any of them show signs of hostile intent, Beeri cautioned.

"They are part of the takeover mechanism that is designed to establish 'Iranian sovereignty' in southern Syria," he said.