The Perils of NonViolent Islamism

Correction: This article has been updated to reflect the differences between the Quran's "Meccan" and "Medinan" verses. 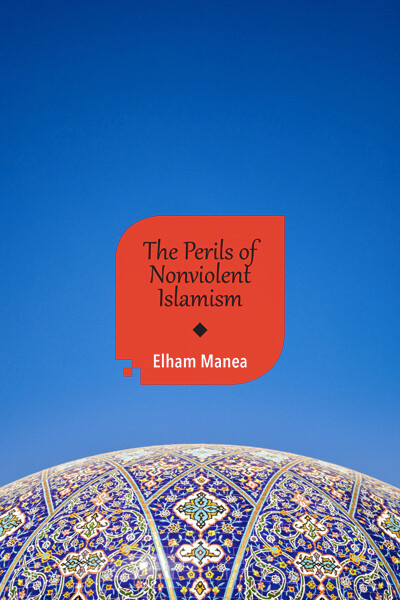 As the Egyptian-born child of a Yemeni diplomat, Elham Manea and her family traveled widely. But their move from Morocco to Yemen, when Elham was a young teenager, stands out. She compares it to time travel, leaving a free and modern life for a place where women are veiled and public life is gender segregated. She was told that art, music, poetry, and philosophy were forbidden, and that her new, true family of "sisters" and "brothers" were other Muslims who believed all this.

She was taught to "hate," Jews in particular, and that it was right to deceive infidels. When she was told that a husband is God to his wife, that she would have to sacrifice her blood family in favor of other true believers, she backed away.

She has been backing away ever since.

In The Perils of NonViolent Islamism, her fourth book in English, the University of Zurich political scientist, author, activist, and consultant offers a warning to the West.

In Manea's view, "nonviolent Islamism," is the basic building block that leads to violent jihad. And our misreading of that reality can lead to real harm.

If we continue "cancelling" politically incorrect ideas and speech, continue "vilifying dissent," and "insisting upon the infinite guilt of the West" then, as Russell A. Berman writes in the foreword to this work, "we should expect the real-world consequences of this ideology soon to become clearer and rougher." Manea believes that repressing dissent can easily turn into repressive practices. "Cancel culture" may indeed be our "Islamism."

Nonviolent Islamism's insidious nature is one of Manea's most important points. Westerners have been hopelessly gullible in their choice of "smiling and patient" Saudi-funded Muslim Brotherhood/Salafi representatives as their go-to experts on both Islam and Muslims.

"One cannot combat an ideology and fundamentalism by working with the very groups that promote that ideology," she writes. Further, Western cultural relativism and doctrines of "multiculturalism" has served us and freedom-loving Muslims very, very poorly.

This battle, she writes, is "the global challenge of the 21st century."

Both hardcore and softcore Islamism must be "challenged and confronted ... we need to dismantle the structures and the system that spread(s) this ideology and its radicalized form of Islam." That means we must adopt significant changes in Islamic schools, mosques, youth groups, and camps; we must retrain paid imams who work in the prison system.

"Not only do we need to fight criminal organizations such as ISIS and al-Qaeda. We must also deal with the nonviolent form of Islamism: the ideology and its fundamentalist reading of Islam... security measures... alone are futile. They do not solve the problem. They do not tackle its roots or structure."

Manea insists that Western governments must "fight them as you fight your own fundamentalists, fascists, and racist groups."

Following in Investigative Project on Terrorism Executive Director Steve Emerson's footsteps, Manea's second important point is her description throughout the book of how the Muslim Brotherhood is structured and organized globally so that it can indoctrinate successive generations into "radicalized Islam" or hate ideology, the kind that leads to funding and perpetrating violent jihad; gender segregation; closed communities especially in the West; the veiling of women, child marriage; infidel hatred, especially Jew-hatred, etc. She calls for defunding all such groups. "Stop mainstreaming (them). Hold them accountable."

Manea understands and criticizes how Islamists operate in the West. What begins as "reasonable requests for religious accommodations" soon entails the following:

"Muslim pupils and students need to eat halal food in the cafeteria. They need a prayer room in the school. They want to leave classes during the times of prayer throughout the day and on Fridays. They organize ritual foot washings in the bathrooms. For swimming classes, the genders must be segregated and girls must wear a burkini. School trips are frowned upon or reduced... to just one to ensure girls would participate. Classes should also be gender segregated. Muslim pupils are not allowed to play with non-Muslim pupils in the playground and vice versa."

Her third important point is that Muslims themselves are on the front lines of this battle against "Islamist" fascism. Muslim-on-Muslim violence and warfare yields a far higher body count than does Muslim-on-infidel warfare. Muslims are blowing up Muslim civilians, including women, children, and the elderly in Afghanistan, Pakistan, Syria, Iraq, Nigeria, and in other Muslim-majority countries.

Muslims are the first victims—and they are also the bravest of dissenters who cannot understand why Westerners, who already live in greater freedom, do not support heroic Muslim struggles against totalitarian fundamentalism in Muslim-majority countries.

For example, the 2017 Marches of Muslim Imams against Terrorism in Cologne, Germany and in Paris each attracted only 100 people. Muslims Manea spoke with said they had their jobs, and even their lives, threatened if they attended.

She provides examples of people who paid a price for challenging fundamentalist interpretations of the Quran. Sheikh Mohammad Abdulla Nasr, a religious scholar at Egypt's Al-Azhar, "spent five years in prison for questioning the rationale behind following the Sunna ... which was written two hundred years after the Prophet Mohammed's death." Mohamed Cheikh Ould Mkhatir, a Mauritanian blogger, originally faced execution and spent five years in prison for "blasphemy" for challenging the Quranic basis for slavery, a practice which remains legal in Mauritania. Only an international campaign may have stopped his execution.

Ironically, according to Manea, Muslim scholars are blaming Islamic texts and fundamentalist Muslim indoctrination and practices for jihad even as Westerners are berating and blaming themselves for colonialism and white racism as having led to violent jihad. Such Westerners do not understand that Muslim leaders in countries like Iran and Saudi Arabia also perpetrated these practices as well as practiced both religious and gender apartheid.

Manea is now adding her voice to those of us, like Ibn Warraq, Bat Ye'or, Zeyno Baran and Douglas Murray, who have been challenging Islamism for years only to be ignored or defamed as "racist Islamophobes."

Most of these voices are either apostates, converts, secular Muslims, or they are Jews or Christians. Although Manea happily quotes atheists Richard Dawkins and Sam Harris, what makes her unique is that, like Zuhdi Jasser and my dear friend Seyran Ates, Manea is not a secularist. She is holding onto the possibility that Islam as a religion can and must be reformed. In her view, the way to do so is to follow the "peaceful" Meccan verses of the Quran, and re-interpret or pay no mind to the "war-like" Medinan verses.

Manea personally remembers a far more tolerant Muslim society in Morocco, Egypt, and Yemen, one in which women were not veiled or segregated. She writes about a diversity among Muslims, both in her lifetime and in times gone by, which she misses and longs to see again.

Manea adds to the conversation by giving us recent examples of how and why certain European governments have courted "the Muslim (Islamist) vote": In the 1960s, Belgium's king needed cheap oil, and in return, allowed for Saudi-funded mosque-building and imam-training. Sweden's Social Democrats lost elections, and their way back to power relied on a Muslim voting bloc, especially immigrants, in exchange for protecting a segregated life—and in the name of "multicultural progress."

Manea, who has written about sharia law and women, has clarified her position on the Islamic veil. Once, she did not know how to reconcile freedom of religion with bans against it. Now, she is absolutely clear that it is the sign and symbol of "political Islam." How one weans indoctrinated girls from wearing the hijab or niqab is an open question. The fact that America's "Women's March" romanticized the veil as a form of resistance to racism was most disheartening to Manea—to me, too.

In 2007, I participated in the Secular Islam Summit in St. Petersburg, Fla. It was organized by Austin Dacey and Ibn Warraq; I had the honor of chairing the opening panel with participant Tawfik Hamid, a former member of the Muslim Brotherhood.

The summit's declaration rejects Sharia courts, opposes penalties for blasphemy or apostasy; seeks an end to female genital mutilation, honor killing, and child marriage; and envisions public discussions without coercion or intimidation. It states in part:

"We insist upon the separation of religion from state and the observance of universal human rights.

We find traditions of liberty, rationality, and tolerance in the rich histories of pre-Islamic and Islamic societies. These values do not belong to the West or the East; they are the common moral heritage of humankind.

We see no colonialism, racism, or so-called "Islamophobia" in submitting Islamic practices to criticism or condemnation when they violate human reason or rights."

Based on her book, Manea seems to agree with this declaration. Perhaps it is time for someone just like her to call for another gathering and to generate a new declaration to be signed by Muslims who want a religious reformation of Islam; who believe this can and must be done; and that it can only be done from within, by Muslims themselves, who want a spiritual life, who do not want to break entirely with whatever they prize in religion, but who do want to denounce fundamentalism, totalitarianism, infidel hatred, Muslim supremacism, Islamic racism, misogyny, etc.

Secularist Ayaan Hirsi Ali endorsed The Perils of NonViolent Islamism as "the book that had to be written on political Islam... [and] a stirring wake-up call to policymakers on what's really at stake in this conflict." In 2015, Hirsi Ali called for an Islamic "reformation." She wanted to abolish sharia law and "repudiate and nullify" certain precepts entirely. Hirsi Ali accepted the fact that most Muslims will not leave Islam entirely and that women's rights, minority rights, and the separation of religion and state may only come about through a religious reformation.

Manea suggests that the more peaceful, less hateful Meccan sura be relied upon for such a reformation; the later more hostile and hateful Medinan sura must themselves be abrogated or re-interpreted.

I asked my good friend and comrade-in-arms, Ibn Warraq, what he thinks about dividing the Quran in half and keeping only the "peaceful" Meccan sura, as Manea suggests. "I do not accept the Islamic version of events and cannot take this suggestion seriously," he said. "There is no such thing as the Meccan vs the Medinan sura."

I am a religious Jew, albeit a very imperfect one. I would not want to be totally parted from a religious life, socially, ritually, but more important, intellectually. I would like to see someone like Ibn Warraq and Hirsi Ali working together with Manea to fight what Manea has, correctly, called "the greatest battle of the 21st century."

Manea has written a moving and persuasive book. It is also a brave and informative work, one which deserves a serious readership.

Phyllis Chesler is an Emerita Professor of Psychology and Women's Studies at the City University of New York (CUNY), and the author of 20 books, including Women and Madness (1972), and A Family Conspiracy: Honor Killings. (2018), She is a Senior IPT Fellow, and a Fellow at MEF and ISGAP.