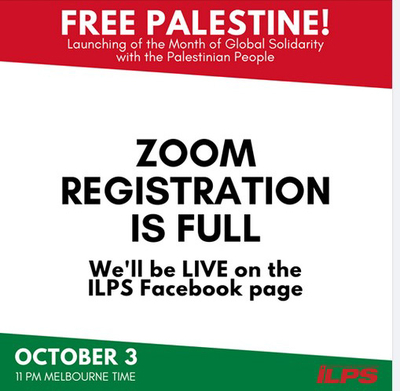 After three social media platforms pulled the plug on Popular Front for the Liberation of Palestine PFLP terrorist Leila Khaled's online speech last month at San Francisco State University, a separate speech last weekend gave her a venue to say everything she had been prevented from voicing the week before.

She repeatedly encouraged "armed struggle" against Israel, challenging its right to exist and calling for its destruction.

"And of course, this means that we have to be determined to struggle, including armed struggle," she told an audience on Zoom and Facebook under the auspices of Australia-based International League of Peoples' Struggle. She pointed to the United Nations charter, which she said gives "people under oppression ... the right to resist by all means, including armed struggle."

Khaled's words carry weight. She's a sought-after speaker because of her role in two PFLP hijackings targeting Israelis in 1969 and 1970. She has been the subject of a laudatory film and book casting her as an icon.

"We have used all means of struggle, and we are still determined to continue using all means of struggle, including armed struggle," she said. "Whoever would tell us that this is not your right, I will tell them, 'go back to history. Go back to history and go back to the United Nations charter.' The international community recognize that people under oppression have the right to resist."

"This is the history of our people," she said. "It's not we are the first to struggle or to hold arms. Our people held in many years before us. And still, now we see children going out, stabbing settlers, soldiers or using the cars. This is also resistance." 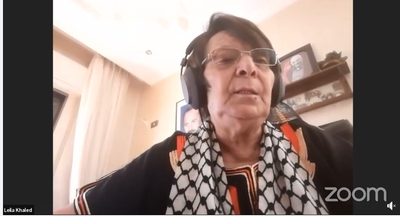 Khaled was scheduled to appear Sept. 23 in a San Francisco State online open classroom hosted by the rabidly anti-Israel Arab and Muslim Ethnicities and Diasporas Studies, together with Women and Gender Studies. 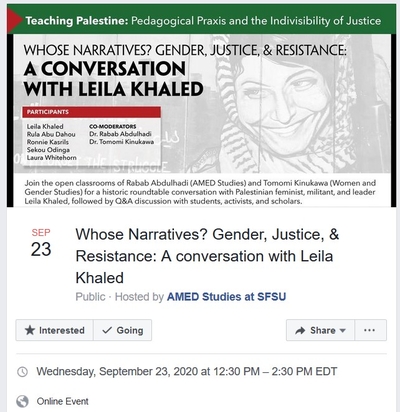 In announcing the upcoming open classroom, Rabab Abdulhadi, an SFSU Professor who has been embroiled in numerous lawsuits and anti-Zionist campaigns, said that she "wanted to grow up to become another Leila Khaled." 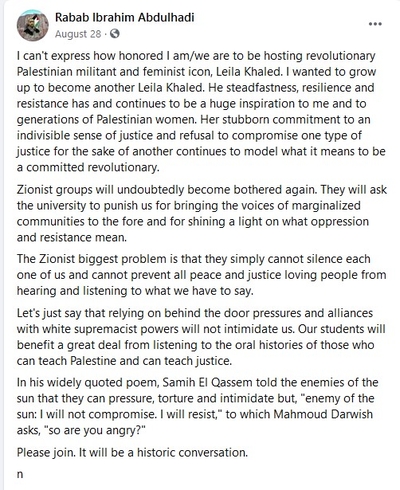 "We really idolize somebody like Leila Khaled, somebody who actually stands up for herself, speaks for herself, actually goes to a plane and hijacks it," Abdulhadi told the Bay Area newspaper Golden Gate Express.

Jewish and pro-Israel groups responded with a campaign to deprive Khaled an online venue. It included a Sept. 22 rally at Zoom headquarters.

Abdulhadi fought to save the event, posting a letter to SFSU Provost Jennifer Summit complaining that "SFSU and CSU are obligated to defend us against the vilification and smearing by an Israel lobby that is troubled by and seeks to silence Palestinian narratives and scholarship, teaching and advocacy for justice in/for Palestine."

On Sept. 22, Zoom issued a statement saying it would not carry Khaled's talk.

"Zoom is committed to supporting the open exchange of ideas and conversations, subject to certain limitations contained in our Terms of Service, including those related to user compliance with applicable U.S. export control, sanctions, and anti-terrorism laws," the statement read. "In light of the speaker's reported affiliation or membership in a U.S. designated foreign terrorist organization, and SFSU's inability to confirm otherwise, we determined the meeting is in violation of Zoom's Terms of Service and told SFSU they may not use Zoom for this particular event."

Remarkably, YouTube and Facebook killed the feed 20 minutes into the program. Although Khaled had appeared, she had not yet spoken.

"This video has been removed for violating YouTube's Terms of Service," a message on the YouTube page read.

Anti-Israel groups expressed outrage. The anti-Zionist Jewish Voice for Peace (JVP), which promotes a universal academic and business boycott of Israel, called the cancellation "an extreme example of a well-documented and deeply troubling pattern of repression against and silencing of Palestinian scholarship and advocacy, both in the academy and on social media platforms." University of California, Berkeley Prof. Hatem Bazian posted, "Censoring Palestinians has no limits!" Comedian Amer Zahr posted a photo of a smiling Leila Khaled with her kafiyeh and rifle in hand, with the comment, "Because I feel like it ..." 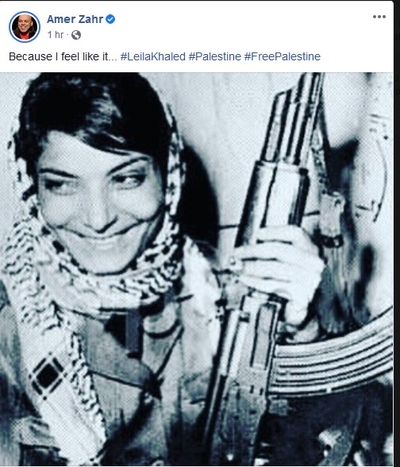 Abdulhadi was not pleased. "YouTube shut us down. If SFSU Administration has stood by us and if SFSU President did not join the Zionist chorus, we would not be here today," she complained.

And yet, apparently unbeknownst to most, Khaled spoke a week later. The International League of Peoples' Struggle featured Khaled in launching a month of solidarity with Palestine.

Announcements of the Oct. 3 event were posted on Facebook, and Zoom, but due to participant overflow, it was then broadcast on Facebook live.

In addition to her incitement to armed resistance, Khaled refuses to accept Israel's right to exist, states that Israelis are "playing the same role of Hitler" and declares that "Israel is not a state to live. Israel is a state to be demolished."

She objected to a map used in an earlier presentation that included Israel.

When asked what "internationalists" can do to help, she accused the "Zionists" of teaching other governments to oppress their people.

"Also to expose the enemy. It's not only Israel. It's the Zionist movement. In your country there are Zionists working with the governors, guiding them how to oppress their people. Because they in different countries are using the Israeli police. They teach that the police in this country, on that country, how to suppress the people. I'm very sure that all the documents that we have stores that this is one of the main tools is that done by the Israelis and the Zionists in the world."

The talk does not appear to have received any attention. Video remained available on YouTube and Facebook as of Oct. 9.

If those companies found her SFSU talk to be in violation of their policies, they need to explain why Saturday's talk, with its calls to destroy an existing country, is acceptable.