Hizballah Played with the Lives of Lebanese People 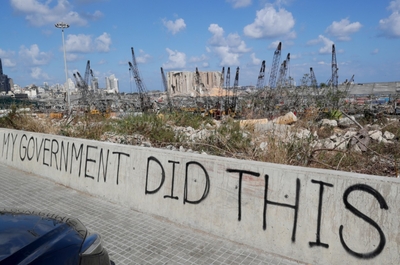 The dramatic, massive explosions at Beirut's port Aug. 4 damaged 50 percent of the city's buildings, killing nearly 180 people and injuring 6,000 more. Within a few minutes of the blasts, Iran, Hizballah and Israel said they had nothing to do with the explosion. It certainly did not fit Israel's modus operandi, which rarely conducts operations in broad daylight. Hizballah and Iran, in fact, did not blame Israel for the explosions, which is extremely telling and sounds like an acknowledgement of responsibility.

The official version put forth by the Lebanese government that is very close to the terror group Hizballah, is that the explosion originated from a fire at the port that ignited fireworks and then the 2,750 tons of ammonium nitrate stored in sacks there since 2014.

In June 2014, Shafik Merhi, then head of the Lebanese Customs Authority, wrote to Lebanese officials under the heading "urgent matters," asking for help to secure the explosives that had come on board a leaky Russian-leased cargo ship bound for Mozambique. Merhi then reportedly sent five more letters between 2014 and 2017 pleading for help. Furthermore, a Lebanese colonel who died under suspicious circumstances in 2017 had called for the removal of the ammonium nitrate: "The cargo is highly dangerous and constitutes a threat to public safety."

The captain of the boat that carried the ammonium nitrate to Beirut in 2013 said he felt "sorry for the people (killed or injured in the blast). But local authorities, the Lebanese, should be punished. They did not care about the cargo at all."

He is right about that. Newly released documents suggest multiple government agencies in Lebanon, including the Ministry of Justice, were informed that ammonium nitrate was being stored at a port warehouse. Even more telling is the direct responsibility of both the Lebanese prime minister and president, who were warned last month by Lebanese security officials that 2,750 tons of ammonium nitrate stored in the port of Beirut posed a security risk and could destroy the capital if it exploded.

Why would the Lebanese authorities keep such a highly dangerous substance in the port of Beirut, if it were not for Hizballah to use it at some point in time? Despite the New York Times making a laughable claim that Hizballah is known to be careful with its weapons caches, citing "diplomats," the opposite is true. In fact, like all terror groups, having critical facilities in very populated areas, using civilians as shields to avoid bombing, is a hallmark of Hizballah. Having such a dangerous compound sitting in downtown Beirut is part of Hizballah's DNA.

It has been alleged that Hizballah was saving the ammonium nitrate stockpile stored in the port of Beirut to use against Israel in a "Third Lebanon War." Two sources cited by Al-Arabiya said that the ammonium nitrate was being slowly siphoned off by Hizballah for military purposes. One source close to Hizballah actually said the product was being used for missiles and rocket warheads sent by Iran to Lebanon.

Not only is Hizballah the only actor in Lebanon interested in ammonium nitrate but also it is an open secret that the Shia terror group controls both the airport and the port in Beirut. A source close to Hizballah confirmed that fact to Al-Arabiya: "Certain sections of the port and the airport are used for smuggling military shipments to Hizballah."

While Hizballah claims innocence, it has found an unlikely ally in the person of French President Emmanuel Macron. While in Beirut two days after the blasts, Macron met with the head of the Hizballah bloc, Mohamed Raad, despite the United States adding Raad to its list of people sanctioned for terrorist ties. This reportedly marked the first meeting between a French president and a Hizballah representative. The next day, Macron seemed to defend Hizballah's interests when he reportedly told President Donald Trump that sanctions against Hizballah would be counter-productive.

This development is all the more disgusting in that prior to the Islamic State attacks in Paris in 2015, Hizballah was the terror organization that had killed the highest number of French nationals in the world. Israeli Prime Minister Benjamin Netanyahu reached out to Macron on Aug. 11, calling for Hizballah's missiles and explosive materials to be removed from populated areas to prevent an accident similar to the Aug. 4 Beirut explosion.

What remains the most critical aspect for Hizballah is its public image and popularity. That's why the Shia terrorist organization quickly and vehemently denied any connection to the Beirut explosion, to avoid any major popular backlash. However, this strategy hasn't worked, and the devastating episode unleashed public anger at Hizballah. The Iranian proxy has now become a target of public resistance, particularly from a new generation, including within its own Shia community. Demonstrations in the past few days have featured chants calling Hizballah a terrorist organization. Some protesters strung up effigies of Nasrallah.

A generation of corrupt and incompetent politicians has been complicit in letting Hizballah take over Lebanon. It is therefore smart for the Trump administration to prepare to impose anticorruption sanctions against prominent Lebanese politicians and businessmen in an effort to weaken Hizballah's influence. For too long, Hizballah has hijacked the beautiful country of Lebanon and its incredible people. Ignoring this reality after the terrible human and financial toll of the explosions would only lead to more deaths and misery.

Olivier Guitta is the managing director of GlobalStrat, a security and geopolitical risk consulting company for companies and governments. Olivier tweets @OlivierGuitta.