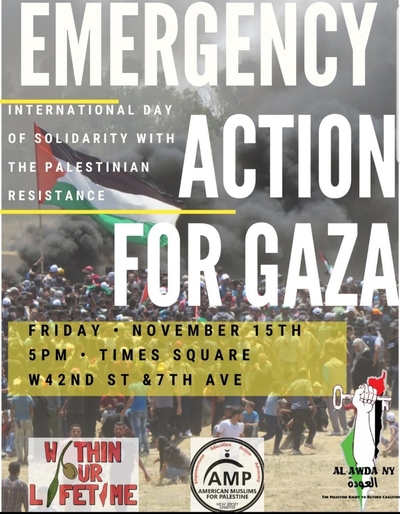 Read our story about the rally and see video clips here.

Chants: (**These are all repeated multiple times throughout the rally)

"Resistance is justified when people are occupied!"

"Gaza, Gaza, you will see ,Palestine will be free"

"There is only one solution, intifada revolution!"

"Settler, settler go back home, Palestine is ours alone"

"Stop the killing, stop the hate, Israel is a terrorist state"

"It is right to rebel, Israel go to Hell!"

"Not another nickel, not another dime, no more money for Israel's crimes"

"Netanyahu Trump you will see, Palestine will be free"

"Netanyahu you can't hide, we will charge you with apartheid."

"NYC you will learn, refugees will return."

"From New York to Gaza, long live the intifada!"

"Netanyahu you will see, Gaza will be free."

"Donald Trump you will learn, refugees will return"

"End the siege on Gaza now!"

"When Gaza is under attack, what do we do, stand up, fight back!"

"From Palestine to Mexico, all the walls have got to go"

"Israel, you can't hide, We charge you with Apartheid!"

****Same Arabic chant several times as well: "From the water to the water Palestine is Arab."

Nerdeen Kiswani, Within Our Lifetime

"We'll be loud for Palestine tonight, for Gaza tonight. We are out here to let all of New York City know what is happening in Gaza is completely unacceptable.  It's genocide.  It's genocide. It's genocide. Over 30 Palestinians were murdered in cold blood by Israel, by Israeli bombs and missiles, paid for with your US tax dollars. Your US tax dollars killed a 7-year-old child in Gaza this week. So don't tell me this has nothing to do with me. This has everything to do with you. This has everything to do with all of us because instead of our tax dollars going to fund the MTA getting clean water in Flint, MI, funding education in our communities, our tax dollars go to Israel's military and ends up as bombs on Palestinian homes and bullets in the chest of Palestinian children.  We send over $10 million of aid to Israel in military aid alone, $10 million just for the military, every single day. And with this money they use it to carry out ethnic cleansing against the Palestinian people. Gaza is the most densely populated region in the entire world. 2 million people are trapped with Israel controlling every border, because even with Egypt they collaborate with controlling the Gaza border. So 2 million people live without electricity for 18 hours a day."

"Since 2006.  Because of this, Palestinian children in Gaza have a 100% post-traumatic stress disorder rate. Every single child in Gaza suffers as a result of these bombings and these shootings that Israel commits against the Palestinian people constantly.  We stand here on a Friday. For the last 80 weeks, every single Friday, Palestinians in Gaza have been going to the border with Israel has denied them the right (UI few words)."

"We are out here in New York City on a Friday to demand an end to the siege and blockade of Gaza, and an end to the colonization of Palestine and the ethnic cleansing and genocide of the Palestinian people from Gaza to the West Bank, to the '48, from all over the world. Palestinians in Gaza are being constantly massacred with impunity by Israel, and the international community turns a blind eye. And US taxpayers send $10 million a day to Israel for their military (UI several words) – a 7-year-old Palestinian child who was murdered this week along with 30 Palestinians in Gaza simply for being Palestinian and living in Gaza. Gaza is the most densely populated region in the entire world. 2 million people live without electricity for 18 hours a day. 95% of the water is undrinkable. And 100% of children in Palestine suffer from post-traumatic stress disorder. (UI few words) demanding the right of political representation. For the last 80 weeks Palestinians in Gaza are marching to the border (UI word) and Israel demanding to go back to their homes, to go back to their original towns and villages in '48. Because the infrastructure in Gaza is crumbling. The sewage plants and electricity plants are crumbling. (UI few words). Israel has claimed that they will put Palestinians on a diet, restricting 1,500 calories per day per Palestinian and how much food they will allow (UI few words). What is happening to the Palestinian people is nothing short of a genocide."

Nerdeen Kiswani:
"Thank you everybody for coming out. We're all here for Palestine and we'll be out here for Palestine every single time Israel bombs or shoots another one of our people. We will be out here for Palestine every single time Gaza is suffering, and we will not let their suffering and their martyrs die in vain. Today we have people with us from all over the word, different organizations.  Don't let anyone distract us.  We're out here for Gaza.  Gaza! (several times). We have people with us today from all over the world, people standing in solidarity with the Palestinian struggle because they know it is a just struggle, a struggle that has had the solidarity of other oppressed peoples and oppressed nations since 1948, since we began struggling.  And we will continue to have the support of the people until our collective liberation. Because we stand together."

"Viva, Viva Palestina! Intifada intifada, long live the intifada. We are from the New York (UI word) resistance. My name is Amor. There is no such thing as Palestinian-Israeli conflict. A conflict implies two sides. There is an expanding Zionist settler occupation on the Palestinian land since 1948. There is only one solution to this problem - an end to the occupation and a return of Palestinian lands. The only response to settler colonialism is resistance. Our people in Puerto Rico have also been resisting settler colonialism of the United States for a hundred years. During that time, those who have resisted have also been incarcerated, killed, targeted as irrational and violent and angry. So we stand to commemorate the 35 Palestinians most recently murdered by Israel, and we also commemorate all those who had been murdered before. From Puerto Rico to Palestine, resistance is justified!"

Michael from Jews for Palestine Right of Return:

"Free, free Palestine!  Resistance is justified when people are occupied! Brothers and sisters, from Gaza to Jerusalem, from Ferguson to Haifa, from NYC to Nazareth, from Standing Rock to the Mexican border to Gaza, social justice movements today as they have for decades recognize that we all face the same enemy and that truly none of us are free until Palestine is free. Free free Palestine! Nowhere is this clearer today than in the Gaza ghetto where this week Israeli forces have murdered at least 34 people. 38 children whose deaths were not even important enough to the corporate media to be mentioned. And this comes after a whole year of the Gaza freedom march, march for return in which hundreds of people have been killed, shot to death, by Israeli snipers with American rifles and American bullets and American aircraft and American white phosphorous and $3.8 billion every year, every year in and out to the same murderous crimes. Not another nickel, not another dime, no more money for Israel's crimes! (2x).  We recognize and all of us do recognize that Zionism is not a people, it is not a country or a nation. It's a settler colonial regime occupying the land that was and always will be Palestine. Palestine the last 71 years has been the target of an ongoing Nakba carried out by a regime that is funded and armed by our own government here in this country, which South African African freedom fighters have called worse than apartheid. All of Israel is occupied Palestine.  And for this reason, the boycott divestment and sanctions movement is demanding an end to the occupation of '67, thee right of return and equal rights throughout historic Palestine. And no matter the odds, brothers and sisters, this international resistance to injustice will ultimately end apartheid Israel and bring about one democratic Palestine from the river to the sea with equal rights for all.  From the river to the sea, Palestine will be free! (2x)."

"Free, free Palestine! End the siege on Gaza now! I'll be quick. We're here today because every single bomb, every single missile fired to murder the children of Gaza comes from the United States. It's paid for by our tax dollars. This war is Washington's war. The blood of seven-year-old Amir (UI name), the blood of the (UI name) family, the blood of all those who have died and who are suffering in Gaza is on the hands of the White House of Donald Trump, of Congress, from the Pentagon. It's not complicated, it's not, it's very simple. If you want pace, the way to peace is end all US aid to the racist state of Israel and that every single Palestinian has the right to live in peace and freedom in every corner of the stolen land of Palestine. Not another nickel, not another dime, no more money for Israel's crimes!"

"How you doing New York? Free free Palestine! I'm 20 years old from Yemen and as far as I can remember watching TV, I've seen the children in Gaza being bombed. Growing up I've seen children my age and younger being bombed and I know that I could not stand silent. And there's always a way for us. If we can't be there physically, the least that we can do is raise awareness. So I'm gonna keep this short and sweet. I'm going to get to the point. Organize at any capacity that you can. On your college campuses. There is only one solution, intifada revolution! Intifada does not have to be in Gaza or Palestine. We're going to have an intifada in every classroom. We're gonna have an intifada on every college campus. We're gonna shut down all the Zionist events. Don't ever underestimate the value of raising awareness. Just the other day as Gaza was being bombed, the Zionist leader, the consul general Dani Dayan, was invited to speak at Harvard Law and a hundred students walked out of his talk and they shut the whole event down.  Let's try to do that on every college campus, let's shut down all the Zionists and let's start an intifada everywhere we are. Salaam aleikum."

We're going to march from Howard Square going down from 22nd and 6th Ave.  So we're gonna make a right. I know right.  And we're gonna go to 34th Street and let all of New York City know that we stand with Palestine."

"We need everybody to stick together.  My name is Nerdeen Kiswani and I am from Within Our Lifetime.  (cheers)   We're called within our lifetime because we believe that we will achieve Palestinian liberation within our lifetime. (cheers drown out her next words) to the constant massacres that the Palestinian people in Gaza and all over Palestine and all over the world are facing. And will put an end to Zionism and colonialism and the ideologies that continue to plague every (UI word) and genocide our people.  We are out here for Gaza.  We are out here for justice, and we will continue to be out here as long as people in Gaza continue to be bombed and shot, and as long as our US tax dollars continue to fund the Israeli military.  So I need everybody to say loud and stay together because we will be marching soon.  And as we march we need everybody in New York City to hear us and to listen to what we have to say about Gaza.  Because we are out here for justice."

"You guys hear how much my voice is cracking.  I'm losing for Palestine.  This is nothing compared to what they have to go through every day.  So we will continue to elevate our voices for Gaza, for Palestine and for the Palestinian resistance."