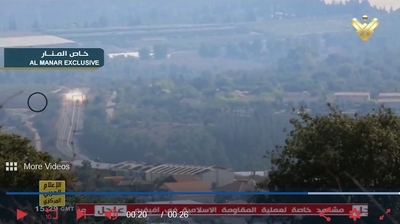 Hizballah used its al-Manar television network Monday to broadcast footage that it claims shows a missile strike targeting an Israeli military vehicle a day earlier. The attack followed a series of reported Israeli strikes targeting Iranian and Hizballah infrastructure in Syria and Lebanon.

Sharing the footage allows Hizballah to save face among its supporters and signal its resolve to far more powerful Israeli military. But beyond propaganda and deterrence efforts, Hizballah exploits its global media empire to strengthen a "resistance society" in Lebanon and cultivate to new bases of support throughout the world, according to a new Meir Amit Intelligence and Terrorism Information Center report. Hizballah's media domain is just one component of the terror group's infrastructure, along with its military wing, global terrorist apparatus, and vast network of social institutions spread across Lebanese society.

Iran funds most of Al-Manar's budget, which runs into the tens of millions of dollars. While it generates little advertising revenue, it is considered the most vital outlet in Hizballah's extensive media empire. Hizballah broadcasts propaganda around the world in four languages, primarily targeting the Lebanese population, followed by the Arab and Muslim world. But target audiences in the West are not immune. Hizballah outlets operate in English and French speaking countries and even some Latin America states. Some countries' efforts to bar the channel have been circumvented as Hizballah now relies on Russian and Indonesian satellite services to continue its broadcasts worldwide.

The Treasury Department in 2006 added Al-Manar and Radio Nour to its list of sanctioned Hizballah affiliates. Yet the media outlets continue to operate freely, including in Ramallah with the Palestinian Authority's tacit approval. The remainder of Hizballah's media outlets and key media figures remain off the U.S. sanctions list.

Hizballah's media is instrumental in Iran's efforts to promote the Islamic Revolution's radical ideology and cultivate a terror network throughout the Middle East and the world.

The network of media outlets is led by Hajj Muhammad Affif, who also serves as Hizballah chief Hassan Nasrallah's media adviser. Hizballah also runs several newspapers, websites, and social media accounts. It even engages in violent incitement against the United States through affiliated accounts on Twitter.

Click to here read the full Meir Amit report. It is part of a wider research project devoted to exposing Hizballah's vast social networks and institutions meant to strength the terror group's stranglehold over Lebanese society and Shi'ite populations worldwide.