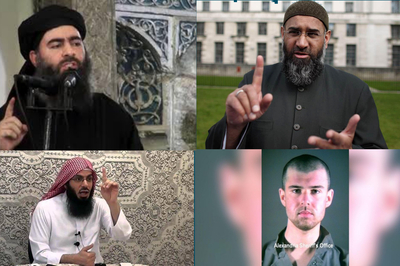 Although prisons have been an on-again off-again political topic for years, their main purpose has been threefold: to punish the perpetrator; act as a deterrent towards further crime; and ideally, rehabilitate the wrongdoer.

When it comes to imprisoned terrorists, however, that third prong has been almost entirely missing, and the damage is something we'll be experiencing for years. Some recent cases prove this point.

American Ahmad Musa Jibril, now reportedly living in Michigan, was convicted in 2005 on a 42-count indictment charging fraud, tax evasion, and money laundering related crimes. He was released from prison in 2012. Since then, Jibril has become one of America's leading radicalizers, and is believed to be inspiration for the 2017 London Bridge attack of 2017. In 2014, British researchers characterized Jibril as one of two U.S. Muslim leaders most influencing ISIS and other radical Islamic groups.

Is it fair to expect that time in prison would de-radicalize Jibril? There appears to be no indication that he entered into any rehabilitation or de-radicalization program. Or, did his prison time give him more notoriety and clout with the Islamists? It appears clear from the available research that Jibril did not denounce his extremist beliefs, and one could surmise that he may have become more extreme while locked up. In the end, the American public is now saddled with an Islamist committed to jihad, walking free and spouting his radical beliefs in whatever forums he pleases.

John Walker Lindh offers another relevant and recent case study. Lindh, the former "American Taliban," was convicted in 2002 for terrorism related charges and released last month. He acknowledged that he served time with Jibril at the prison in Terre Haute, Ind. Lindh reportedly became very close to Jibril.

According to a 2017 National Counterterrorism Center report, Lindh is expected to "advocate for global jihad and write and translate violent extremist texts." In 2015, he applauded ISIS' efforts to establish a Caliphate via letters to a news outlet. For extremist fence sitters, Lindh will most likely be an inspiration. To them, he fought against the west, was captured and imprisoned by western authorities, and is now in a place where he can preach and proselytize.

By all accounts, the prison system only fueled his radicalization. What can be done then? As IPT Senior Fellow Patrick Dunleavy rightly explains, Lindh's internet activity must be closely monitored. He found Islamism through the internet as a teenager, and likely will migrate back to it. Unfortunately, as a retired FBI agent who worked counterterrorism for most of my career, I would ask who is monitoring and whether they know what to look for. Although federal probation officers are highly competent, they haven't spent their entire careers monitoring the "language of jihad." Criminals and terrorists like Lindh learn to skirt scrutiny by authorities, and we can't afford to let him wander out of view. They do this by using encrypted apps and email platforms, communicating through cutouts (middlemen), obfuscating financial transactions through hawalas, and conducting surveillance detection routes to ensure they're not being watched.

U.K.-based hate preacher Anjem Choudary is another case example worth considering. Choudary, a former attorney and cheerleader for the 9/11 hijackers, was convicted in 2016 for publicly inviting support for ISIS. Released in 2018 to a halfway house, Choudary is now a free man in the U.K. Some news reports say that his old network from al-Muhajiroun is getting back together. Al-Muhajiroun is a militant Salafi jihadist network Choudary co-founded. It has been tied to terrorist attacks in England, including the 2005 transit bombings.

Prior to Choudary's release, U.K. Prisons Minister Rory Stewart stated that Choudary is "a deeply pernicious, destabilising influence." Stewart further added, "He is somebody who is a genuinely dangerous person. We will be watching him very carefully." But in the end, society again is left to deal with another outspoken extremist who will have freedom to inspire other radicals.

One final case study involves the self-proclaimed leader of ISIS, Abu Bakr Al Baghdadi. Baghdadi was imprisoned in 2004 during the Battle of Fallujah. He was incarcerated at Campa Bucca with what turned out to be the future ISIS leadership. Some reveled in the opportunity.

"We could never have all got together like this in Baghdad, or anywhere else," one jihadist told the Guardian in 2014. "It would have been impossibly dangerous. Here, we were not only safe, but we were only a few hundred metres away from the entire al-Qaida leadership."

The well-publicized torture taking place at the Abu Ghraib prison may have been a factor in sparking radicalization inside Camp Bucca. U.S. military leadership saw the Abu Ghraib abuses as an incubator for insurgent recruiting and networking. When Baghdadi was released from Camp Bucca, he initiated and led one of the world's deadliest terrorist efforts in history. The U.S. military can't be blamed, as it was just trying to round up evil throughout the country and keep it from carrying out widespread attacks.

But, rather than providing Baghdadi with a path toward a more peaceful life, his time in custody only fueled his obsession with jihad.

These four short case studies provide some interesting insight into what prisons can or cannot do. Nevertheless, for terrorists in particular, prison appears to provide some with an opportunity to bolster their credentials. It further appears to provide a platform for networking, radicalizing, and even generating an organizational hierarchy in some cases.

In the end, society is left with a well-intentioned system that unfortunately has to release hardened Islamists into a free society. We have to reevaluate what we're doing with these extremists while they serve their sentences. They're captive, and their schedule is controllable. It may be time for some hard discussions.

Brig Barker is a retired FBI counterterrorism agent and former Army officer. He is now the CEO of Red Rock Global Security Group.