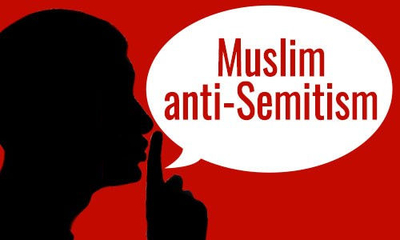 In Amsterdam, where a Syrian refugee twice last year shattered the windows of a kosher restaurant, men leaving synagogue remind each other to remove their yarmulkes before going out into the street. It is too dangerous to be seen wearing one.

In France, where a teenager inspired by ISIS attempted to decapitate a Jewish teacher in 2016, Muslim youth have killed 10 people during the past six years simply for being Jews.

And in Germany, where the history of anti-Semitism runs deep, a new report from the Federal Office for the Protection of the Constitution (BfV), cites more than 100 anti-Semitic incidents in 2017 for which Muslims were responsible. Much of these, the report says, can be attributed to the arrival of more than 1 million Muslim refugees and immigrants since 2014. Others, however, point to a rise in anti-Semitism among radical right and radical left groups, resulting in 1,646 anti-Semitic incidents in 2018, including 62 physical attacks.

Remarkably, clear statistics for Germany are difficult to fully ascertain. While 41 percent of German Jews questioned for an EU-wide report published by the European Union Agency for Fundamental Rights (FRA) stated they'd been subjected to anti-Semitic speech or attacks by fundamentalist Muslims, German police report that 94 percent of all attacks were perpetrated by right-wing extremists, and only 5 percent by Muslims. One possible reason for the discrepancy is the reluctance of many Jews to report attacks to the police, while they may be willing to include mention of them in a survey.

Either way, it is clear to German authorities that Islamism is taking a toll on the country's Jews, only deepening the dangers posed by right- and left-wing extremists. Yet, the BfV report says Islamist anti-Semitism differs from radical right Jew hatred in that "it is not racist." They do not explain what that means, exactly. Rather, they say, it is based on deeply-held religious and cultural beliefs Muslim immigrants bring with them. As Deutsche Welle reports, former Justice Minister Heiko Mass also noted that those who have come as refugees "have hardly had any reason to deal with German history. On the contrary, they often come from countries in which the powerful stir up hate for Jews and Israel, and anti-Semitism has almost become a cultural matter of fact."

In response, according to the BBC, the country's main Jewish organization is calling for classes on anti-Semitism specifically for Muslim immigrants as part of their integration curriculum. "Muslim communities must credibly and thoroughly fight anti-Semitism within their own ranks and make it their own matter," Daniel Botmann of the Central Council of Jews in Germany stated in a recent speech.

But solving Muslim anti-Semitism in Germany addresses only a small part of a problem that threatens to take over all of Western Europe. As James Kirchick observed in Tablet, "a third of respondents [to the FRA survey] have considered emigrating from Europe because they no longer feel safe there as Jews."

Hence, when Dutch newspaper NRC Handelsblad surveyed both Jews and non-Jews about their experiences and views of anti-Semitism, one man recalled the armed military police that stood outside his synagogue on his wedding day. "It is an image that remains with me always," he said. And David Suurland, a professor of political theory, noted that much of the hatred came from "people from Islamic cultures."

"People pretend it's about Israel and 'Zionists,'" he told the NRC, "but in fact they're talking about Jews. 'Zionists' run the media, the banks, the money, politics – everything that is wrong in the world is the fault of the Zionists."

But perhaps most telling of all was the incident last Saturday, Dutch Remembrance day, at a service honoring the victims of the Holocaust at the former concentration camp in Vught. As every year, the entire country came to a standstill for two minutes at precisely 8 p.m. Trains stopped along the tracks. Planes were grounded at the airports. The country stood in silence. And then, from the prison nearby Kamp Vught, several voices rang out against the stillness. "Allahu Akbar!" they cried – Allah is great.

None of which should be surprising. Among Jews responding to the FRA survey in the Netherlands, 35 percent said that the anti-Semitism they had experienced came from "[s]omeone with a Muslim extremist view."

In addition, countries with smaller Jewish populations have also noted a major increase in Jew-hate, particularly, but by no means exclusively, among Muslims. In Sweden, a far-right politician hideously joked about Anne Frank, calling her "the coolest girl in the shower room." On at least two occasions, synagogues have been bombed by Muslims. Hence, reports the Times of Israel, "In Sweden, Muslim extremism and the far right are part of a broader set of challenges to Jewish communal life. So while the Jewish community of Stockholm may be growing, the problems are nonetheless causing some Swedish Jews to fear for their future as a minority here."

And well they might. A February NGO Monitor report noted that the Swedish government is helping to fund "radical anti-Israel NGOs that routinely use anti-Semitic motifs in their demonization of the Jewish State and the Jewish people ... During its tenure, the Secretariat funneled over $13 million (2013-2016) to Palestinian NGOs that promote anti-Semitism, the elimination of Israel, the so-called 'right of resistance' (a euphemism for terrorism), violent imagery, and anti-Israel national origin discrimination. Several of these groups also have links to the Popular Front for the Liberation of Palestine (PFLP), a terrorist organization designated as such by the EU, the US, Canada, Australia, and Israel."

So sympathetic is Sweden to their cause, in fact, that a Palestinian-born Muslim who took part in throwing Molotov cocktails into a Swedish synagogue, was saved from deportation by a judge who feared that "the anti-Semitic nature of this attack could put him in danger from Israel" – effectively demonstrating more concern for his well-being than for the well-being of Swedish Jews.

No wonder, then, that the FRA report showed a full 40 percent of Swedish Jews cited Muslims as the perpetrators of attacks.

Still, nowhere has violence against Jews been more dire than in France, where a group of more than 250 intellectuals and politicians signed a statement warning of "ethnic cleansing" of Jews by Muslim extremists. Despite oft-voiced concerns about "Islamophobia," the statement claims, "Jews are 25 percent more likely to be the victims of violence than Muslims." Indeed, from 2012 to 2018, 11 Jews were murdered by Muslim extremists, simply because they were Jews.

Fully 10 percent of French Jews have left the country in that time – a total of about 50,000 people. And more are strongly considering leaving. They no longer feel safe in their homeland.

The statement, published in Le Parisien and signed by such notables as Alain Finkielkraut, Carla Bruni, Bernard Cazeneuve, Gerard Depardieu, Nidra Poller and several Muslim activist leaders, further demands the abolition of verses in the Quran that "refer to the killing and punishment of Jews, Christians, and unbelievers.... so that no believer can rely on a sacred text to commit a crime.

We expect the Islam of France to lead the way. We demand that the fight against the democratic bankruptcy of anti-Semitism become a national cause before it is too late. Before France is no longer France."

And yet France is not leading the way. French Muslims, like those elsewhere in Europe, are substantially more likely to protest against Islamophobia and Israel than to defend the Jews.

To their credit, several British Muslims have founded Muslims Against Anti-Semitism, a nonprofit devoted to uniting Muslims to fight Jew-hate. Last May, the organization ran a full-page ad in the Telegraph that announced: We Muslims have one word for Jews: Shalom." 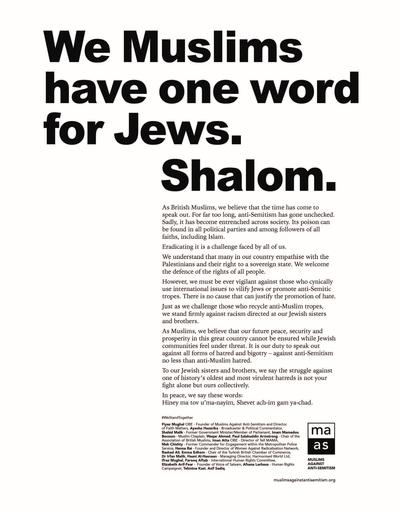 Similarly, German Jews' idea to introduce Jewish history and culture lessons to immigrants as part of their integration process – an initiative no other European country has apparently considered – also would be a commendable approach to addressing the problem. But it has yet to be enacted.

And even if it is, neither of these efforts will change the course of European anti-Semitism on its own. For this both offer far too little. And for far too many Jews, they come far too late.