Ben & Jerry's ice cream announced a new flavor on Tuesday, Pecan Resist, "with the intention to resist the current [Trump] administration's regressive agenda, celebrating the activists who are continuing to resist oppression."

In addition, the ice cream brand plans to donate $25,000 to four organizations devoted to social justice issues including the Women's March. 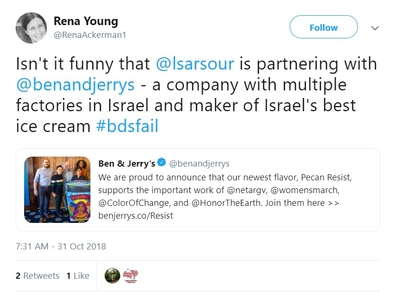 Some on social media were quick to be entertained by the news that Sarsour, a strident Israel hater and anti-Semite, is accepting money from a company that has a long-standing presence in Israel. How will she reconcile that with her self-described stance as "an unapologetic, pro-BDS, one-state solution" activist?

Ben & Jerry's has a vibrant operation in Israel, with its founders celebrating the business's 40th anniversary by touring Israel and handing out ice cream to Israeli fans.

Avi Zinger brought Ben & Jerry's to Israel 30 years ago as a licensee of the parent organization. The Israeli affiliate is one of two factories outside the United States.

Israel's Ben & Jerry's affiliate is independent of the global parent company, it said Wednesday in a Facebook post. But BDS advocates, those who want to isolate Israel economically, politically and in the arts, have called for a boycott of Ben & Jerry's over its Israeli presence.

But it's hard not to see the irony behind Sarsour's engagement with a popular brand that has visible business ties in the Jewish state.

For years, Sarsour has expressed a deep hatred for the Jewish state and anyone who supports it. Last month, she spoke at the Islamic Society of North America (ISNA)'s national convention, arguing that Muslims should not defend or "actually try to humanize the oppressor," which was a reference to Israel.

It seems that Sarsour has to pick her battles. She openly supports "resistance" against Israelis – a term often used by Islamists to include terrorism. At the same time, she is willing to accept money from an organization with a business presence in Israel to support her anti-Trump resistance campaign at home.