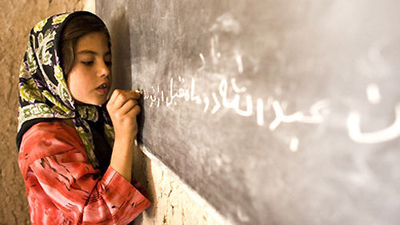 When a Taliban gunman shot Malala Yousafzai, then a 15-year-old student activist in Pakistan's Swat Valley, it brought long-needed attention to the struggle for girls' education in Muslim societies. Yousafzai, known internationally for standing up for the rights of Muslim girls to attend school, was deliberately targeted in a country where, according to ABC News, "Sixty-two percent of girls and five percent of boys are not in school," and where, in some districts, Taliban leaders have forbidden girls to attend school at all.

Now a new Pew study on education among Muslim girls examines the issue globally in an effort to understand why Muslim women are so often deprived of schooling. Yet oddly, the findings of the study, presented in Population And Development Review, do not match up to the brief overview Pew issued on its web site. Indeed, while the Pew text purports to be a summary of the Population and Development Review research and report, it frequently misrepresents the real findings.

Those misrepresentations begin at the top of the summary, written by the study's co-author Conrad Hackett, who is Pew's associate director of research and senior demographer, and Dalia Fahmy, a Pew writer who focuses on religious issues. Its headline: "Education of Muslim Women Is Limited by Economic Conditions, Not Religion."

But the study itself declares otherwise: "Recent cross-national studies ... find that the strong correlation between low female attainment and the Muslim share of the population persists even after accounting for many economic and structural factors," the authors note. "Although the measures of educational attainment, religion, and controls vary from study to study, the basic findings are consistent: countries where Muslims make up a larger share of the population have lower female attainment and wider gender gaps, on average." (Emphasis added.)

The authors further cite a 2016 analysis of 143 countries which found that "countries with larger Muslim shares have lower female enrollment rates in secondary schooling between 1973 and 2011, after controlling for GDP per capita, urbanization, public spending on education, political and civil rights, life expectancy, and wars and natural disasters." Accordingly, schooling for girls is more restricted in countries likely to adhere to sharia law than less conservative countries, like Lebanon. In other words, the less conservative the Islam practiced in a country, the more likely women will have the right to an education – and vice versa. This, the authors note, is true across the board, regardless of "country income, democracy, and oil values."

But if so, this observation makes several other statements from the researchers' Population and Development Review report also puzzling. First, if conservative countries restrict education regardless of oil values, one would expect Saudi women to be barred from schools. Yet instead, the researchers say Saudi women have made significant gains in education, putting them, with 11.5 years of schooling, "on par with Muslim women in Europe and the United States."

Have they really? Other data from a 2016 Pew report shows, rather, that Saudi men have an average of 10.3 years of schooling, versus 8.1 for women – while in the U.S., by contrast, Muslim women average of 13.6 years of school, exactly as many as Muslim men.

So which is true?

In fairness to the authors of the Pew summary, the researchers did find that economic conditions play a role in development and education in general: "Development is also associated with greater economic returns to schooling, boosting demand for schooling," they write, and note that "Democratic countries also tend to be more supportive of gender equality and hold more liberal sexual attitudes."

In other words, in countries where democracy is strong – as in the West – Muslim women more frequently attend school. And those countries tend to be secular.

Indeed, according to the researchers, "Young Muslim women tend to have more years of education, on average, in countries where they are a religious minority than in countries where they make up a majority of the population." This would seem to be in keeping with the actual numbers shown in the raw data, where American and European Muslim women enjoy far better educational opportunities than they do in Muslim countries. If this is correct, democratization and secularization are more significant than economic factors.

That said, the Pew study indicates that Muslim women are making gains. The gap between girls' and boys' education throughout much of the Muslim world is shrinking, with the exception of deeply Islamized countries such as Iraq, Yemen, and Afghanistan.

So why the misleading summary report on Pew's site? Is it indeed true that "a country's wealth – not its laws or culture – is the most important factor in determining a women's educational fate" – or do cultures and laws that encourage equality of the sexes and reward education for women have more to do with it? How much is the advance in educational opportunities for Muslim women, however minor, the result of world change generally, of globalization and of the growing development of much of the Middle East? And why the lead statement that religion is not what limits educational opportunities for young Muslim girls, particularly when the data shows specifically that Christian girls in many of the same countries (like Nigeria) experience up to three times as much schooling as Muslims?

Far better would have been to suggest that religion is not the only factor involved in oppressing women through lack of education in these countries. It's an important distinction, not only because it recognizes the role religion plays, but because it would state clearly what the research shows: that other factors are also in play, that Islam itself is not entirely to blame, that there is hope for a brighter future for Muslim women.

This is why it is not just the manipulation of facts, the dishonesty, that makes this Pew summary report so disturbing. Far worse is its perpetuation of the problem. Throwing money at Muslim communities is not what is going to help empower Muslim girls and women. But if the research is correct, international support for a more moderate, reform Islam and the advancement of secular democracy, will.