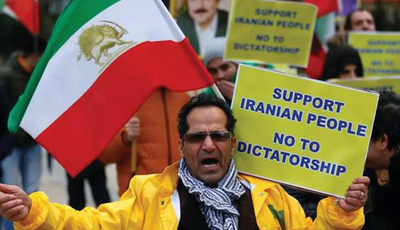 Chants of "Death to Palestine," "Help us, not Gaza," "Our enemy is right here, they lie and say its America" and "Leave Syria alone and deal with Iran" reverberated through Iran's capital Monday. Tehran merchants protested the collapse of their country's currency, the rial, which has lost half its value this year.

Other demonstrations broke out in other Iranian cities.

The chants show discontent with the government's indifference toward Iran's economy and its insistence on spending billions of dollars on foreign wars and on terrorism. Iran received more than $100 billion in sanctions relief under the Obama administration's nuclear deal, but ordinary Iranians have not seen the benefits.

Iran announced plans this week to set the official currency exchange rate at 42,000 rials to the dollar. A dollar bought 70 rials after Iran's 1979 revolution. Sanctions announced last month by Secretary of State Mike Pompeo could further worsen the situation.

The Iranian Revolutionary Guard Corps (IRGC) dominates Iran's economy. It also forms the backbone of Iran's terror support around the world, from Hizballah and the Shiite militias in Iraq, Syria and Lebanon to Hamas and Palestinian Islamic Jihad.

The IRGC's investment in terrorism is directly connected to the plummeting rial, exiled Iranian journalist Babak Taghvaee told the Investigative Project on Terrorism.

The magnitude of the protests rivals those of 1978 that brought the current regime to power.

While the protests caught the regime off guard, they are not expected to lead to its overthrow, Taghvaee said. Unlike the shah's regime, which acquiesced to foreign pressure in the face of demonstrations, the Islamic Republic will fight to keep its power.

"This regime is not acting softly like [the] shah. As they always say: 'We have not come to the power that easily, to leave quickly,'" Taghvaee said.

But if it did fall, the repercussions would extend far beyond Iran's borders, Commentary magazine writer Sohrab Ahmari wrote.

"Hamas and [Hizballah] and Palestinian Jihad can kiss their Iranian funding goodbye if the regime falls," Ahmari said.