While many analysts and most of the international community refuses to acknowledge Iran's role in fueling tensions on Israel's border with Gaza, Hamas leader Yahya Sinwar this week boasted of his organization's "strong and warm" ties with Iran and Hizballah. 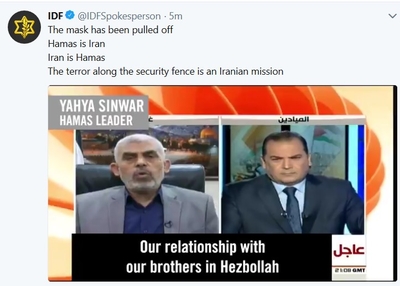 In an interview Monday with Lebanon's Al-Mayadeen TV channel, Sinwar admitted that Iran funnels "a lot of money, equipment and expertise" to Hamas' military wing and other Gaza-based terrorist organizations, reports the Middle East Media and Research Institute (MEMRI),

"Who supports the resistance in Gaza and Palestine? Iran. It is Iran and Hizballah that confront that entity [Israel] along with us," Al-Arouri said in a Dec. 30 interview on Al-Quds TV.

He admitted that "the aid Iran provides to the resistance is not merely symbolic" and that "nobody but Iran gives us [Palestinian terrorist groups] any military support."

In his latest interview, Sinwar also discussed "excellent relations" with Hizballah and revealed that both terrorist groups "coordinate and are in touch on an almost daily basis."

This is the latest in a growing number of statements from senior Hamas and Hizballah leaders acknowledging that relations have reached new heights – to the point where Hizballah is helping Hamas build military infrastructure in south Lebanon to threaten Israel.

These connections and public admissions are ignored by Israel bashers in the West.

Hamas leaders, on the other hand, openly admit that they coordinated the violent demonstrations and orchestrated several attacks on the border with Israel.

"This is not peaceful resistance... so when we talk about 'peaceful resistance,' we are deceiving the public," Mahmoud Al-Zahhar said in a May 13 interview with Al-Jazeera, adding that Hamas' efforts at the border are "bolstered by a military force and by security agencies."

Iran and its main proxy Hizballah are actively supplying Hamas with weapons and talking on a near daily basis to coordinate terrorist operations against the Jewish state.