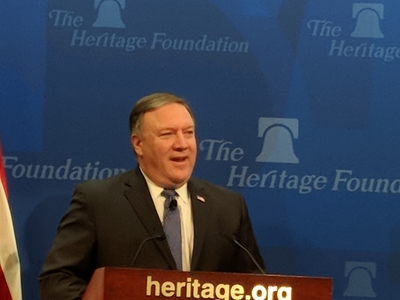 New sanctions are around the corner that could help "crush" Iran's ability to fund terrorism and its nuclear program, Secretary of State Mike Pompeo announced Monday in a speech at The Heritage Foundation. Pompeo promised the "strongest sanctions in history." He listed 12 demands that Iran would need to fulfill to have the sanctions lifted. These demands include an end to Iran's support for terror; carte blanche inspection of Iranian nuclear sites by the International Atomic Energy Agency (IAEA); and ending ballistic missile proliferation.

"We will track down Iranian operatives and their Hizballah proxies operating around the world and we will crush them," Pompeo said. "Iran will never again have carte blanche to dominate the Middle East."

On May 8, President Trump announced the end of U.S. participation in the Iran deal, formally known as the Joint Comprehensive Plan of Action (JCPOA). European governments, however, say they plan to remain in the agreement.

Pompeo slammed the Obama administration, which negotiated and pushed for the deal, for failing to listen to critics who argued that releasing approximately $100 billion in frozen assets to Iran would increase its ability to support terrorism.

"Remember, Iran advanced its march across the Middle East during the JCPOA," Pompeo said. Islamic Revolutionary Guard Corps (IRGC) Quds Force chief "Qasem Soleimani has been playing with house money that has become blood money. Wealth created by the West has fueled his campaigns."

Iran used the released money from the JCPOA to fund the IRGC, the Taliban, Hizballah, Hamas and the Houthis in Yemen, Pompeo said. Iranian backed militias under Soleimani's leadership control a wide swath of territory between the Iran-Iraq borders all the way to the Mediterranean. Israel recently launched retaliatory strikes on Iranian targets in Syria after Iranian rockets landed in the Golan Heights.

Al-Qaida leaders also continue to be harbored in Iran.

Not surprisingly, Iranian President Hassan Rouhani rejected Pompeo's demands, saying Iran will "continue our path with the support of our nation."

Last week, the Trump administration sanctioned the IRGC Quds Force and imposed sanctions on the head of Iran's central bank, which Pompeo said funded Hizballah and other terrorist organizations.

"The Iranian economy is already in free fall. That has to put a crimp in the regime's capacity to fund surrogates. If the administration follows through there certainly won't be more money to spread around," James Carafano, vice president and director of the Center for Foreign Policy Studies at the Heritage Foundation, told the Investigative Project on Terrorism (IPT).

U.K.-based exiled Iranian dissident and author Babak Taghvaee criticized Pompeo's speech on Twitter for not including human rights as a condition for lifting sanctions.

"Iranians could have helped #US to not only achieve these twelve objectives rather more," Taghvaee told the IPT.

Other Iranians responded by creating #ThankYouPompeo and #IranRegimeChange hashtags on Twitter.