Cloak and Fashion: When a Museum Becomes a Tool for Islam

Look out, Anna Wintour. It's not you, but the world's Muslim women who now rule as the "arbiters of style within and beyond their communities."

At least, that is, according to San Francisco's De Young Museum and its curators. And to recognize their achievements and influence, the museum is mounting "Contemporary Muslim Fashions," an exhibition of what it calls "modest" and "Islamic" fashion, running from Sept. 22 to Jan. 6, 2019.

Even the project's title, let alone its content, leaves the big questions wide open: What is "modest" fashion? What is "Islamic" (or "Muslim") fashion? Why are they synonymous? Are the covered styles of Orthodox and Conservative Jewish women not also "modest?" And why does "Muslim fashion" deserve its own very special exhibition in a major American museum?

"Immediately, 'orientalism' pops into my head," says Yasmine Mohammed, a former Muslim and activist strongly opposed to the Muslim veil. "We would never celebrate modest culture in any other realm. But suddenly when it's modesty culture coming from Islam it's exotic and beautiful and something to be put in San Francisco museum exhibitions."

To be fair, this isn't entirely the De Young's fault. So-called "Muslim fashion" has become an increasingly trendy buzz phrase, particularly in the corporate world, which hears the siren songs of wealthy Arabs and of a 1.6 billion-person-strong global market.

Even more, it has become something of a socio-political movement, pressed by activist Muslims in the West and urged further by the likes of the Islamic Fashion and Design Council (IFDC), a multi-national organization that recently declared a worldwide "Modest Revolution."

Yet while they've found many Muslim "revolutionaries" to sign on, for others, the very idea of such a "revolution" insults the millions of women who face the oppression of mandated niqab, hijab, or burqa – that is, "Islamic dress." Nearly every day, women rip off their hijabs on the streets of Iran, risking a sentence of up to 10 years in some of the world's worst prisons, for the right simply not to have to wear them.

Moreover, as Mohammed points out, "Girls get killed for not wearing a hijab." Hence for her and many others, the IFDC's "revolution" assaults the memory of girls like Aqsa Parvez, whose father and brother beat and strangled her to death in Ontario, Canada for being seen in public without her scarf.

But there is also something particularly insidious about the IFDC-declared "revolution": It is far more than just a fashion statement. Although its Pakistani-American founder and chairman, Alia Khan, insists the organization is not political, she told an interviewer in Dubai last year, "Wearing a headscarf is something only Muslim women do. You rarely see a Christian woman do it."

This is simply a fallacy, as the world's Orthodox Christian and Jewish women, among others, can tell you. But it points to what the "revolution" is really about, and it isn't clothing. As Khan also notes, "There's a purpose and a wisdom" to the idea of "Islamic Fashion." The implication is that for her, as for her supporters, this is really a Muslim revolution, not against the veil, but for it; not about the veil but for what it stands for. Indeed, according to the, Atlantic, "the Arabic word da'wah, used to describe forms of proselytizing of Islam, is applied to attractive pious fashion, which can normalize and help spread the religion."

The De Young exhibition includes styles anyone could find anywhere – long-sleeved evening gowns, for instance, and slacks or maxi skirts paired with a long-sleeved shirt. What's more, other designs are either skin-tight or shockingly revealing, like a transparent cut-work abaya by the label Wadha, or the white lace dress by SlowFactory. What makes these Islamic? Perhaps it is the headscarf the model, in a gesture of pure hypocrisy, wears around her head. 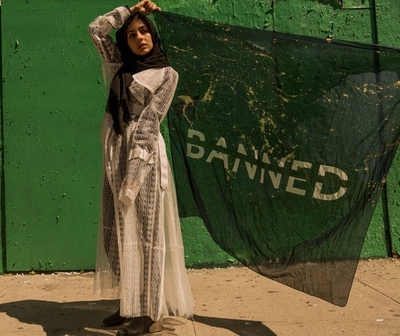 But while the De Young may be an unwitting victim – or tool – of Khan's "revolution" and "purpose," her politics is not what the museum is really about. Rather, Yasmine Mohammed believes, its curators and directors are confused, as are corporations like Macy's and Nike, which clamor for the Muslim fashion market, estimated by the business magazine Fast Company at $254 billion.

"If we're going to look at this from an Islamic perspective," says Mohammed, "the reason women are supposed to dress that way is to avert the gaze of men. You're supposed to look as unattractive as possible so that men don't rape you. So the idea of Muslim fashion is a paradox, because Islamic clothing should not be fashionable; it should not be beautiful, it should not be on runways. It should be boring and ugly and make people not want to look at you. It's the exact opposite of fashion."

The Quran's verse 24:30 is among many that fit Mohammed's description: And tell the believing women to lower their gaze and be modest, and to display of their adornment only that which is apparent, and to draw their veils over their chests, and not to reveal their adornment.

Verse 33:59 reads similarly: O Prophet, tell your wives and your daughters and the women of the believers to bring down over themselves [part] of their outer garments. That is more suitable that they will be known and not be abused.

Despite these most basic Islamic laws, Khan told Fast Company that Muslims in her focus groups thought "Muslim-specific lines were not as fashion forward as the lines those high-end brands offered non-Muslim customers." They complained they were not colorful enough. They were too cloak-like. "What these women really want," she told the magazine, "is the same miniskirt they saw on the runway, but slightly looser and longer."

A "slightly looser, longer" mini-skirt does not sound particularly modest. But if it is, would "Muslim fashion" proponents then also argue that, say, Protestant women who wear midi-skirts, or neo-hippies in long tie-died frocks, are wearing "Muslim fashion?" Or Mormons in their long skirts and Amish women in their bonnets? What to make of Chanel's belly-baring, harem-inspired dress from the 2018 cruise collection?

Adding to the confusion is that the De Young Museum insists that its Muslim fashion exhibition focuses on the ethnic and cultural backgrounds of the clothes on view, with an emphasis on the "rich textile and costume traditions" of Indonesia. The suggestion, then, is that the exhibition is more about cultural fashions and ethnic textile traditions – a laudable endeavor.

Except: "This clothing is not cultural clothing," says Mohammed, "That clothing is religious clothing. Muslims come from hundreds of different countries, but wherever a Muslim is coming from, people think they're all the same. So when we say we want to honor people's cultures – please, go ahead and do that. Honor all the people on the planet. It's great to look at all the fashions and styles and evolution of clothing in all parts of the world, but when you start to look at the hijab you are no longer looking at cultural clothing, you're looking at religious clothing."

It's a critical distinction, and one that the De Young curators seem either not to recognize or to willfully ignore. While they proudly boast that the exhibition includes "historic photographs of the women's demonstration in Iran in 1979 against the enforcement of the veil," they do not address the horrors of the "morality police" in many Muslim countries – vice squads that violently beat women for improper dress. In one infamous case, Saudi "morality police," refused to allow schoolgirls to escape a burning building because they were not "properly covered." Instead, they beat them before forcing them back inside. Fifteen girls died, and 50 more were injured.

The De Young Museum is clearly aware of these events, as they are of the women fighting for their freedom in Iran today. To their credit, the curators have included among the fashions a few contemporary art works deeply critical of the forced veiling and oppression of women in the Muslim world, such as Shirin Neshat's award-winning "Turbulent."

But the fact that these critiques appear in the exhibition underscores the greater concern behind the very staging of the show – and the force behind the Muslim fashion movement itself. If what Muslim women really want is high fashion, if "boring," cloak-like abayas do not please them, then why fight for "modest fashion" at all, particularly when the very notion is, by definition, entirely un-Islamic? Better to spend their energies on ending the oppression of "modest" clothing and the laws that demand it in the first place. And perhaps, instead of celebrating these "modest" "Muslim" fashions, the museum – and all cultural institutions in the West – should defend, support, and celebrate the women who fight just to be free of them.