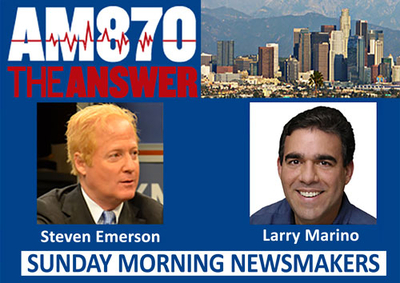 Emerson: Seventy-percent of all allotments of this lotto system are granted to countries with national security problems, terrorist problems, or vetting problems that can't be solved.

Marino: My guest is Steve Emerson on the Investigative Project on Terrorism. He is joining us right now to discuss some of the aspects of the stories that have unfolded this week involving the New York terror situation there. Steve, thank you so much for being with us on the program.

Emerson: Happy to be with you.

Marino: As far as events in New York City, this is considered the biggest terror event since 9/11 – an individual rents a truck, drives down a bike lane, kills eight people, injures scores more. There's all sorts of debates about this story, from whether he should be picked up and sent to Gitmo, whether he should get the death penalty or not. As someone who studies all this, what are some of the things and issues that come to mind to you that we need to focus on?

Emerson: First of all, it's been happening in Israel and Europe for years now. And actually, car rammings have happened in the United States in the past decade, although not with the same lethality. Number two, I think that we're going to find more people arrested. I do not think he was the mastermind and sole inventor of this attack. The background information that I have received, besides just the official complaint, which states that he downloaded ISIS videos on his cell a year ago, suggests that he had been radicalized a long time ago and may in fact have come to the United States under the lottery system, which has a lot of defects, in 2010, as a member of the Islamic Movement of Uzbekistan, a terrorist group then affiliated with al-Qaida. Now, you should know that he is Uzbeki, but in the truck, all of the writings that they found in the notebook were in Arabic, perfect, fluent Arabic. So, the question is how does he learn the Arabic? He is known to have had several passports, and they cannot account for his timeline for a couple of years, which suggests he may have been in Syria, or elsewhere, or someplace else. Number two, the mosques that he affiliated with in the United States, in Paterson and in Tampa, were Arab mosques mostly known to be affiliated with Arab ISIS, Al-Qaida, Hamas, or Chechen terrorist groups, not Uzbeki.

Marino: You bring up several points here and I don't want to let them slip by, so quick answers. There is one report that says that the U.S. and New York City used to monitor the mosques –

Marino: – that this individual went to, but under a program that New York's Mayor Bill de Blasio did, they stopped doing that to try to improve relations. What can you tell us there?

Emerson: Yes, there was a program, in fact I spoke to one of the officials in charge of the program who actually shared with me some of the intelligence reports the other day, from 2006, in particular the Mosque Omar that was in Paterson, which this terrorist directly went to the moment he was allowed into the United States. And, that document shows, states absolutely, uncategorically that the Mosque Omar in Paterson was known to be a hotbed of radicalism, involving Chechen and Hamas terrorism. Now, there was a whole program of surveillance implemented by the New York Police Department of various mosques in New York and New Jersey as part of an attempted effort to monitor potential terrorism. That's intelligence gathering. Nobody's rights were interrupted, but the mainstream media made this into a big issue of civil liberties. And, in 2013, I believe, the mayor of New York made a big apology, promised not to do any type of surveillance, stopped everything, and the program was discontinued. I think that was a big mistake. And, the fact of the matter is unless you have intelligence, that is the (UI word) of stopping terrorism, without that, you cannot stop it. And that is, by the way, the reason why the U.S., above all other countries in the world have stopped 97 percent of the more than 200 attempted Islamic terrorist attacks since 9/11.

Marino: Steve Emerson with us, Investigative Project on Terrorism. We're talking about the events of this past week. I want to ask you about the Visa Diversity program. You mentioned it with a bit of a criticism a moment ago, we've talked to others about this, how did that come about, and why are there people still adamantly for this?

Emerson: You know you raise a very good question. You know I think it was created in 1990, and it started off I think with good intentions, but now 70 percent of all allotments of this lotto system are granted to countries with national security problems, or terrorist problems, or vetting problems that can't be solved.

Marino: But, even with this happening, there are those who are saying – no, for example, Schumer endorses, this is a legal program, and he finds it atrocious that the president would make it a political issue.

Emerson: Of course, he's, he created the program back in 1990. You think he's going to admit that he was wrong? I mean he's part of the pro-, you know the Democrats, like Bill de Blasio, the mayor of New York, or even an Assistant NYPD Director, John Miller, stated yesterday that Islam or mosques have nothing to do with the issue of terrorism, of Islamic terrorism. I mean you combine the, I'm sorry to be negative here, but you combine the I.Q. of both men and you come up with negative integers. The fact of the matter is that the lotto program today is an abomination. It is you know if you look at the numbers, you see the countries that are allotted immigration passes, and they are basically free passes without the normal vetting, to come into the United States to countries that have the worst security problems.

Marino: And yet they still defend it. That's amazing. Alright, let's recap where we are and let's talk about some of the things that are being talked about now. One of those is the president kind of, he says you know death penalty, he tweeted out it should be death penalty here. Mayor de Blasio is against the death penalty in this particular case. He says he generally doesn't support the death penalty. These people probably would like to die for Allah. So, do you give them what they want? Or do you deny it? How do you take that issue into account?

Emerson: Well, that's a good question. First of all, legally each state, you know it's a state issue. The states have designed their (UI word) or prohibition on the death penalty. Texas, for example, allows it; some other states don't. Would he be a martyr? Probably. But, the fact of the matter is this is a man who is, I'll be honest with you, based on information that I've obtained from law enforcement, he is a stooge. I think there will be other people arrested.

Marino: There are also some who run a theory that the people who get sucked into this ISIS belief through their website are people who have certain proclivities – they're aimed toward men who feel disenfranchised, they're taught that you know people of the Muslim faith are being disparaged by the Western world and that they need to fight back. Talk a moment about this profile that ISIS uses to attract people like him.

Emerson: First of all, it's not just ISIS. Israel just did a study of terrorism for the last 15 years, and found that over 25 percent of Islamic terrorists who carried out attacks against Israelis were either married, middle class, had jobs, had children, and above the ages of 40, or even female, so the notion that there's this one profile is not true. Number two, if you remember the Counter Violent Extremism big summit that Obama had in 2015 or '16, one of his main tenants was – if only jobs were available, that would stop it. That's absolutely not true. The Muslim Brotherhood, an extremist group that spawned al-Qaida and all of the other Sunni terrorist groups, is composed mostly of PhDs in engineering and medical doctorates. So, the fact is, yes, there are people like this guy, who are you know very likely losers who likely will be attracted to it, but in terms of other ISIS people, the captured ones that the Peshmerga have actually captured, more than 150, have shown so far that at least 50, according to their numbers, were middle-class husbands who left their wives. So, I don't buy the notion that it's simply some people who are off their rockers or totally alienated, looking for jobs, missing something in life. That may apply to some people, as it applies to other people who would carry out killings.

Marino: Well, let me ask you this, because we're running short on time, short answer. The president first had some tweets regarding whether he should be taken to Gitmo, that he should be treated more like an enemy combatant. Later in the week he kind of backed away from that and said, well, I guess he should be tried in New York; that's where the crime took place. What about that? Do we need to have a category that allows us to keep people who commit terror acts on U.S. soil and not send them through all the appeals and all the things that our courts allow?

Emerson: You know I think that if they carry out an attack in the U.S., I happen to believe that the regular U.S. law should apply and that they should not be treated as enemy combatants. If they're caught outside the United States carrying out an attack, then the reverse should apply. But, I also don't think that politicians should inject themselves ahead of trials and motions, because that has an effect in terms of rulings whether it should be held outside of normal jurisdiction.

Marino: With that I've got to leave it there. I want to thank you very much, Steve Emerson, Investigative Project on Terrorism. Thank you so much for providing some background on this story this week.