Is Austria's Burqa Ban an Example for America? 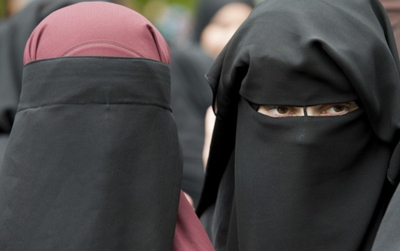 With the number of jihadist terrorists in Europe rising, and a concurrent increase in the number of women involved in Islamist terrorism and recruiting, Austria's centrist government passed a bill in May to prohibit all face coverings in the public sphere. The measure, which carries a fine of €150, includes a ban on clown makeup, ski masks, and even hospital masks worn on city streets; but it is clearly the face-covering garments of Muslim women – the niqab and burqa – that are the law's real targets. The so-called "burqa ban," which went into effect Oct. 1, makes Austria the fifth European country to outlaw the wearing of face-coverings in public, and the fifth to do so on the basis of national security concerns related to Islamic dress. France, Belgium, Latvia, and Bulgaria already have such laws in place, and partial bans are in effect in Germany, the Netherlands, Switzerland, Italy and Spain.

Now other countries are starting to consider instituting comparable laws, despite ongoing protests from Muslim and many rights groups. Even Morocco, which is 99 percent Muslim, recently banned the sale and manufacture of burqas, citing safety concerns even though a small minority of Moroccan women wear face coverings. Reasons for such bans internationally range from similar security concerns to uneasiness about the oppression of Muslim women and their safety navigating in garments that restrict their movement and their vision.

Crimes have also been committed by women and even men disguised by burqas and niqabs: in 2009, a robber dressed in a burqa ran off with £150,000 worth of Rolex and Cartier watches from a jewelry shop Oxfordshire, England; a year later, two men, also in burqas, raided a French bank and escaped with €4,500; and when a non-Muslim Melbourne couple staged a robbery in August, the woman wore a burqa to conceal her identity.

Similar events have also taken place in the United States, most notably a rash of crimes in Philadelphia 2007 to 2013, including a number of bank robberies and the kidnapping and rape of a 5-year-old girl.

Yet a 2016 poll indicates that fewer Americans than Europeans support prohibiting the burqa and similar coverings. As in Austria and elsewhere in Europe, Americans' arguments against the bans tend largely to rely on the notion that they impinge on women's freedom to wear what they like. But this position ignores other public safety laws affecting dress – including complete undress – such as requirements to tie one's hair back while handling food, or to wear safety helmets on motorcycles and at construction sites.

Others insist such prohibitions violate laws protecting religious freedom, a position many Muslim feminists view as misguided, at best. Indeed, according to a Spectator editorial by Muslim activist and physician Qanta Ahmed, the idea of the full-face covering for Muslim women is a "recent invention," a concept "derived not from the Quran or early Islamic tradition, but from a misogyny which claims a false basis in the divine."

In this regard, Austria's approach is unique, as it actively seeks to address such misogyny in ways that distinguish it from other European bans. Following the earlier example set by the Dutch government in 2006, Austria, home to an estimated 700,000 Muslims – about 8 percent of the population – also now requires refugees and other immigrants to take German language courses and civics lessons that teach the moral codes and values of Austrian culture, including ideals of equality between men and women and acceptance of homosexuality.

Hence, while Muslim groups such as the Austrian Islamic Religious Authority describe the burqa ban as "Islamophobic" and discriminatory, proponents believe the opposite is true: by requiring Muslim women to live and dress as others in their society, they are breaking down the walls between them, encouraging equality, unity, and cohesion. Acceptance and respect of Austrian values are basic conditions for successful cohabitation between the majority Austrian population and people from third countries living in Austria," Chancellor Christian Kern said in a statement.

And nothing, said Pakistani-American counterterrorism expert and author Farhana Qazi, could be more Islamic. "Muslims living in a non Muslim country must respect the law," she said in an e-mail. "It is stated clearly in the Quran. God mentions the contract between the rulers and the ruled or citizens / residents. Muslims by Islamic law have to respect secular law or move to another country. It's that simple. And what I am saying is not my opinion but Islamic jurisprudence. Many Muslims don't know their own religion or law."

But this is not the only reason Qazi, like Ahmed, supports such laws in Europe and would like to see them enacted in America as well. "To be honest," said the former U.S. government counterterrorism analyst and military instructor, "the burqa ban is a response to a security concern that is valid. I respect women in hijab, but the burqa is a cultural cloth to me. This is not Islam."