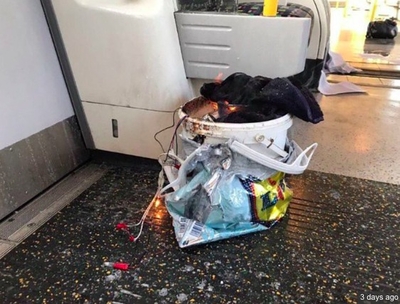 Three separate radical Islamic terror attacks took place Friday in Europe. The most serious was caused by an improvised explosive device (IED) placed on a London underground train in the Parsons Green station which injured more than 30 people.

Witnesses spoke of hearing a "whooshing" sound and then seeing a fireball coming at them from a plastic bucket that was placed unattended on the floor of the rush hour train. The device's failure to completely detonate was credited with saving lives. "There is no doubt that this was a serious IED (improvised explosive device) and it was good fortune that it did so little damage," said UK Interior Minister Amber Rudd.

Two men, ages 18 and 21, are in custody. ISIS has claimed responsibility for the attack.

Until the second suspect's arrest Saturday night, Prime Minister Theresa May raised the terror threat level from severe to critical, meaning that future attacks may have been imminent.

As the number of terror attacks in Europe increases, the question arises whether current counter terrorism strategies are working. Issues such as immigrant vetting, watch lists, and de-radicalization continue to be critical components that require, upon closer examination, changes. At least one of those components failed in each attack.

This was the UK's fifth terrorist attack this year. Other attacks targeted the Westminster Bridge, Manchester, Borough Market, and Finsbury Park. The terrorists have used knives, vehicles, and bombs to kill and injure both police and civilians.

These incidents have contributed to a 68 percent increase in terrorism arrests in the UK. Authorities say as many as 3,000 people are under active investigation with 20,000 more causing concerns about radicalization and terrorist leanings.

Former New York Police Counter Terrorism Director Mitch Silber believes that some of the UK's previous counter terrorism and de-radicalization programs have been insufficient. "One of the things the UK will have to do is hire more intelligence analysts, police investigators, and staff in order to be better prepared to match up with the numbers that they are up against," he said.

Similar statistics are also showing up in France, which suffered two more terror attacks on Friday. A man with a knife shouting "Allah Akbar" attacked a French soldier at the Paris Chatelet subway station. Then, two women in Chalon-sur-Saone were attacked by a man wielding a hammer. He also shouted, "Allah Akbar" as he assaulted the women, witnesses said.

This was the tenth terrorist attack in France this year. France's terror watch list has more than 18,500 names on it, up from 15,000 a year ago.

So far, the United States has seen only a minimal number of terrorism attacks compared to the EU. In March, the FBI said it had as many as 1,000 open terrorism cases. Many of these involve people returning from Syria and Iraq or ISIS sympathizers. A third of those cases reportedly involve refugees.

The Bureau has also admitted that some of the people who carried out recent terrorist acts in the U.S. were "previously known to authorities." That includes Orlando nightclub shooter Omar Mateen, Boston Marathon bomber Tamerlan Tsarnaev, and would-be Garland, Texas shooter Elton Simpson.

People can become known to authorities in several ways. There may have been a prior allegation of radicalization, or an incident which caused federal or state law enforcement agencies to interview the subjects or their families. This creates a paper trail which may or may not be shared with other agencies.

Managed by the National Counterterrorism Center's Terrorist Identities Datamart Environment (TIDE) the terror threat list has more than 1 million names on it. Other federal and state agencies have their own "persons of interest" list. Their information sometimes is not shared because of small-minded administrators and long-standing turf wars. This was a problem prior to 9/11.

Yet there are indications this continues to be an issue. The FBI's National Data Exchange program, initiated in 2008 to foster cooperation among federal, state, and local law enforcement agencies, still does not have full participation due to longstanding mistrust between the groups.

Any list is likely to include duplications and erroneous entries, but still the numbers are mind boggling. How do you keep track of more than 1 million potential suspects? It is critical to make resource sharing and information sharing priorities if the information contained on the lists is to be of any value in preventing future terror attacks.

It will require decisive action both from the congressional and executive branches. An agreement on how to properly vet individuals from countries ravaged by war or terrorist attacks seeking refugee status would help. A clear policy on what to do with people who commit terrorist acts would address the growing concern of what happens when someone who has been radicalized is released from prison.

If we do not address this issue sooner or later some that have been released will return to the battlefield. The environments where radicalization seem to thrive most – cyber chat rooms, websites, prisons and radical mosques – must be countered.

Otherwise we're just fooling ourselves in to thinking we can avoid the surge in terror attacks that we see in Europe. As coordinated military action continues to squeeze ISIS and regain territory in the Middle East, it undoubtedly will increase its call for followers to carry out attacks in their home countries.

The U.S. will not be immune from the threat.