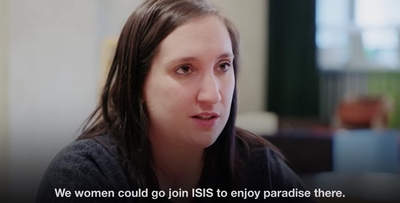 Muslim converts have long been especially valued by recruiters for Islamist terror groups. "Their ability to operate freely in Europe, Asia, and North America without arousing the suspicion of security authorities," a 2006 study said, making them especially useful in executing plots. In addition, the study claims, "They are among the most aggressive of Islamist activists."

More than a decade later, ISIS recruiters continue to seek out new converts. Most of this activity takes place online, according to former radical turned counterterrorism professional Mubin Shaikh, who particularly blames social media. "The volume and speed of information communication – I think what that does is overwhelm young people," he says. "They exist in a paradigm where kids who get bullied online go and kill themselves. Or it will be the crazy antics they do in videos where they do something extremely dangerous and often it gets them killed. I put this kind of ISIS recruitment in that category of youth being overwhelmed."

Compound that with the allure of a counterculture identity that, as he notes, has always been cool. "For them, it's a completely exotic thing."

Women are especially vulnerable, Shaikh says. "ISIS opened the door to women. Al Qaeda gave them no role. But ISIS said, 'you can be part of this great project called the Caliphate.'"

He describes one particularly powerful video made by such a young woman, the Belgian Laura Passoni, after she had gone to the Islamic State and managed to return. "This white girl, she's in love with this guy, she breaks up with him, she's on the rebound. She hooks up with this one guy and they go on a cruise and they end up in ISIS territory. This is what they do."

Recruiters also monitor chat rooms. "They see who makes these comments, then they go on and talk to them. It's the same as child sex predators," he says. "Exactly the same."

And because women suffering a broken heart or looking for romance are especially vulnerable, male recruiters often infiltrate dating sites, luring women with promises of the exquisite jewelry they will receive from the handsome husbands they will meet when they arrive at the Caliphate. Passoni's seducer, for instance, tempted her with visions of a life in a luxurious villa and the horses she would own. "He sold me a dream I would have everything I wanted in Syria," she recalls in the video.

But it isn't just women, of course. A young non-Muslim man might marry a Muslim girl and be recruited through the community, as was the case with Omar Shafik Hammami, an American born to an Irish-American mother and Muslim father and was raised Southern Baptist. He converted in college, moved to Canada and married a Somali immigrant before traveling to Somalia to join in the jihad there.

"I actually saw him in a Somali mosque [in Toronto]," Shaikh recalls. "I thought, 'who is that white guy?' He had married into the community and then got dragged into Al Shabaab. That's how it works. They get into the network and the network drags them into something else. So it's not just Twitter," he adds, referring to the frequently-cited concern about Twitter, Facebook, and other social media sites where recruiting takes place. "It could be wherever."