Facing the truth about jihadist violence 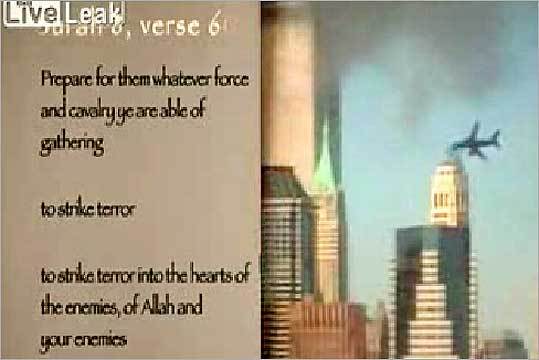 A screen capture from the film "Fitna" shows a verse from the Koran and the attack on the World Trade Center on Sept. 11, 2001.

THE GLOBAL jihad is unpleasant. Consequently "Fitna," the controversial new film about the Koran and jihadist violence produced by the Dutch parliamentarian Geert Wilders, is also unpleasant. Parts of it are graphic and violent, and you might find it difficult to watch.

But watch it you should, if only to remind yourself of two things the media are generally too intimidated or politically correct to dwell on: Jihadists are waging a bloody and barbaric war, and they are waging it with explicit reference to their religion.

Wilders's 16-minute film intersperses quotations from the Koran with scenes of Islamist atrocities, such as the Al-Qaeda attacks on New York and Madrid, the beheading of Nick Berg, and the "honor killing" of women. To drive home the point that such horrors are committed in the name of Islam by fervent Muslims, "Fitna" includes footage of Islamic preachers exhorting their followers to crush the infidels. ("Throats must be slit and skulls must be shattered," urges one. "This is the path to victory.") There are also clips indicating how pervasive such hateful indoctrination can be: In a scene aired on Saudi TV, a 3-year-old girl repeats what she has been taught: that according to the Koran, Jews are apes and pigs.

Yet what has been controversial about "Fitna" is not the abhorrent behavior it depicts, but that Wilders links such behavior to the Koran. Why that should be so notorious is unclear - after all, the jihadists themselves emphatically cite the Koran to justify their violence.

Nevertheless, "Fitna" has been widely condemned. The Dutch prime minister issued statements in Dutch and English saying the film "serves no other purpose than to cause offense." UN Secretary General Ban Ki-moon pronounced it "offensively anti-Islamic." The European Union's Slovenian presidency blasted it for "inflaming hatred.

From the Muslim world, naturally, came denunciations as well. Reuters reported that Iran's foreign ministry labeled the film "heinous, blasphemous, and anti-Islamic." The Indonesian government declared it "an insult to Islam." In Jordan, 53 members of parliament demanded the expulsion of the Dutch ambassador. The Organization of the Islamic Conference denounced "Fitna" as "a deliberate act of discrimination against Muslims" meant to "provoke unrest and intolerance."

Granted, there is nothing subtle about Wilders's film. Anyone who didn't know better might think after watching it that Islam is irredeemably violent, or that all Muslims seethe with religious hatred. Neither is true. "Like all great religions," the scholar Daniel Pipes has written, "Islam is subject to a number of interpretations . . . The terroristic jihad against the West is one reading of Islam, but it is not the eternal essence of Islam." Zealots who insist that Islam itself is the enemy condemn us, in effect, to a war without end. They also betray the anti-Islamist moderates of the Muslim world, who are as repelled by the fanatics as non-Muslims are.

Still, it isn't as though Wilders had to invent anything. The violence "Fitna" portrays is horribly real, and the fanatics who commit it are explicit in saying they do so as Muslims.

Where is the Islamic world's outrage against that? When has Iran's foreign ministry ever excoriated the beheading of a hostage, or the poisonous sermon of a jihadist imam, as "heinous, blasphemous, and anti-Islamic?" How often has the Organization of the Islamic Conference thundered its disapproval of "honor killings" or Islamist anti-semitism? When Theo van Gogh was murdered in public, when the Taliban turned Afghanistan into a repressive terror state, when fatwas were issued for the murder of Danish cartoonists - where was the chorus of Muslim anguish then?

Nor is "Fitna," whatever its flaws, as dangerously misguided as the eagerness with which Western governments rushed to denounce it. Panicked at the prospect of Islamist violence, desperate to appease extremists who respond to "insults" with mobs and mayhem, they ostentatiously deplored Wilders's exercise of free speech instead of defending it. They would never have reacted that way to a film that criticized Christianity or the United States or European tradition - and the Islamists know it.

Cringing before bullies is not the way to defend Western civilization. There is room for "Fitna" in the marketplace of ideas. Heaven help us if we are too timorous to say so.