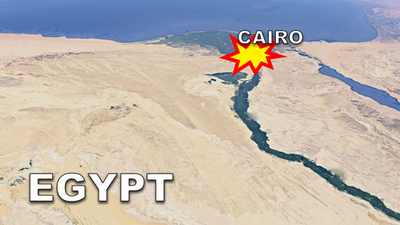 Its operatives detonated an "anti-vehicle explosive device" under a road "at the Maadi Autostrada south of Cairo... which led to the destruction of the military vehicle and the killing of two officers and the wounding of three other soldiers who still fighting death," said a Hasm Movement statement released shortly after the attack and translated by the Investigative Project on Terrorism (IPT).

Intelligence collected by Egypt's interior ministry suggests that the Muslim Brotherhood is establishing "terrorist entities," including the Hasm Movement and others, to carry out attacks in an attempt to conceal the Brotherhood's responsibility.

In May, Najah Ibrahim, a former leader of the terrorist organization Gamma'a Islamiya, revealed these terrorist offshoots consist of Muslim Brotherhood youth seeking to escalate violence against the Egyptian regime. Ibrahim told al-Hayat news that some Brotherhood leaders encouraged the terrorist groups to commit violence, according to an IPT translation.

Part of the terrorist group's justification for Sunday's attack alluded to Egypt's controversial and impending transfer of two small islands in the Red Sea to Saudi Arabia.

"The continuation of the criminal coup [Egyptian] regime in selling the homeland, giving up its land and capabilities ... obliges us to undertake more resistance activity to tear them off the chest of this helpless people," the statement said.

Muslim Brotherhood figures continue to engage in violence incitement and encouraging others to conduct terrorist attacks.

In April, a senior Muslim Brotherhood member, 'Izz Al-Din Dwedar, called for an "intifada" targeting Egyptian embassies around the world, in a Facebook post translated by The Middle East Media Research Institute (MEMRI).

In protest of death sentences handed to members of the Brotherhood in Egypt, Dwedar suggested for violent action on May 3.

Egyptians abroad should "protest [outside] Egyptian embassies and lay siege to them, and steadily escalate [their actions], up to and including raiding the embassies in some countries, disrupting their work and occupying them if possible, in order to raises awareness to our cause," Dwedar wrote.