Female genital mutilation (FGM) can be an effective tool to prevent promiscuity among girls, the imam at a prominent northern Virginia mosque claimed in a recent lecture flagged by the Middle East Media Research Institute (MEMRI).

Without it, "hyper-sexuality takes over the entire society and a woman is not satisfied with one person or two or three," said Dar al-Hijrah Islamic Center Imam Shaker Elsayed in a May 19 talk, "Foundation of a Happy Family." Only tip of a girl's clitoris should be cut, he said, otherwise it creates "serious harm in the sexual life of the child when she grows up. And this is why the West thinks of alkhikah as sexual mutilation..."

Muslim societies which prohibit FGM are making a mistake "to prohibit the tradition and they end up causing a lot of damage on the other extreme side of the sexual life of a woman," Elsayed said.

He isn't the only prominent voice in the U.S. Muslim community endorsing female genital mutilation. The Assembly of Muslim Jurists in America (AMJA) endorses the practice in two fatwas posted on its website, using justifications similar to Elsayed's. While not required, one fatwa says, "it is considered an honorable thing for females."

Islamist advocates argue that FGM has nothing to do with Islam. 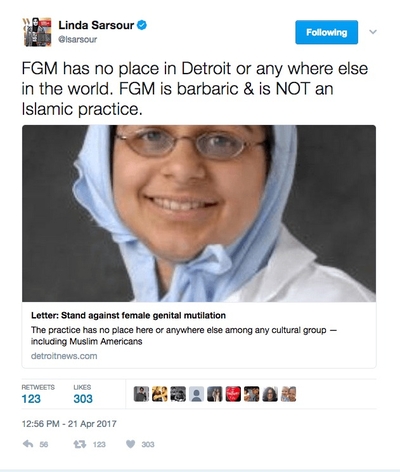 "FGM has no place in Detroit or anywhere else in the world. FGM is barbaric & not an Islamic practice," Sarsour wrote.

She should target that message to its proponents. Sarsour spoke at a fundraiser at Elsayed's mosque six days before his talk on female anatomy and promiscuity. FGM did not come up, but Sarsour described Islam's prophet Mohammed as "a feminist in his own right."