Two Chicago area men face up to 20 years in prison if convicted of providing material support to ISIS Joseph D. Jones and Edward Schimenti, both 35, were arrested Wednesday morning. They tried to provided ISIS cellphones and personnel, an FBI affidavit alleges.

The supplies were given instead to an FBI informant. Jones, aka "Yusuf Abdulhaqq," and Schimenti, aka "Abdul Wali," thought the phones would be used to detonate improvised explosive devices (IEDs). Jones told an undercover FBI employee he declared his allegiance – or bayah – to ISIS leader Abu Bakr al-Baghdadi.

They also worked to help the informant travel overseas to fight for ISIS and encouraged him to get into fighting shape, the affidavit said. Jones and Schimenti told the informant to be careful and avoid law enforcement detection.

The sting began in September 2015, when Jones met an undercover FBI employee. The meeting took place inside the Zion Police Department, where Jones was being interviewed about a friend's recent murder. Both Jones and Schimenti expressed support when the undercover later said he wanted to join ISIS.

Other undercover agents tricked Jones and Schimenti into thinking their new friend did make it to Syria. 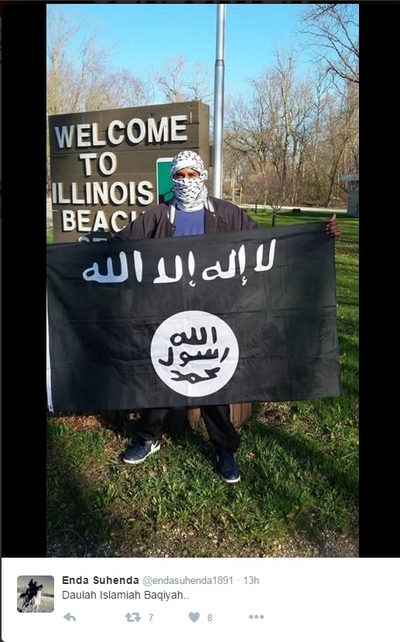 A year ago, Jones and Schimenti posed for pictures holding an ISIS flag at the entrance to the Illinois Beach State Park in Zion, Ill. Jones sent the picture to another undercover FBI agent with whom he communicated online. ISIS supporters also posted the image after a fourth undercover FBI employee asked Jones' permission to share it via social media.

Schimenti made similar posts using the Google + account "Ed Schimenti." "Kuffar [unbelievers], we are coming to slay you," Schimenti wrote in an April 2015 post.

In February, Schimenti and Jones met the informant for a workout at a Zion gym. When the informant said the workout would help prepare for fighting, Schimenti responded, "Right, right, right...it's about that strength and that endurance."

Jones and Schimenti worked with the informant last month to collect cellphones. They believed the phones would be sent to ISIS and used as bomb detonators. Last week, the two drove the informant to O'Hare Airport, thinking he was traveling to Syria to fight for ISIS.

Jones said he was ashamed not to be going, too. Schimenti said he wanted the informant to "drench that land with they, they blood."