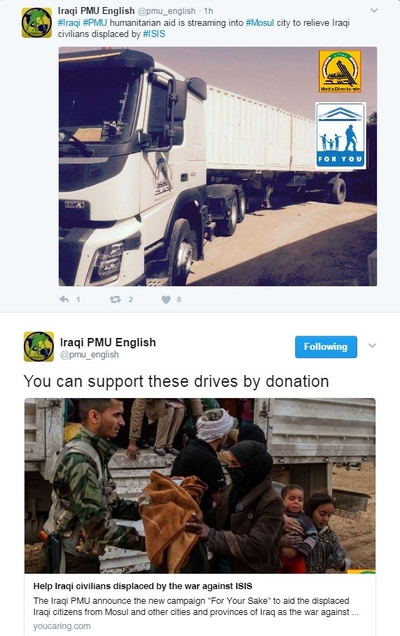 Using its English name, the "Iraqi Popular Mobilization Units," Hashd al-Shaabi solicited money for "the new campaign 'For Your Sake' to aid the displaced Iraqi citizens from Mosul and other cities and provinces of Iraq as the war against ISIS rages."

It called on Iraqis to help with Internally Displaced Person (IDP) camps housing ISIS victims and invites foreigners to donate to its effort. The site directs non-Iraqis to a Gmail account to help Hashd al-Shaabi's alleged relief effort in Iraq.

Iraq's government officially recognized Hashd al-Shaabi as an arm of its armed forces in November. This happened even though the Iranian Revolutionary Guard Corps (IRGC) Quds Force – listed by the U.S. Treasury Department as a specially designated terrorist – closely coordinates Hashd al-Shaabi's activities. The U.S. State Department lists Kitaib Hizballah, a component of the coalition, as a foreign terrorist organization.

"Technically, and I'm not a lawyer, but given U.S. registered terrorist entities are part of al-Hashd al-Sha'abi, this could be a form of material support," Smyth said. "As for where the money may go, there's no way to track that either if you're just some random guy at home who wants to help refugees."

Hash al-Shaabi has used social media and television for recruiting purposes for some time, Smyth said.

YouCaring expressed alarm when contacted by the Investigative Project on Terrorism (IPT). It subsequently deleted Hashd al-Shaabi's account and adapted its algorithm to prevent it from creating new accounts. The account had collected $200.

"Our Trust and Safety team has been actively investigating this fundraiser since it launched yesterday. We have robust algorithms in place to check if a campaign is in violation of our policies. Each fundraiser is thoroughly investigated by our Trust and Safety team – this fundraiser was flagged for removal this morning as it was in violation of our policies. We take a hardline stance on fundraisers for militia groups. It was removed," YouCaring Online Marketing Director Jesse Boland told the IPT in an email.

"This organizer has been blocked from starting fundraisers in the future."

That might be true for Youcaring.com. But Hashd al-Shaabi resurrected its fundraising campaign on the Canadian crowdfunding site FundRazr using the same contact information and text it used earlier.