They Teach Our Children, Advise Our Government, And Support Jihad 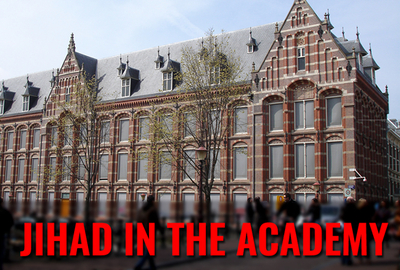 Since the rise of ISIS as an Islamic extremist group, and certainly since its leader, Abu Bakr al-Baghdadi, declared the official creation of the caliphate, researchers and intelligence groups worldwide have noted its popularity with Muslim women, even in the West. Unlike other terrorist groups, ISIS has pointedly recruited women. And many women have, on their own, found the promise of life in the Islamic State particularly appealing.

Along the way, researchers and intelligence agencies have argued that the Muslim women who join ISIS, especially those who travel to Syria from the West, take active roles in ISIS's jihad. While they are largely barred from fighting on the battlefield, women have enrolled in the al-Khansaa brigade, the women's moral police force which enforces strict codes of dress and public behavior. Al-Khansaa officers regularly arrest and beat women who violate sharia-based modesty laws or who appear in public without a male companion. Other women raise their sons to be jihadists, or bring their children with them from the West in the hopes that they, too, will grow up to support the Islamic State and its jihad.

Now a young Dutch researcher, Aysha Navest, has come out with a different theory based on interviews she held with over 22 women now living in the caliphate. Navest, who is affiliated with the University of Amsterdam (UvA), says she knows several of those women. They reveal a very different portrait of the so-called "ISIS brides:" girls who are not recruited for jihad, but who willingly and eagerly make the perilous trip to Syria, where they live peaceful, happy lives as homemakers, mothers, and wives. Her findings appeared last April in the journal Anthropology Today, a peer-reviewed publication of the Royal Anthropological Institute.

There is just one problem: Aysha Navest allegedly also recruits women for the Islamic State.

This is the conclusion of journalists at the Dutch national daily NRC Handelsblad, who matched Navest's birthdate, hometown, children's first names and other identifying details with those of "Ought-Aisha," a woman posting messages on the Dutch-Muslim website Marokko.nl. And according to "Ought-Aisha" (or "Sister Aisha"), life in the Islamic State is simply grand. In various posts, she has praised suicide bombers, honored Osama bin Laden, and insisted that jihadists will find rewards in Paradise. Additionally, the NRC reports, in Facebook posts she has referred to Shiites and apostates as "people who rape our women, torture our men, and kill our children."

Unsurprisingly, the NRC's findings put renewed focus on Navest's reports and the nature of her research, which was performed under the tutelage of two well-known UvA professors – anthropologist Martijn de Koning and Modern Islamic Culture professor Annelies Moors. Both De Koning and Moors now admit that Navest's subjects were interviewed anonymously, largely via WhatsApp, and that she did not share the women's names even with them – a departure from standard research practices that call for transparency. Even so, according to Elsevier, they stand behind her research.

Others, however, voice considerable skepticism. The Dutch intelligence agency AIVD dismissed Navest's report from the outset, noting that her conclusions stood in stark conflict not only with their own, but with other studies by UvA scholars. The UvA has now called for an independent investigation into Navest's background and the reliability of her work.

Even fellow academics have been scathingly critical. In his column for Elsevier, Leiden University Professor of Jurisprudence Afshin Ellian observed that as a result of Navest's online postings, "in normal situations, she would end up in prison for incitement to violence and hate with terrorist intentions." Instead, the conclusions of her "research" showing that women do not join directly in jihad but simply enjoy idyllic lives as wives and mothers in the Caliphate, represent "the manner in which she pursues her own jihad: by pulling a smokescreen before the eyes of the unbelievers."

But the situation also exposes a larger problem within academia internationally. In many institutions, subjectivity clouds social research, while students' minds are too-frequently shaped by anti-democratic, anti-Western, and – worse – truth-challenged ideologues. For example, at UvA, De Koning has long been accused of sympathizing with Islamic extremists. Among other things, he co-authored a book describing Salafism as a "utopian idealism."

Likewise, at Kent State University, the FBI is reportedly investigating history professor Julio Pino for ties to the Islamic State. A Muslim convert, Pino has made provocative comments on campus and in university-based newspapers, including shouting "Death to Israel" during a lecture by a former Israeli diplomat. In a letter to a campus publication, he declared "jihad until victory!" On Facebook, Pino once described Osama bin Laden as "the greatest." He also posted a photograph of himself in front of the U.S. Capitol Building, adding the caption "I come to bury D.C., not to praise it," Fox News reports.

Kent State officials say they "distanced" themselves from Professor Pino, whose tenured position poses legal challenges to dismissing him from the faculty.

In contrast, at nearby Oberlin, Assistant Professor Joy Karega's Facebook posts calling ISIS an arm of American and Israeli intelligence agencies and blaming Israel for the attacks of 9/11 were enough to get her fired from her job teaching Rhetoric and Composition. As the industry newspaper Inside Higher Ed reported, despite initially defending her right to academic freedom, Oberlin officials ultimately determined that, "Beyond concerns about anti-Semitism, which fit into larger complaints about escalating anti-Jewish rhetoric on campus, Karega's case has raised questions about whether academic freedom covers statements that have no basis in fact."

Then there is John Esposito, Georgetown University's professor of Religion and International Affairs and Islamic Studies. An extensive Investigative Project on Terrorism investigation into Esposito's activities found that he has used his position to "defend radical Islam and promote its ideology- including defending terrorist organizations and those who support them, advocating for Islamist regimes, praising radical Islamists and their apologists, and downplaying the threat of Islamist violence." He refuses to condemn Hamas and, according to the report, "remains a close friend and defender of Palestinian Islamic Jihad board member Sami Al-Arian."

Al-Arian ran the PIJ's "active arm" in America while working as a University of South Florida professor.

Like Navesh, Esposito seems to want to aim his work beyond the ivory towers. He has spoken on Islam to the State Department, the FBI, the CIA, Homeland Security and other government offices. Similarly, Navesh hoped that her "research" would help shape policy in the Netherlands, encouraging courts to issue lighter sentences on women who returned home from the Islamic State. After all, they hadn't engaged in terrorism. They'd only lived in domestic bliss abroad. Where's the crime in that?

None, of course, if it were true. But it is not.

There is nothing new, of course, in respected journals publishing flawed research by people who aim to shape public policy or opinion – the infamous and now-debunked Andrew Wakefield study that claimed to link autism to vaccines is a prime example. But such examples only underscore the challenges, and the need to investigate better the accuracy of scholarly reports as well as the integrity of those who write them. Islamic jihad, after all, is not just about destroying our lives, but about destroying our culture. In the face of the "smokescreens" of that jihad, intellectual vigilance will be our strongest shield.