Why the UK's Sharia Courts Should Be Banned 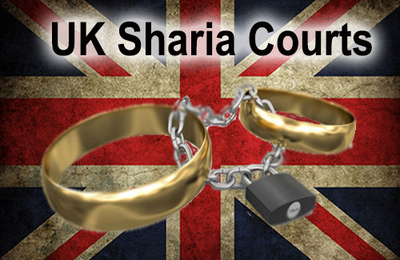 They are married off at 15 to men they've never met, men who may beat and rape them, or who do not permit them to leave the house. Or they marry out of love, only to learn their new husband has another wife, or plans to take one. And so they seek counsel – and escape – not through lawyers and the traditional courts, but through sharia councils, and not in Kabul or Islamabad, but in Manchester and London.

Now officials in the United Kingdom are questioning whether such councils violate secular laws and discriminate against the women who come to them for help. While still Home Secretary last March, before she became Prime Minister, Theresa May initiated the first of an ongoing series of investigations into Britain's so-called "sharia courts."

Subsequent hearings have brought the issues into the public eye, but so far they have failed to provide any real resolution. Some sharia court opponents contend that they force women to remain in abusive marriages, or deprive them of their legal rights regarding division of property and other matters. In contrast, some proponents insist that too many Muslim women would be forced to stay in abusive relationships if these tribunals were shut down.

"If I went to an English court, [my ex-husband] would say 'where is their right to decide about my life?'" one Muslim woman told the BBC. "Now he can't say anything because the decision has been made using sharia law, and we all believe in that."

Moreover, an estimated 30 to 40 percent of British Muslim marriages are religious, not civil – a fact which in itself deprives these wives of many of their legal marital rights. Such marriages can be dissolved only through the tribunals.

But opponents, such as Iranian-born activist Maryam Namazie, argue that the tribunals, "are linked to the rise of the Islamist movement." Others echo her views, such as Women and Sharia Law author and Zurich University Professor Elham Manea, who claims that the first such councils were established by Islamist groups.

There is some validity to this claim: the first British sharia council was established in 1982 by the Islamic Sharia Council, a Luton-based organization currently led by controversial imam Suhaib Hasan. Among Hasan's many claims to fame are his lectures, available on YouTube, which he says "expose" the Jewish conspiracy to destroy Christians.

Moreover, while the official count of the councils in the UK is set at 32, think tank Civitas has estimated the real number at 85, suggesting that many operate in the shadows. How conservative or how westernized they may be in their mediations is impossible to know. Of the councils that are officially recognized, most are affiliated with mosques. Others hold connections to the Islamic Sharia Council, which also offers counseling "in accordance with the Holy Qur'an and authentic sunnah," and "anger management" sessions that teach clients to "deal with the situation in a way that is most pleasing to Allah."

According to France 24, 90 percent of the cases before Britain's sharia tribunals involve divorce. But Algerian activist Marieme Hellie Lucas told Namazie in an interview, "The 'laws' used by so called 'sharia courts' are not [even] religiously inspired. They are just the choice that fundamentalists implement between contradictory (even antagonistic) customs, mores, and conservative religious interpretations."

In fact, Lucas says, ""fundamentalists are the ones who create, sometimes ex-nihilo [from nothing], the dilemma 'faith vs. women's rights,' while many progressive theologians state that they see no contradiction." Hence, Lucas maintains, allowing such tribunals comes down to favoring "the Muslim fundamentalist extreme-right agenda to the detriment of universal rights."

Additionally, UK sharia expert Denis MacEoin has found many of the tribunals' rulings "advise illegal actions and others that transgress human rights standards as they are applied by British courts."

Women who have had experience with UK sharia tribunals echo concerns raised by MacEoin and Lucas.

For example, one widow told the Independent that subsequent to her husband's death, her sons had insisted she sell her home and give the money to them. A sharia tribunal had evidently told them that "in English law, I own the house I live in, but this is not the way in Islam." Despairing, she added, "what is this new Islam that can threaten to take the roof from the head of an old woman like me?"

And in a four-year investigation of British sharia councils, human rights activist Elham Manea "found clerics that ignored marital rape, condoned wife beating, and believed girls of 12 or 13 were old enough to marry," the Independent reports. No wonder, then, that MEP Baroness Sheela Flather, in written testimony to a Parliamentary panel investigating the tribunals, argued that laws that apply "to white people [should] apply to everyone. "It is racism," she declared, if they do not.

Despite these facts, many continue to maintain that banning these tribunals could do as much harm as good. Rather, they advocate oversight and reform of the existing councils to ensure that they reflect and administer equal rights under secular laws. "Though some scholars argue that a civil divorce should count as an Islamic one, this hasn't been widely accepted yet within the Muslim communities," Muslim Women's Network UK director Shaista Gohir told VICE news recently.

But herein lies the core of the problem. Indulging those who do not accept the authority of civil over religious law does nothing to help integrate those who espouse such beliefs. Instead, this approach extends a kind of exceptionalism to Muslims, especially fundamentalist Muslims, permitting them to exist outside of civil law, while lending support to radical beliefs that the laws of the land do not apply to them: only sharia does.

True, as Namazie has observed, "Abolishing Sharia courts and parallel legal systems will not solve all the problems at hand; criminalising FGM or domestic violence has not ended them either. It will however make very clear what is acceptable and what is not and will underline a commitment to gender equality."

Which is why allowing the oppression of Muslim women in our communities to continue is not protecting Muslim rights, or even Muslim identity. Therefore, banning these sharia "courts" is necessary. If we do not demand equality for women and the respect for one secular, civil law in our society for all, who will?