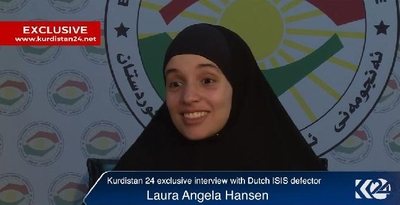 This is Laura Hansen's story.

It may also be the story of the future of Islamic terrorists in the West.

Born and raised in the quiet Dutch city of The Hague, Laura Angela Hansen was 17 when she converted to Islam in 2012. She married a Dutch-Palestinian man seven years her senior whom she met through a dating site for Muslims and quickly became pregnant. She also became the victim of his abuse; neighbors repeatedly called police to their home, fearing not only for Hansen but for her four-year-old daughter, evidently from a previous relationship.

But life improved once her son Abdullah was born, Hansen later explained in an interview with Kurdistan24. In September 2015, her husband suggested they take a family vacation to Turkey, where they might also give money to Syrian refugees.

It didn't turn out quite that way. Instead of going to the refugee camps, Hansen told Kurdistan24, her husband led her into Syria, where she was brought into a house guarded by "men with beards and guns." From there, she and her husband were transferred to Mosul, where, she said, she tried many times to "flee from the hell in which I was living."

She succeeded in July, escaping both her husband and the Islamic State and finding sanctuary with her children among the Peshmerga forces. Through them, she was able to return in early August to the Netherlands, where she was immediately taken into custody.

That, anyway, is Laura Hansen's story as Laura Hansen has told it, both to her lawyers and to the press. But like all stories, Hansen's has another side: the public prosecutor's.

Based on Hansen's own previous statements on social media and some of her activities shortly before she and her family departed for their Turkish "holiday," prosecutors say the now-21-year-old knew exactly where she was going and indeed was happy to make the trip. They cite her response to a beheading video sent her by her father, presumably to dissuade her from joining the Islamic State. Chatting with him on Facebook, she insisted, "these people have to be removed. Eye for eye, tooth for tooth."

Moreover, despite telling Kurdish television that she suffered in the "hell" of the Islamic State, she has neither said anything about her experiences, nor has she outright condemned ISIS, since her return. While she no longer wears a hijab and allegedly now eats pork, appearing to have turned her back on Islam, no threats have been made against her on Islamic State social media sites. And she has not been accused by others of being an infidel – a situation some prosecutors find perplexing, if not suspicious.

Faced with her ongoing silence, the public prosecutor's office questioned her current motives during a recent hearing. Either she is a naïve woman who is genuinely renouncing her jihadist past, they said, or she's been sent back to execute an attack, and the "reformed" Laura is a ruse to throw off investigators.

Hansen did not respond.

"Only she really knows," Wim de Bruin, a spokesman for the public prosecutor's office said when reached by phone. "We can't answer either way at this point."

For the moment, then, Hansen is being held on charges of participating in terror activity and support of a terrorist organization, though prosecutors have said that "so long as Laura explains nothing, we will assume the worst-case scenario."

Recent events add support to the prosecutor's suspicions. Numerous reports point to the possibility that Islamic State leaders will lean increasingly on women and even children to join in their now-faltering ambitions – including allowing women to join a battlefield that was previously off-limits to them. And the Islamic State "is using increasing numbers of women to evade security measures and spearhead a wave of attacks across Europe and the Islamic world as it loses territory in the Middle East," the Guardian reported last month.

Such efforts also seem to include a renewed focus on attracting women to the cause. In Amsterdam, for instance, police recently arrested a so-called "loverboy" for seducing girls he then recruited for jihad.

The endeavors have already paid off. In Morocco, 10 young women, all in their teens, were arrested in October and charged with planning suicide attacks. All had allegedly sworn allegiance to the Islamic State.

"This is the first time we have found a terrorist cell that was entirely composed of women," Abdelhak Khiame of Morocco's Central Bureau of Judicial Investigations told the Guardian.

In Paris, French police arrested four women in September for allegedly planning to bomb the Gare de Lyon. At least two of those women were, like Laura, converts to Islam.

In San Bernardino, Tashfeen Malik played the central role in the jihadist killing of 14 last December. She allegedly fired the first shots in the attack, and possibly helped radicalize her husband, U.S.-born Rizwan Farook.

And according to Dutch journalist Brenda Stoter, who has reported extensively from Syria and Iraq, two new training camps for women have opened near Raqqa in the past year.

Moreover, as European law enforcement cracks down on those they suspect of planning to leave for Syria, Stoter reports, some – including young women – are likely "to seek out alternatives to supporting IS."

"The repeated calls of IS leaders to execute attacks in their own countries don't only reach male sympathizers," she notes.

For law enforcers, the situation poses any number of risks. On the one hand, there is the obvious danger in letting a returnee go free, but there is also the concern that, by imprisoning someone who claims she wants to rejoin Western culture, they inadvertently reignite her resentment and anger, turning her against us once again.

All of this makes Laura Hansen's story more urgent. Dutch prosecutors say they want to make her "an example." But if she has genuinely apostatized, or if her experiences in the Islamic State have led her to renounce radical Islam and violent jihad, she would be just the example Western Muslim women need right now.