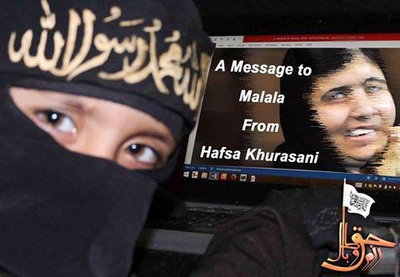 In an audio message allegedly posted by al-Qaida in Pakistan, a young girl jihadist calls on Malala Yousafzai to renounce Western education and adopt the path of Allah as laid out in the Muslim holy book Quran and the Sunnah (teachings of the Prophet Mohammad).

Yousafzai's activism on behalf of education for girls made her a target for radical Islamists. She was shot in the head by a masked Taliban gunman in 2012 while riding her school bus home.

In 2014, Yousafzai, then 17, became the youngest person to win the Nobel Peace Prize for standing up against Taliban attacks on western education in her hometown in northwest Pakistan.

The new recording indicates Yousafzai remains a target, and that jihadists are indoctrinating children into supporting terror and opposing education.

"It takes a person close to Allah, only creator, and guides us to fulfill the purpose of our creation and that is to establish Khilafah on the earth of Allah," the girl jihadist, identified as Hafsa Khurasani, can be heard telling Malala.

Only "following the law of Allah can bring happiness in our lives and peace in this world" and is the "right education," the girl said.

"The one you call education is not the right education because you got it from the Kuffar [infidels] who are jahil [ignorant]."

The message concludes with Khurasani calling on Malala to "come back home" and join her and her sisters at their madrassa in Khorasan, a region dominated by hard-core al-Qaida jihadists that relocated to Pakistan following the 2001 defeat of the Taliban in Afghanistan.